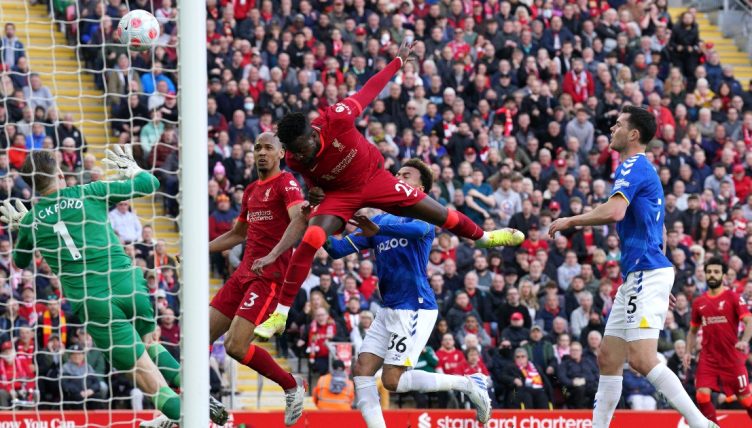 Liverpool’s quadruple hopes remain alive thanks to their victory in the Merseyside derby and it was cult hero Divock Origi – who else? – that proved the scourge of Everton once again.

Origi was introduced to help change the game at the hour mark when the game still remained goalless, with Liverpool left frustrated after a determinedly dogged and defensive display from Frank Lampard’s side.

But it took barely any time at all for the Belgian to change the game. He had a key role in the build-up for Andrew Robertson’s opener, and scored the second as Liverpool secured a vital 2-0 victory. The three points keep Liverpool right on Manchester City’s coattails in the Premier League title race.

“We will never miss a player like him because if he leaves, he will explode wherever he goes. He is a world-class striker, he is a legend and will stay a legend forever,” Klopp told Sky Sports after the victory.

“He doesn’t always make the squad which is ridiculous, but he is there when we need him every time. He was involved in both games; everything that we did in the second half, without Divock, wouldn’t have happened.

“The group lives because of the boys that don’t always play, they are the strongest players ever; [Alex] Oxlade-Chamberlain, [Harvey] Elliot, [Takumi] Minamino, even Rhys Williams. They are in great shape, but the way they behave is why we do these kind of things.”

Here are 10 amazing stats from Origi’s time at Liverpool.

– Origi has scored six goals from 10 appearances in the Merseyside derby. He’s scored twice as many goals against Everton than any other side in his playing career.

– The Belgian averages a goal every 56.5 minutes against Everton in the Premier League.

– Despite only being introduced in the 61st minute, Origi completed more passes (nine) than seven of Everton’s starting XI. Demarai Gray was the only Everton player to register more attempts at goal.

🗣 "I will never ever miss a player more than Divock Origi, he'll explode wherever he goes, he is a world class striker."

Jurgen Klopp says Divock Origi is a legend and will stay a legend forever pic.twitter.com/XZJKhUZmo7

– His all-important pre-assist for Liverpool’s opener in their latest 2-0 win over their city rivals came within just a minute of his introduction. The lay-off to Salah was his first touch.

– 12 (30%) of Origi’s goals for Liverpool have come as a substitute. Half of his six goals against Everton have come after he was introduced from the bench.

– All four of Origi’s injury-time goals for Liverpool have proven important. His first in the 96th minute against West Brom was an equaliser in a 2-2 draw. His second was his famous Merseyside derby in the 96th minute against Everton. His 94th-minute equaliser against Arsenal in the League Cup made it 5-5 and Liverpool went on to win on penalties. The latest was his 94th-minute match-winner in the 1-0 win at Wolves in December.