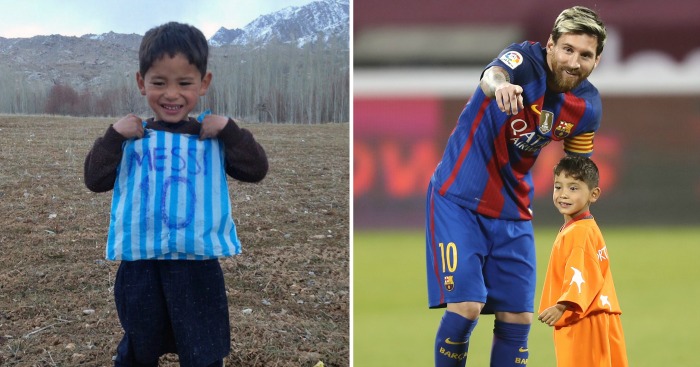 Most people’s perceptions of professional footballers is not great, but many top players do an enormous amount of good off the pitch which is often overlooked.

Ask the Average Joe on the street what they think of footballers and you are likely to get a positive response, but that is very much a case of the foolishness of a small minority tarnishing the reputation of the majority.

As this lot have proven over the years, there are plenty of good eggs out there…

Ronaldo is often criticised for appearing self-indulgent on the pitch, but the truth off the pitch could not be further away from the public perception of the Real Madrid star.

In 2015 Ronaldo was named the most charitable athlete in the world for the vast sums of money he donates to various causes, including £53,000 to pay for a 10-month-old baby’s operation and the funding of a nine-year-old cancer patient’s medical bills.

A research centre at the hospital where Ronaldo’s mother was treated for cancer was also funded by the Portuguese’s £105,000 donation.

Few images relating to football have been as striking in recent years as that of five-year-old Murtaza Ahmadi wearing a blue and white plastic bag with “Messi 10” scrawled on the back in an attempt to emulate the Argentina superstar.

Messi eventually made the Afghan boy’s dream come true when he met Murtaza in 2017.

The story of Bradley Lowery touched millions of people around England.

But nobody made the five-year-old smile as much as his “best mate” Defoe, who first visited Bradley when he was being treated at the Royal Victoria Infirmary in Newcastle, and even led out the England team with his new inspiration by his side.

Wilshere was among a number of players who offered their support to Jack Marshall, who tragically died aged six after being diagnosed with a brain tumour.

The England international kept in close contact with Marshall’s family, inviting them to Arsenal matches and even to his own family home, and when he found out Jack’s brother, Josh, was being bullied and had been beaten up in his local park, Wilshere travelled to Scunthorpe to play football with Josh in the same park in front of the bullies.

Kone found himself in the limelight in 2017 after saving the life of Bohemians 1905 goalkeeper Martin Berkovec, who had been knocked out after colliding with a team-mate.

Kone immediately ensured Berkovec could not choke on his own tongue. Remarkably, it was the fourth time the striker has done so during his eight-year career.

Robertson came across the tale of Alfie Radford, who gave up his own pocket money to buy some food for a foodbank situated outside Anfield.

The left-back sent the young supporter a letter, accompanied with a signed Roberto Firmino shirt, because “nobody wants the left-back’s shirt”.

Finding out his compatriot’s dream was to meet Salah, the Liverpool forward is in regular contact with him, and is paying for his treatment.

Not a stranger to a kind gesture, Salah has also donated to the Association of Veteran Egyptian Players and turned down a luxury villa as a reward for getting Egypt to the World Cup, instead asking businessman Mamdouh Abbas to donate to his home village.

One of the most famous football players of all time, Beckham has been an ambassador for UNICEF since 2005, while he has also helped raise millions of pounds for the charity through his own foundation, the 7 Fund.

“David has given significant funds personally. The 7 Fund supports programmes for children, tackling issues such as malnutrition, violence, AIDS and emergencies,” UNICEF said earlier this year.

Lots of these stories involve children, and it is easy to forget that people out there who have watched a club for generations idolise the players just as much as 10-year-olds in the park.

Step forward David Burns, who at 74 was granted his one wish when Kompany came round to his house to meet the terminally ill man, chatting to him for over an hour about the pair’s experiences of the Blues.

Watmore made headlines in March 2017 when he helped rescue the lives of three holiday makers after a boat crash in the Caribbean.

The collision took place when a speedboat Watmore and his girlfriend were travelling on just off the coast Barbados was hit by a speeding catamaran.

The duo were knocked into the sea along with the three elderly passengers, but Watmore helped the others while they waited for the coastguards and used his t-shirt to stop the bleeding on a severe leg cut one had suffered.

“It was scary, life or death,” one rescued passenger told The Sun.

“Duncan helped everybody to get on to the boat — he couldn’t have been nicer.”

De Roon got the train back to the North East with Middlesbrough’s fans after their match at West Ham in the 2016-17 season, before paying for a taxi from Darlington with more fans.

The Dutchman also turned up to Henry Baines’ house to help the young supporter with his homework after he had written to the midfielder.