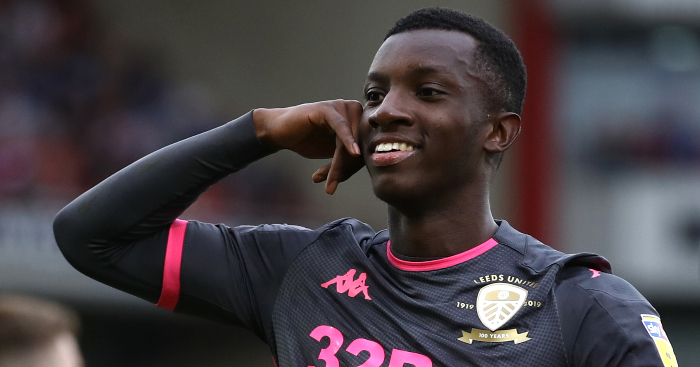 Arsenal striker Eddie Nketiah is yet to start in the Championship on loan at Leeds United, but he’s already a firm fan’s favourite with cries of “Eddie! Eddie!” every time he steps onto the pitch.

Nketiah has had to bide his time for opportunities at Elland Road, but he’s getting harder to ignore due to a remarkable goalscoring record in recent months.

The 20-year-old bagged his first Premier League goal on the final day of the 2018-19 campaign, scoring the Gunners’ third as they ran out 3-1 winners at Burnley before goals against Fiorentina, Bayern Munich followed in pre-season. He’s not lost that momentum, either, as these stats show.

The striker’s clinical hat-trick for England’s Under-21s against Austria took Nketiah’s total tally to 12 goals in all competitions this season, which isn’t bad going for a player awaiting his first league start.

Marcelo Bielsa has tended to keep the faith in Patrick Bamford, who has earned plaudits for his all-round play and was recently named man of the match as Leeds beat West Brom 1-0 to briefly move top of the league.

Bamford has four goals this season, but he’s failed to find the back of the net since August, going through a six-match goal drought. Nketiah, meanwhile, just seems to have a natural knack for scoring goals.

He’s also scored in both of his starts in the League Cup, roughly maintaining that average (a goal per 82.5 minutes) for Leeds’ senior team overall.

Things aren’t much different at international level, as he’s similarly prolific for the Young Lions. He averages a goal every 50 minutes for the Under-21s this season, scoring five goals in three games.

He’s previously scored hat-tricks for the Under-18s and Under-19s, and he’s now scored eight in eight for Aidy Boothroyd’s Under-21s – that’s as many as Harry Kane scored at that level, and five off the record jointly held by Francis Jeffers and Alan Shearer.

Also finding the back of the net when given a run-out for Leeds’ Under-23s, Nketiah’s overall goal average this season – taking into account all his minutes at all levels for club and country – is a goal every 56 minutes.

For reference, Premier League top scorers Sergio Aguero and Tammy Abraham average a goal every 70 and 72 minutes respectively. The leading goalscorer in Europe so far this season, Robert Lewandowski, averages a goal every 64 minutes for club and country.