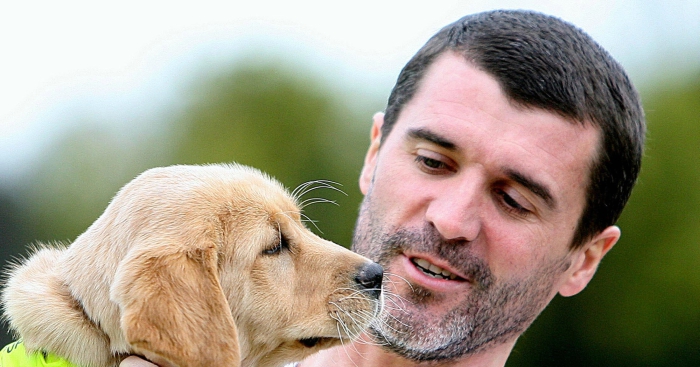 Eric Lichaj made headlines after getting a new dog in January 2018, but he certainly isn’t the first player to have made known his love for man’s best friend.

#GetEricADog became a popular hashtag after Lichaj’s heroics in Nottingham Forest’s FA Cup victory over Arsenal, and the likes of Roy Keane, Alexis Sanchez and Harry Kane have all previously expressed their affection for their hounds.

We’ve taken a look at eight of the best stories involving football and dogs. Now this is what you call content.

Slaven had a hard time at the 1990 World Cup with the Republic of Ireland, spending the whole tournament on the bench. Jack Charlton’s men may have reached the knockout stages, but by that point Slaven was beginning to miss his dogs.

“I became a figure of fun when I called home on that trip,” the former Middlesbrough forward recalled. “While others were speaking to their wives, I would go on the phone and say, ‘Put the dog on.'”

Tony Cascarino roomed with Slaven in Italy, and painted quite the picture in his autobiography. “I’d be sitting in the bed alongside and Bernie would be howling like Lassie into the phone: ‘Woof, woof, aru, aru, woof!’ He’d be kissing the receiver and lavishing affection – ‘Hello, lovey dovey’ – on a dog! The first time it happened, I nearly wet myself.”

Fittingly, Slaven had found out he had been selected for the squad while he was walking his dog, and once left Ayersome Park after being substituted at half-time to go for a stroll with his best friend.

“I could see the floodlights and hear the crowd from where I was walking, which was surreal.”

The thought of domestic life with Roy Keane is actually quite frightening. Imagine being sat around the table for Christmas dinner with Keane quietly snarling in the corner while you nervously dish out his pigs in blankets.

For a midfielder whose bite matched his bark, it makes complete sense that the former Manchester United captain seems to bond so fiercely with his dogs.

Triggs was his most famous companion, and even released “a hard-hitting, warts and all memoir” in 2013.

After being asked about the death of the labrador retriever, Keane offered a rare glimpse of humanity into his stony soul – albeit with a typically forthright threat added on: “You will have me crying in a minute, so be careful.”

Sanchez is never one to hide his love for his two dogs, Atom and Humber, so much so that Arsenal fans decided to make a banner of the duo in the hope it would persuade the Chilean to stay at the club.

Those fans are probably a little bit embarrassed whenever they look at the massive banner of two dogs hanging in their living room these days. Maybe they can paint it blue and send it to Manchester.

They actually made the banner for Sanchez's dogs. pic.twitter.com/CpqiG4PsJQ

The whole country waited with bated breath as Lichaj revealed after his two-goal heroics for Nottingham Forest against Arsenal: “My wife told me this year if I ever got a hat-trick I’d get a…dog.”

Lichaj was denied the chance of a hat-trick after being refused the chance of taking one of two penalties, but a Twitter campaign saw his wife eventually crack, and they recently welcomed the newest member of the family.

Wanted to show everyone the newest member of the Lichaj family…. Gunner. Thank you everyone for for pushing @KatPerko in the right direction! #erichasadog pic.twitter.com/SoTKiYiVMR

When you think of the heroes of England’s 1966 World Cup triumph, you think of Geoff Hurst’s hat-trick in the final, Bobby Charlton’s combover and Bobby Moore lifting the trophy.

But Moore may never have been able to lift the Jules Rimet were it not for the heroics of Pickles, the black and white collie.

The trophy had been stolen four months before the tournament was due to start, but Pickles saved the day when he sniffed it out in the bottom of a garden hedge.

Pickles was subsequently invited to the celebration banquet and awarded the silver medal of the National Canine Defence League, which admittedly now sounds like a political organisation for dogs with right-wing beliefs.

Torquay saved from relegation by dog

In 1987, Torquay United needed a draw on the final day of the season to avoid being relegated from the Football League.

Things looked bleak when they found themselves 2-0 down at half-time, but they were given a glimmer of hope when Jim McNichol pulled a goal back after the break.

With the clock ticking down, McNichol ran towards the touchline and was bitten by a police dog named Bryn. Five minutes off stoppage time were added due to the treatment the full-back received, allowing Paul Dobson to snatch an equaliser in the 95th minute and save Torquay from relegation.

Man’s best friend left Stoke City’s Liam Lawrence in a crumpled mess after the winger tripped over his mutt on the stairs in 2008. But former Barnsley midfielder suffered a worse fate in 1999.

Barnard was in the midst of house training his new puppy and it obviously wasn’t going too well. The former Chelsea utility man failed to notice a steaming yellow puddle in his kitchen and slipped in it, tearing knee ligaments in the process. The injury kept him on the sidelines for five months.