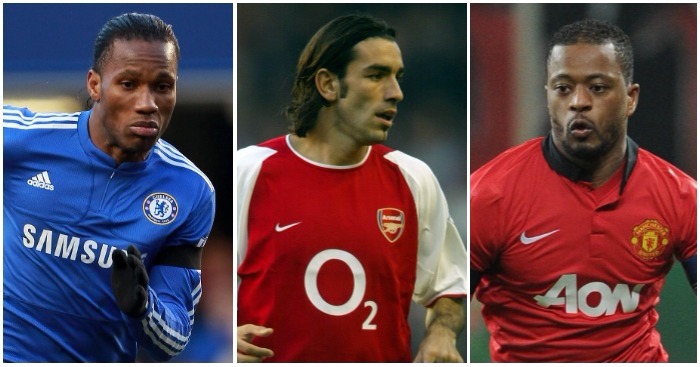 Alexandre Lacazette has proven to be an excellent acquisition for Arsenal since joining from Lyon in 2017 – and he certainly isn’t the first great Premier League signing made directly from Ligue 1.

The French league has undoubtedly got stronger in recent years, making moves across the channel more regular, but it isn’t an entirely new thing. In fact, some of the Premier League’s most celebrated talents arrived directly from the French top division.

Below is a list of eight of the best ever to have moved directly from Ligue 1 to the Premier League since the start of 1992, ruling out the likes of Eric Cantona, who joined the season before the rebrand; Patrick Viera and Thierry Henry, who both arrived from Italy; and Riyad Mahrez, who joined Leicester City when they were in the Championship from Ligue 2 side Le Havre.

Drogba moved to Chelsea for £24million from Olympique Marseille in 2004, which back then was big money, but it proved to be money well spent.

Drogba went on to score 100 league goals for Chelsea, assisting more than 50, while playing a vital role in the Blues winning three Premier League titles, four FA Cups and a Champions League.

The Ivory Coast international’s impressive physical attributes allowed him to bully defenders and easily settle into the English game, and he had a remarkable ability to perform in the big games, scoring nine times in finals for Chelsea.

On an individual level, Drogba won two Golden Boots, was twice named on the PFA Team of the Year, and in 2007 finished fourth in the voting for the Ballon d’Or, the highest of anyone of this list.

The beating heart of any team he seems to play in, and the most recent arrival from Ligue 1 featured on the list.

Following his transfer from Caen, Kanté’s importance in Leicester City’s remarkable 2015-16 Premier League title triumph was indisputable. His incredible energy and ability to intercept and tackle, turning defence into attack, set him apart from any other midfielder in the league.

Remarkably, he then joined Chelsea and played a vital role as they won the Premier League too, becoming the first player in history to win the title in consecutive seasons with different clubs.

Touted by Alex Ferguson to be the best player in the league in April 2016, he won the PFA Player’s Player of the Year for the 2016-17 season.

Arriving as a 27-year-old with a career built in France, Pires’ suitability for the Premier League was initially questioned after his arrival at Arsenal from Marseille in 2000, with suggestions he wasn’t up to the physicality of the English game.

Soon enough, however, Pires was redefining the role of the winger, playing on his ‘weak’ side and cutting in, and showing that the beautiful game was better played with technical ability over physicality.

Pires played an important role in two Premier League titles and two FA Cups, as well as featuring in the PFA Team of the Year three years on the trot.

The first on the list from a non-French speaking country, the Czech international arrived at Chelsea in 2004 from Rennes having plied his trade there for two seasons, winning the Gardien d’Or (Ligue 1 goalkeeper of the season) in his final year.

Cech would stay in England for 15 years, earning a reputation as one of the greatest ‘keepers of his generation: a consistent shot-stopper with good command of his area, as well as possessing intelligence and leadership skills.

Despite a terrible head injury in late 2006, Cech’s career success continued. In fact, just six months after the life-threatening incident he became the first goalkeeper to win a Premier League Player of the Month award since Tim Flowers around six years earlier.

The man who loves Mondays, Patrice Evra arrived at Manchester United in 2006 from Monaco and went on to establish himself as one of the best Premier League left-backs ever.

Comfortable on the ball, fast, strong and versatile, Evra became a staple of Alex Ferguson’s title-winning teams from 2006-07 through to 2012-13, winning five out of a possible seven.

As well as Premier League success, Evra won a Champions League trophy, three League Cups, and five Community Shields while at United. His talent as an individual was also recognised as he featured in three PFA Teams of the Year.

The stylish Belgian winger joined Chelsea from Lille in 2012 after impressing in Ligue 1 for a number of years.

Bar a relatively poor 2015-16 season when Mourinho was sacked and Chelsea finished 10th, Hazard consistently showed he is one of the world’s best, with a number of pros and ex-pros talking him up as a contender to be the ‘next best’ after Lionel Messi and Cristiano Ronaldo.

Skilled with both feet at shooting, passing, and dribbling, Hazard can at times be mesmerising – and terrifying, if he’s playing against your club.

In seven years at Chelsea he won two Premier Leagues, the FA Cup, League Cup, and Europa League, while individually he was named the PFA Players’ Player of the Year in 2015 and featured in the PFA Team of the Year four times.

So good that they named him twice. Okocha arrived at Bolton Wanderers in 2002 from Paris Saint-Germain, where he inspired Ronaldinho.

An enthralling talent with silky skills and excellent finishing to match, Okocha quickly became a fan favourite, saving Bolton from relegation and earning the club’s captaincy.

Leading Bolton to the League Cup final in 2004, their first in nine years, the Nigerian ranks among Bolton’s greatest ever players. He’ll certainly be remembered as one of the most entertaining.

David ‘Le Magnifique’ Ginola joined Newcastle United in 1995 from Paris Saint-Germain. The style and flair he brought with him won him the hearts of many at a time when the Premier League was still very much the First Division with a different name – and more importantly it secures him his place on this list.

His knack for winning questionable fouls was also trendsetting in England’s mid to late nineties, and though not everyone appreciated that side of his game, Ginola’s slick and tricky play earned him a place in the PFA Team of the Year at the end of his first season.

In 1998-99, at the end of his second season with Tottenham, Ginola went one better, being named the PFA Players’ Player of the Year. A significant achievement considering Spurs only finished 11th.

A tribute to David Ginola, great entertainer and incredible bargain

Robert Pires & the final touch of class which made Arsenal invincible