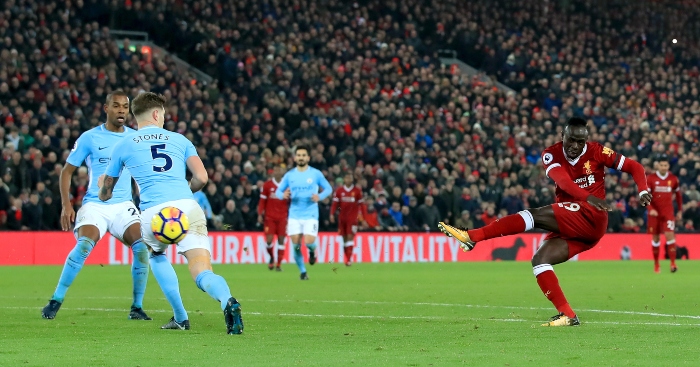 Sadio Mané has shown himself to be a great goalscorer in Liverpool colours – and a lot of his brilliance comes down to the fact that he doesn’t just score one kind of goal.

The Senegal star favours his right foot, as shown by the fact that it has been responsible for 43 of the 58 Reds goals he has scored with his feet since joining the club in 2016.

However, when the situation calls for him to use his nominally weaker left foot, he will not shy away.

Mané didn’t wait long to show what he can do when forced onto his left. During his competitive Liverpool debut at the Emirates Stadium, a panicking Arsenal defence regained its composure just enough to force him inside.

Off-balance, under pressure and at full-pelt, it would have been easy for him to snatch at the shot. Instead, he set the tone for his next few years at Anfield and on the road.

Two men clearly isn’t enough to stop the forward when he’s on song, as Everton found out to their detriment.

Ashley Williams is alert enough to recognise Mané is supposed to be pushed onto his left foot, while Matthew Pennington gets out to close as quickly as possible, yet the Liverpool man is able to make it look like every single element was what he had always planned.

There are many ways in which this should not work. It’s an extremely difficult skill to execute with your stronger foot, let alone the weaker of the two, while Burnley are more likely than most other clubs to get bodies in the box to block the effort.

Sadio Mané has never been the type to go for an easy option, though, and he hits this shot with such venom and certainty that you’re forced to check whether he really is left-footed after all.

Liverpool’s 4-3 win over City was one of those ridiculous games you often seem to get at the end of the congested Christmas and January fixture list, but there was nothing tired about this absolute rocket of a finish.

Thundering in a shot from distance with your weaker foot is one thing; keeping calm under pressure to slot in while making things look incredibly easy is another.

After letting Roma back into their Champions League tie with two late goals at Anfield, Liverpool needed an early response at the Olimpico. Pressure? What pressure?

In title races as tight as the one we witnessed last season, margins are fine, and that goes for squeezing opportunities out of small spaces as well as eking out every possible point.

Against Cardiff, Mané did both, hitting his shot at the only available moment, when there wasn’t even time to bring the ball back inside onto his favoured foot. With this execution, you wonder why he’d have needed to anyway.

The chest control and the pass from Fabinho are what makes this goal, but the finish isn’t too shabby either.

No need to wait when you can hit your spot so effortlessly with a first-time volley.

This one’s just really pleasant to watch, no two ways about it.

By 2019, it felt like Mané had moved past going with his left when the situation called for it, and instead passing up easier right-footed opportunities to score better goals with his weaker foot. That’s what confidence does to a player.