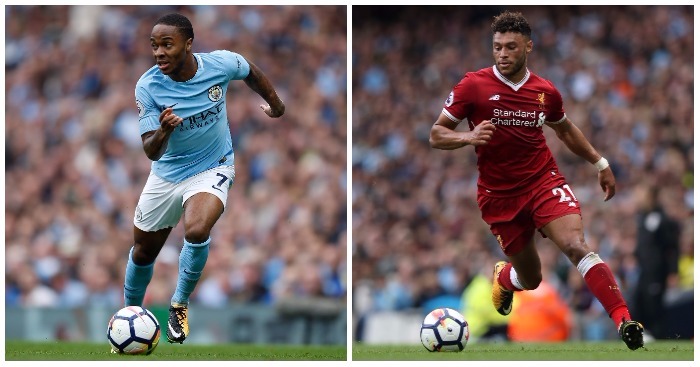 Liverpool were not happy when Raheem Sterling quit for Manchester City, but this summer they landed Alex Oxlade-Chamberlain from Arsenal for similar reasons. How do the players compare?

It’s been three seasons since Sterling’s controversial £49million transfer from Liverpool to Manchester City. Many Reds fans believed he was driven by the £200,000-a-week, five-year package on offer down the East Lancs road. But Sterling argued he made the move to win silverware and raise his game to the clichéd next level.

Just a few weeks ago, Oxlade-Chamberlain made a £35million move to Liverpool from Arsenal for essentially the same reason. He felt he was stagnating at Arsenal so packed up and moved to Anfield – after sidestepping a similar offer from Chelsea – for a fresh start under Jürgen Klopp.

Arsene Wenger has suggested players that leave Arsenal generally see their performances drop rather than improve, and it is sometimes suggested Sterling has underwhelmed at City given his price tag, but has his progress really plateaued since leaving Anfield? And does Oxlade-Chamberlain bring a skillset that is even competitive with that of Sterling?

Using WhoScored.com data from the Premier League seasons of 2011-12 through to 2016-17, here are how the two players compare…

Goal scoring and shot selection: Sterling and Oxlade-Chamberlain have averaged a goal every 371 and 681 minutes respectively over their Premier League careers – or nine and five goals scored over a full season, respectively – if either could complete one without injury.

Sterling has started this season well, however, scoring five goals in his first five league games.

Shots on goal (accuracy): Additionally, Sterling gets a far greater percentage of his shots on target (55.1%) than Oxlade-Chamberlain (38.5%). 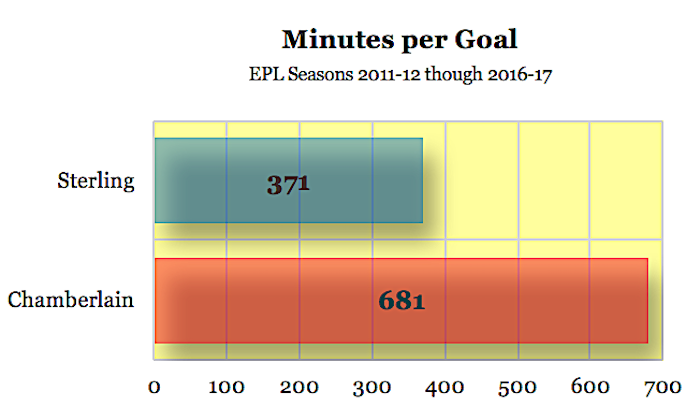 Finishing Efficiency of Shot Selection, xG: The use of the xG measure focuses on scoring based on a specific array of shot selection from pitch location.

Using this measure for the two players, and dividing the pitch in-to only three basic locations of (1) the 6-yard box, (2) penalty area, and (3) beyond the penalty area and the likelihood of scoring from these “grids” using a sample of over 82,000 shots taken from the WhoScored.com database over an eight-season period, Sterling performed 18% above the average English Premier League level of 1.00 goals per expected goal, xG.

Oxlade-Chamberlain shot’s selection showed that his delivered performance was 21% under this average, indicating wasteful finishing. 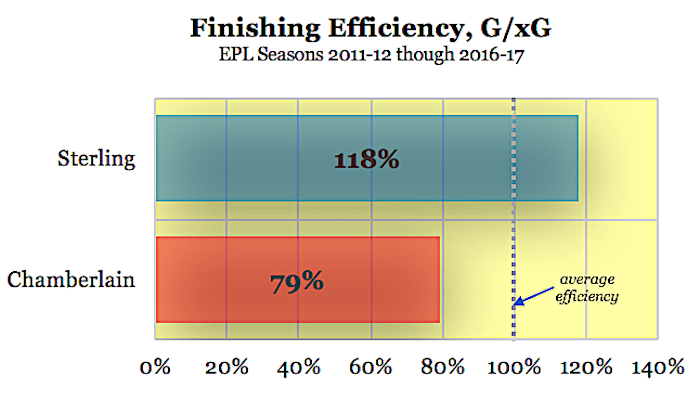 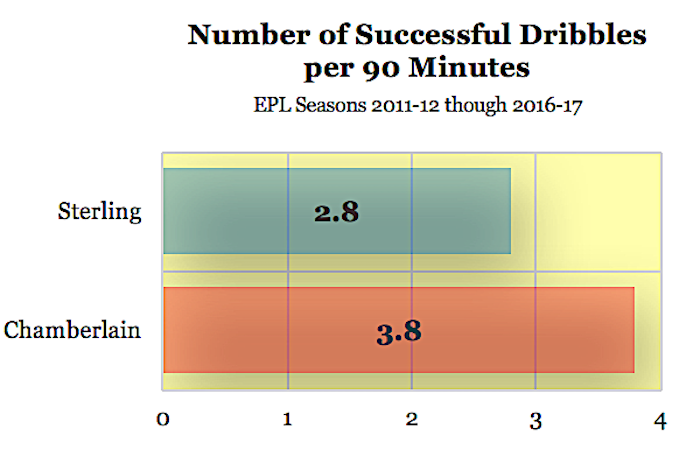 Passing: There is virtually no difference in the passing accuracy between the two players. They both complete almost an identical 82% of their attempted passes.

But Oxlade-Chamberlain completes significantly more passes per 90 minutes (47) than Sterling (30) and attempts a considerably higher percentage of forward passes as well – about 58% to 48% – making his overall pass accuracy more impressive.

However, neither’s numbers are among the best in the Premier League. 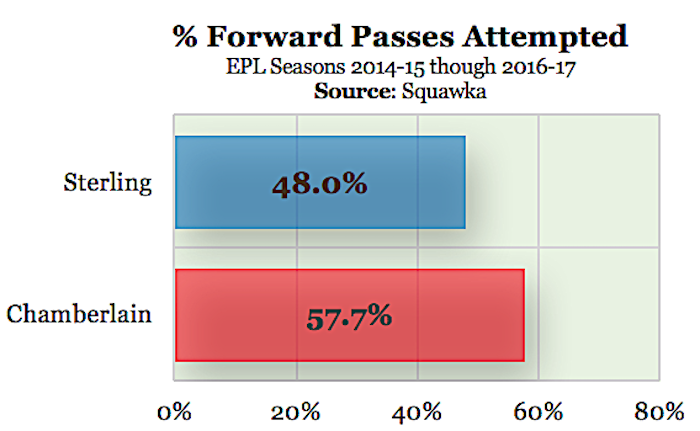 Chances Created: Midfielders are counted on, possibly above all else, to provide scoring opportunities for others. Assists and key passes – especially the final pass – are of paramount importance.

Tracking back is extremely important for midfielders when the play switches from attacking to defending. 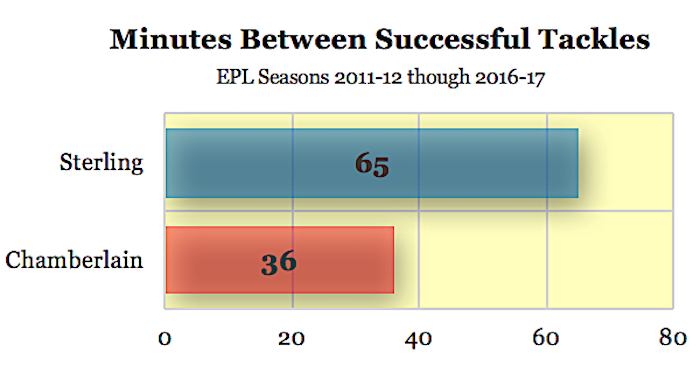 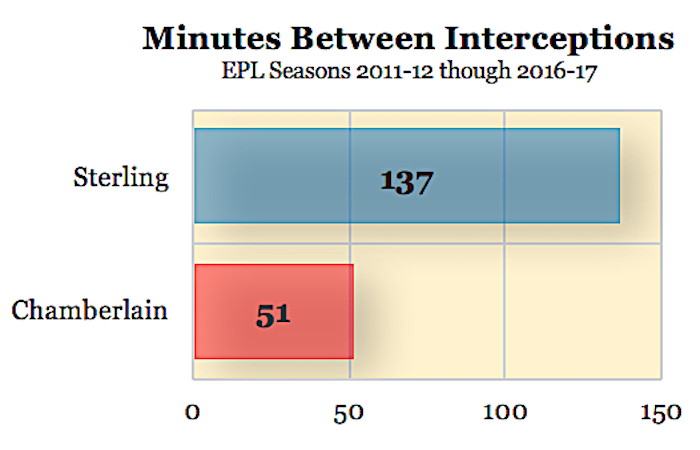 Outstanding performance counts for little when a player rarely appears, either due to injury, suspension, squad selection or a combination of all three.

An examination of the total match minutes played by both players over the last three Premier League seasons reveals a dramatic difference between our two players. Although both have been hampered by a variety of injuries, Sterling has played about 73 percent of the match minutes during this period whereas Oxlade-Chamberlain has only managed to play a paltry 39 percent – an average of only 14-15 matches per season. 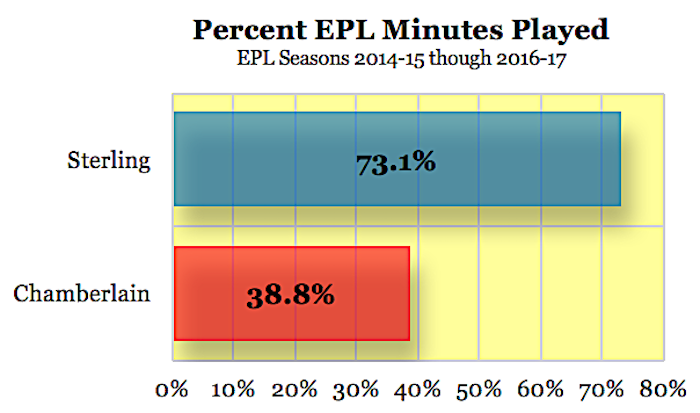 Possibly, a change of clubs and training methods will benefit Oxlade-Chamberlain given the Gunners status as the most injured club in recent Premier League history.

Although not part of the performance comparison, it may be of interest to examine the current, relative market value of the two players given the rapid and dramatic changes in player movement between clubs. Possibly these values reflect how the market views the relative worth of the two players.

There are two readily available sources for obtaining estimates of a player’s current market value: (1) the CIES Football Observatory transfer values and (2) Transfermarkt, whose values are typically the more conservative of the two sources.

Although, as anticipated, the two sources’ valuations of these two players dramatically differ, both sites estimate Sterling’s value at approximately double that of Oxlade-Chamberlain. 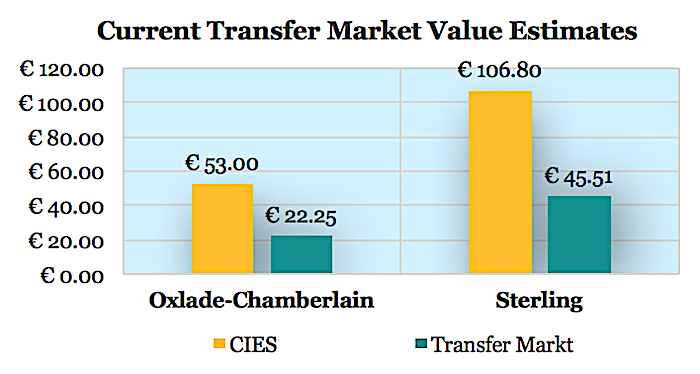 Based on the selected array of metrics used to compare the players, neither Oxlade-Chamberlain nor Sterling clearly overshadows the other. But each has advantages over the other. Here are the key findings:

1. Although neither player can be considered to be a proven goalscorer, Sterling is the more reliable of the two. His shots on target percentage and his finishing efficiency based on shot selection are far superior to Oxlade-Chamberlain, who is extremely deficient in this area of performance.

2. Oxlade-Chamberlain is one of the most successful and efficient dribblers in the Premier League, though Sterling’s numbers are also well above average.

3. Both players create chances at almost the same rate. There is no significant difference, and neither is an exceptional provider with numbers of about two per game. More should be expected from this position of play.

5. Oxlade-Chamberlain is more active defensively, completing more tackles and interceptions than Sterling, who is almost certain to be under pressure from Pep Guardiola to improve in this regard.