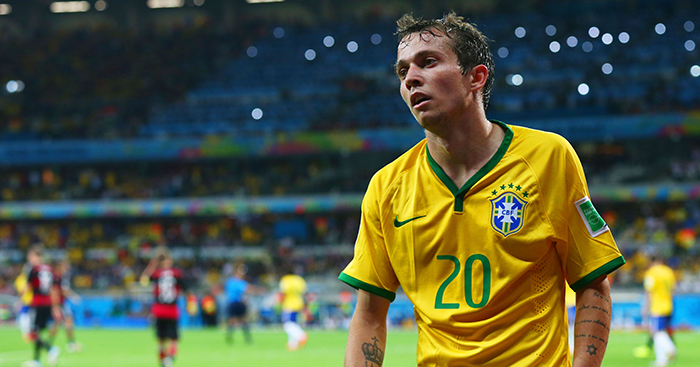 When Huddersfield Town handed Erik Durm his Premier League debut as a late substitute against Everton on September 1, you could be forgiven for forgetting they were bringing on a World Cup winner.

Durm lifted the World Cup as part of the Germany squad in Brazil in 2014, albeit he didn’t actually play a single second in the tournament, but now he is set to spend his season fighting relegation.

This lot, all current Premier League players, actually got some minutes at a World Cup – but you may well have forgotten all about them.

Still, after Swansea were relegated from the Premier League, Fernandez’s form was good enough to prompt a £6million move to Newcastle United on deadline day, reuniting him with his former Napoli coach Rafael Benitez.

His signing didn’t exactly send the Geordie fans into raptures, but he is quickly winning them over with his performances. We shouldn’t be surprised: Fernandez has 32 caps for Argentina and was part of the side which reached the 2014 World Cup Final, where they were eventually beaten by Erik Durm’s Germany.

He started all three group games and in their 1-0 extra-time win over Switzerland in the last 16 but was replaced by Martin Demichelis for the rest of the tournament and hasn’t played for his country since.

It must feel like a lifetime ago, but Manchester United’s third-choice right-back has actually played at a World Cup.

Darmian managed just 17 appearances in all competitions for United last season and was linked with a return back to Italy, but that never materialised, leaving him kicking his heels at Old Trafford.

He actually started United’s first game of the season but hasn’t played a single minute in any competition since and has only even made the matchday squad twice more.

Back in 2014, then of Torino, Darmian’s stock was rather higher as he started all three of Italy’s games at the World Cup. He was even named the national team’s player of the year, but the Azzurri crashed out at the group stage and failed to even make the finals four years later.

Even if Darmian does play at another World Cup, this will surely remain his career highlight..

In 2014, Brazil suffered the most embarrassing and humiliating defeat in their history, losing 7-1 to Germany at the World Cup on home soil. Bernard played the full 90 minutes.

He has never appeared for the national team since that night in Belo Horizonte, but still only 26, the 5ft 4in winger still has time to reach those heights again – metaphorically, of course – having joined Everton over the summer.

Regularly linked with a move to the Premier League in the past, Bernard has so far managed just 71 minutes for the Toffees since his move from Shakhtar Donetsk, but coming off 10 goals in 29 games for the Ukrainian club last season, he is expected to play a much bigger role once fully settled.

It might have passed you by that Southampton signed Bednarek in the summer of 2017. Even if it didn’t, you’d almost certainly forgotten about him by the time he made his Premier League debut in April 2018.

He won his first cap for Poland in the meantime, however, and after scoring on his debut against Chelsea and then playing in four of the last five games of the season, he made it on to the plane for the World Cup.

Continuing his rapid rise, he came off the bench to play 45 minutes in Poland’s opening game against Senegal before playing the full 90 minutes against Colombia and Japan, scoring the only goal of the game against the latter.

With World Cup-winning goalkeeper Hugo Lloris ahead of him in the pecking order, games are hard to come by for Vorm at Tottenham.

He didn’t do his chances much good in his recent stint in the team, somehow managing to pass a goal kick directly out for a corner, but having made only 46 appearances in more than four years at Spurs, he’s clearly content to be a back-up.

And it has been a similar story for the Dutchman at international level, with only 15 appearances to his name and none since he moved to White Hart Lane in 2014.

He has gone to two World Cups as a reserve goalkeeper for the Netherlands, but he did actually play at the 2014 tournament – well, kind of.

With the Dutch 3-0 up and closing out the final minute of injury time against Brazil in their third-place play-off, Vorm was brought on as a substitute, meaning all 23 squad members had been used in the tournament.

He was denied the opportunity to sit on the bench at another World Cup when the Netherlands failed to make it to Russia in 2018.

Anyways, here's Michel Vorm's goal kick that went out for a corner. pic.twitter.com/2wRh9WveE3

In 2010, coming off the back of one goal in 18 appearances in the Championship for West Brom, Wood was selected as the youngest member of the New Zealand squad for the World Cup in South Africa.

He appeared in all three of the All Whites’ games from the bench as they went out at the group stage while finishing the tournament as the only unbeaten side thanks to three draws.

Since then, Wood has gone on to play for Brighton, Birmingham, Bristol City, Millwall, Leicester, Ipswich, Leeds and now Burnley, while for New Zealand he now has an impressive 24 goals in 56 games.

New Zealand missed out on the 2014 and 2018 World Cups, losing in play-offs to Mexico and Peru, but with the tournament expanding to 48 teams in 2026, Wood, still only 26, may yet get a chance to make more of an impression on the biggest stage.

Defour was once an incredibly promising youngster, becoming a Genk regular aged just 17 and representing Belgium at under 15, 16, 17 and 18 level before being called up for the full squad as an 18-year-old in 2006.

Belgium failed to make the World Cup that year or in 2010, and by the time the 2014 tournament came around, Defour was old news with the likes of Kevin De Bruyne and Mousa Dembele now established in midfield.

With the Red Devils already qualified, Defour was handed a start in the final group game against South Korea, but he was shown a straight red card after just 44 minutes for a reckless tackle on Kim Shin-wook in what proved to be his only involvement in the tournament.

He joined Burnley in 2016 but made only four more appearances for Belgium before announcing his retirement from international football ahead of the 2018 World Cup after injury had ruled him out of contention for selection.

Another Belgian, Origi has suffered a gradual fall from grace since 2014, when, fresh from a breakthrough season for Lille in France, he became the youngest Belgium goalscorer in World Cup history, aged 19 years, two months and four days, stepping off the bench to score a late winner in their second group game against Russia.

Origi completed a £10million transfer to Liverpool late that summer and was named the Belgian Young Talent of the Year for 2014, but he was loaned back to Lille for the 2014-15 season and named in L’Equipe’s worst team of the season after suffering a 20-game goal drought between October and March.

He managed a respectable 21 goals in 76 appearances for Liverpool across the next two seasons, but he scored only six goals in 34 games on loan at Wolfsburg last season, failed to make Belgium’s squad for the 2018 World Cup and is yet to even make the bench for a Liverpool game this campaign.