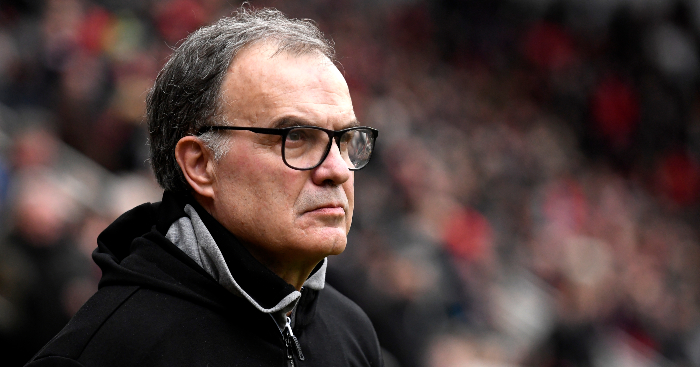 When Marcelo Bielsa came to Leeds last summer, he arrived with a stellar reputation.

Pep Guardiola famously called him “the best coach in the world”, and his influence on Mauricio Pochettino is well-established by now, with his reputation in part down to developing players.

The Argentine has lived up to the hype in West Yorkshire, leading Leeds to the top of the Championship and giving 10 players under the age of 21 a senior debut in the process.

As well as Pochettino, Eduardo Berizzo and Gerardo ‘Tata’ Martino played for his seminal, title-winning Newell’s Old Boys side of the earl 90s. All three have forged successful managerial careers that have in part been based on replicating his style.

Since then, he’s helped develop talent wherever he’s been, and laid the groundwork for Chile’s double Copa America winning greatest generation.

After leaving the national team in 2011, Bielsa has worked in club football in Europe, taking charge of Athletic Bilbao and Marseille before brief spells at Lazio and Lille. Here are eight current top-level talents that he’s helped develop in recent years.

Herrera had already forged a decent reputation in Spain by the time he worked with Bielsa, helping boyhood club Real Zaragoza get promoted and establishing them as a top-flight team.

But it was at Athletic Club that he truly became a talent to catch the eye of Europe’s biggest clubs. He was particularly exceptional as Bielsa’s Athletic outclassed Alex Ferguson’s Manchester United in the 2011-12 Europa League, pressing heavily from the front as an all-action playmaker.

“Bielsa is also offensive but in a different way. Bielsa is maybe the most brilliant mind – the way he sees football, the way he studies the opponent,” Herrera told The Telegraph in 2016.

“It doesn’t matter if it’s Barcelona or Getafe. He is the most different, the most original.

“I think England would be the perfect country for him, also, the perfect football because he doesn’t like players to complain.”

Another player that was already established as a dependable LaLiga presence when Bielsa joined Athletic in 2011, it was only after working under Bielsa that Javi Martinez upped his game to the top level, moving to Bayern Munich for a record Bundesliga fee of €40million a season later.

After being adapted to a centre-back, Martinez was a key player as Athletic reached the Copa del Rey and Europa League finals in 2012. He delivered instantly at Bayern, winning the treble under Jupp Heynckes in his first season there.

“There are days when he doesn’t leave the training ground until the small hours,” said Martinez. “It is insane.”

El Loco’s second and final season with Athletic was not a successful or memorable one, finishing a disappointing 12th in LaLiga and failing to make an impact in the cups.

But at least that season had the emergence of Aymeric Laporte, who was given his debut at the age of 18. After being given the perfect introduction, Laporte established himself as one of the world’s most promising ball-playing centre-halves, something that earned him a £57million transfer to Man City in 2018.

“Without him, I might not be where I am today,” Laporte told The Times. “It was Bielsa who gave me my first steps in the [Spanish] top flight, and so I owe him a lot. I’m very grateful to him and very aware of exactly what he did for me.

After coming through the famous Le Havre academy, Mendy moved to Marseille in 2013 and was given his top-flight debut shortly after by Bielsa, spending three years there before winning titles with Monaco and Man City.

“He made me devour videos like never before,” Mendy said. “To begin with, he put me in front of the videos and I’d fall asleep. But he was happy! I was shocked.

Spending plenty of time on the sidelines at City, Mendy has since become the figurative president of the Marcelo Bielsa fan club, and can often be found tweeting about Leeds’ Championship campaign.

The striker, on loan at Crystal Palace from Chelsea, has put in some sensational performances for Belgium and Borussia Dortmund in recent years. But it was under Bielsa at Marseille that he first caught the eye.

Like in Bilbao, Bielsa’s second season at the Stade Velodrome failed to yield the same results as the first. Still, it featured Batshuayi settling in, scoring nine goals despite often being used as a substitute.

The Belgian doesn’t quite have the same affection for his former manager as the likes of Mendy and Laporte did, but he appreciates that tough love made him a better player.

“I was seriously impatient. The problem was my preseason. As it had gone very well, it made me even more excited! I was top scorer of the club during the preseason,” he said, looking back on his time at Marseille.

“In my mind, I was on the field for the first game. But I was wrong.

“I knew I was going to have a face to face meeting. At that time, I was still too small in my head to understand some things. Then I learned, I understood too, with Bielsa who was a very hard coach. In any case, I do not regret anything, nothing, nothing.”

The Gabonese central midfielder didn’t quite live up to his early promise after joining Juventus on a €9.5m deal, but he showed enough promise working at Marseille to be considered worth a shot.

His breakthrough season came as Marseille finished 4th in 2014-15. Having since joined Southampton for a club record £15.4m, he’s raved about his time working under Bielsa.

“We found another OM, more spectacular. With the coach, I learned a lot. It’s really very interesting to work under his command,” he said. “When he left, it was a shock to me and that’s what made me want to go.”

The mercurial star had long been a proven talent by the time he worked with Bielsa, having spent time at Nantes, Saint-Etienne and Lille, where he was named in the Ligue 1 team of the season in 2012-13.

However, he personally credits Bielsa with taking him up a level to become the player that dazzled Premier League watchers with West Ham and starred for France during Euro 2016.

In the 2014-15 season, Payet played more successful through balls than anyone but Messi in Europe as he established himself as a supremely gifted number 10.

“Bielsa was the first to recognise that Dimitri is a playmaker and not a winger. Dimitri is probably the best player in the world, together with Andrés Iniesta, with his back to the goal,” said Bielsa’s former assistant Jan wan Winckel.

“He is so technically gifted and agile that it is almost impossible to get the ball from him. It is no coincidence that Dimi scored against Romania (at the Euro 2016 finals in France) when he was playing in a central role.”

To say Bielsa’s time at Lille didn’t go to plan would be an understatement. He departed the club before Christmas, leaving the club battling relegation and engaging them in a bitter legal dispute.

However, after a long slog to survive the drop last year, they’re now thriving and some of the changes he demanded in the summer of 2017 are starting to pay dividends, not least significantly bringing down the average age of the squad.

One of the signings that transfer window was 22-year-old Ivorian Nicolas Pepe, who has since become one of the most in-demand players in Europe. The right-sided attacker has 16 league goals and eight assists as Lille sit second in the table.