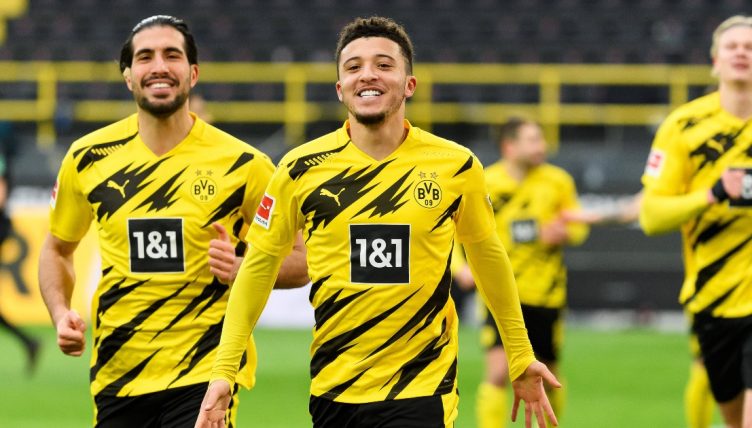 Borussia Dortmund‘s Jadon Sancho has consistently been a standout player in European football for so long, it’s easy to forget he’s still only 20 years old.

It looks to be yet another summer of Sancho’s name being a constant presence in the transfer gossip columns, but it should be no surprise that the likes of Manchester United and Chelsea are so interested given the records he keeps breaking in Germany.

Here are nine of the most impressive stats, records and milestones from the England international’s fledgling career to date.

– Not only is he the youngest, but no player has reached that milestone faster than Sancho, who achieved the feat in just 99 appearances in the German top flight.

– With his peach of an effort against Club Brugge, Sancho became the first English player to score direct from a free-kick for an overseas club in the Champions League since David Beckham did so for Real Madrid against Rosenborg back in 2005.

– Dortmund are yet to lose a Bundesliga match that Sancho has scored in. He’s scored 36 goals in 31 different games (25 wins, six draws).

– Sancho finished the Bundesliga 2019-20 Bundesliga with 17 assists and 16 goals. In doing so, he became the first English player to register more than 15 goals and 15 assists in a major European league since Matt Le Tissier for Southampton back in the 1994-95 Premier League season.

– He is now up to 36 goals, but back when he was still breaking through, he became the youngest player in Bundesliga history to hit 15, doing so in his 48th appearance in the competition back in August 2019.

– In January, he also became the fastest to hit the 32 mark. If he stays in Germany long enough, he’s well on track to hit break the record for 50 goals too, currently held by Schalke’s Klaus Fischer (21 years, 292 days) all the way back in 1971. 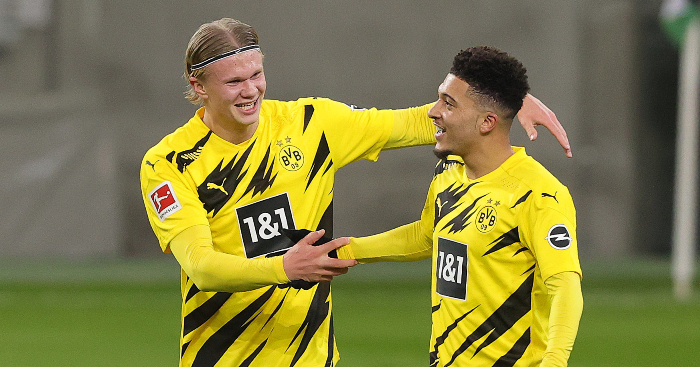 READ: Sancho’s brilliance shows there’s more than one star in this Dortmund team

– Sancho is helping others break records, too. Dortmund team-mate Erling Haaland has reached 30 Bundesliga goals and 15 Champions League goals quicker than any player in history. This season, six of Sancho’s nine Bundesliga assists and two of his three assists in the Champions League have been for the Norwegian.

– Since the start of last season, Sancho has registered 25 Bundesliga assists. The only players in Europe’s top five leagues to have registered more in that time are Thomas Muller (32) and Kevin De Bruyne (31).