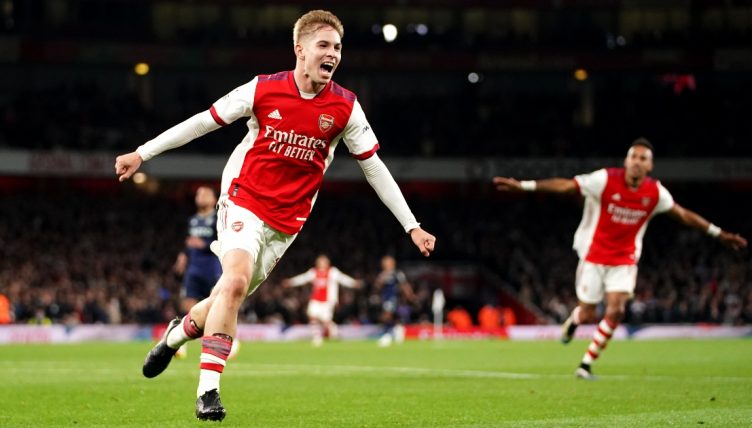 Emile Smith Rowe received rave reviews for his individual display as Arsenal defeated Aston Villa 3-1 on Friday night, and it’s not difficult to see why.

Scoring one and assisting another, Smith Rowe was named Arsenal’s man of the match as they produced one of their best displays of the season.

The youngster seemed well suited to playing on the left flank as Mikel Arteta gave a hat-tip to former boss Arsene Wenger on his 72nd birthday, going decidedly old school with a 4-4-2 that was reminiscent of Arsenal in the 1990s.

“The other night he wasn’t 100 per cent fit but he stepped forward and he wanted to play with a difficult injury that he had,” Arteta said after his star showing, praising the Hale End academy graduate for making changes to his lifestyle to take his game up another level.

“There is no complaining, he is just looking forwards, he is really determined, he has changed the way he is living as well a little bit and some of the habits that he had and he’s been superb.”

“It’s his fourth Premier League goal and if he adds that to his game we have got a star. He’s as good as anyone in the league when he’s running with the ball,” Carragher said.

“He can use both feet, he never looks like he’s out of control, and the pace at which he can actually run with the ball at his feet. We have so many special players in this country, especially in attacking areas. We have an abundance of talent and Smith Rowe is one of them.”

Here are some statistics to help illustrate how good Smith Rowe was in the victory over Aston Villa:

– Smith Rowe registered 68 touches of the ball. The only player on the pitch to notch more was Gunners right-back Takehiro Tomiyasu (with just one more).

– The 21-year-old completed 46 accurate passes, the most of any player on the pitch. For reference, Bukayo Saka who completed 90 minutes on the opposite flank, only registered just over half as many passes (24).

– His goal came from a value of just 0.12xG (via Infogol) – albeit a little fortituous.

All in the space of just 13 seconds 🤯

– In total, Smith Rowe carried the ball 294 yards towards Aston Villa’s goal. That’s the furthest distance of any player on the pitch (via FBref).

– He completed all three of the dribbles he attempted. That accounted for 75% of Arsenal’s total dribbles (four) on the night.

– Of Arsenal’s seven interceptions on the night, Smith Rowe was responsible for two (joint-most with Gabriel Magalhaes).

Boyhood Arsenal fan. Hale End graduate. Wearing the No 10 shirt. Scoring in front of his people.

THIS is what it means ❤️

– He registered seven shot-creating actions, the most of any player on the pitch.