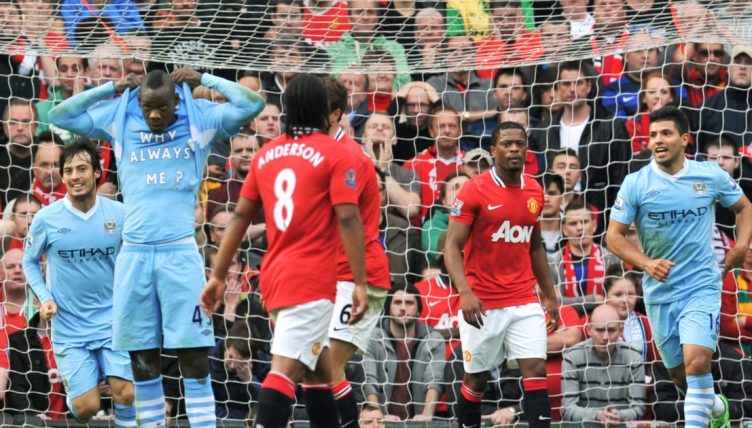 Clashes between Manchester United and Manchester City rarely disappoint – and the derby has provided plenty of incredible moments over the years.

The dynamic of the rivalry has changed immeasurably in recent years, with City now just as established among the world’s elite as their old foes from Old Trafford.

We’ve looked back at some of the greatest moments from fixtures between the two teams in the Premier League era.

Before City became the super-rich behemoths of today, they were the plucky underdogs whose recent history involved yo-yoing between the divisions.

In 2002, City were newly-promoted to the Premier League and welcomed United for what would be the final derby at Maine Road before their move to what is now known as the Etihad Stadium.

United were without suspended captain Roy Keane, and stand-in skipper Gary Neville had a day to forget as the visitors’ back four was terrorised by Shaun Goater and Nicolas Anelka as City triumphed 3-1.

Recalling his worst moments in a Red Devils shirt, Neville told fanzine United We Stand: “Vasco Da Gama was bad. That and the City one live long in the memory.”

This game. This bloody game.

It seems strange to think back to this New-Moneyed City still being managed by Mark Hughes.

The new kids on the block went to send a message to the established school bullies and fought back to score three equalisers, the final of which came from Craig Bellamy in the 90th minute.

But there was still time for United to reassert their authority. While all those around him lost their heads in the fever of the fixture, Ryan Giggs kept his head to thread a delicate pass through to Michael Owen to poke home a 96th-minute winner.

Cue Gary Neville losing his sh*t on the sideline – before hilariously pretending to warm up while celebrating – and a wonderfully giddy Fergie. 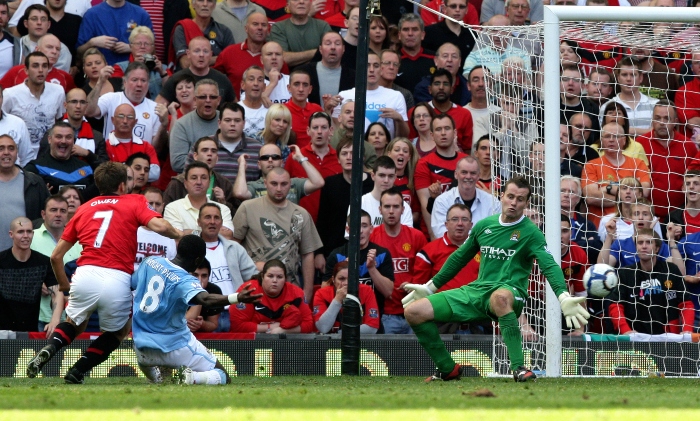 The day the noisy neighbours proved they had the bite to match their bark.

Yaya Toure’s winner at Wembley fired City into their first FA Cup final for 30 years, which they went on to win by beating Stoke City.

And in keeping with the tensions between the two sides, Paul Scholes was sent off late on for a wild tackle on Pablo Zabaleta, while Mario Balotelli prompted the fury of Rio Ferdinand and Anderson after celebrating in front of the United fans at full-time.

Gary Neville has never kissed anyone before or since with such intense love. Just look at the way he gently caresses Paul Scholes’ face while sweat glistens off his forehead, that wiry moustache tickling his mate’s top lip.

Was it really worth a 93rd-minute winner at your nearest rivals? “A kiss on the lips from Nev is worth it any time after a winner against City!” Scholes told the Manchester Evening News in 2013.

John O’Shea has a different outlook: “Poor Scholesy couldn’t do much, could he? He was the poor victim who tried to push him off, but it was too late.

“That’s Gaz for you. I don’t think it was for his benefit, mind you. I think it was to make the City fans feel that little bit angrier!”

ON THIS DAY: In 2010, Gary Neville kissed Paul Scholes after his 93rd-minute winner in the Manchester derby.

Just remember Mario, the main man, having the police and fire services visit his house at 1am on the day before the game after setting his own house on fire by letting off fireworks in his bedroom.

And then remember him opening the scoring with a languid side-foot finish from the edge of the area before lifting up his shirt to reveal those three words: “Why always me?”

It’s always him because this is Super Mario’s world. We’re all just living in it.

After scoring the first goal for #MCFC in a 6-1 win over #MUFC at Old Trafford in 2011, Mario Balotelli did this…

Was this celebration Balotelli’s most memorable? pic.twitter.com/WVfMYp9iCz

People that try to denigrate this goal because he shinned it are idiots.

It’s a f*cking overhead kick arrowed into the top corner to win a Manchester derby. What more do you people want?

We should never have had that “Aguerooooooo” moment. If anything, we’ve got Steven Pienaar to thank for the most dramatic moment in the history of the Premier League.

The Everton midfielder bagged a late equaliser as United conceded twice in three minutes to blow a 4-2 lead and put the title in City’s hands with three games remaining.

First, City needed to beat the Red Devils at the Etihad the following week to go top of the league on goal difference, and fittingly it was their captain, Vincent Kompany, who came up with the winner. 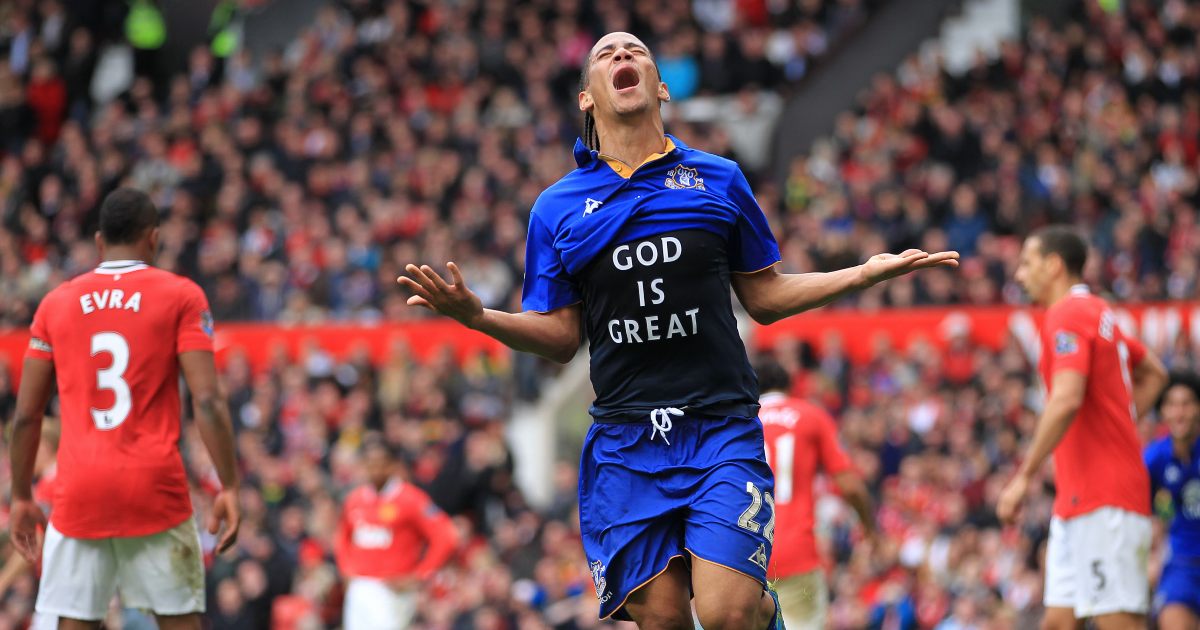 Still smarting from that Aguero moment, Fergie made it his last challenge as United boss to wrestle the title back to the red half of Manchester, and Robin van Persie would prove to have a decisive say in the trophy’s destination.

The striker was coming off the back of a 37-goal season for Arsenal and was presented with the choice of City or United. Despite the offer of a £300,000-a-week contract from the former, the Dutchman opted for Old Trafford.

And City were left to rue his decision in the first derby of the season as their comeback from 2-0 down was spoiled by Van Persie’s last-gasp free-kick.

Rio Ferdinand was cut by an object thrown from the stands in the ensuing celebrations, while Joe Hart had to remonstrate with one of his own supporters who had invaded the pitch.

Ultimately, Van Persie’s heroics are what remains best remembered, as he fired United to the title with 26 goals.

Who can forget @Persie_Official's injury-time winner v Man City in 2012? 💥

Well, you can relive the whole match in 90 seconds right here! 🔽 pic.twitter.com/MyGZ0qkBVG