12 of the most memorable off-field clashes: Milk, pizza, squirted water… 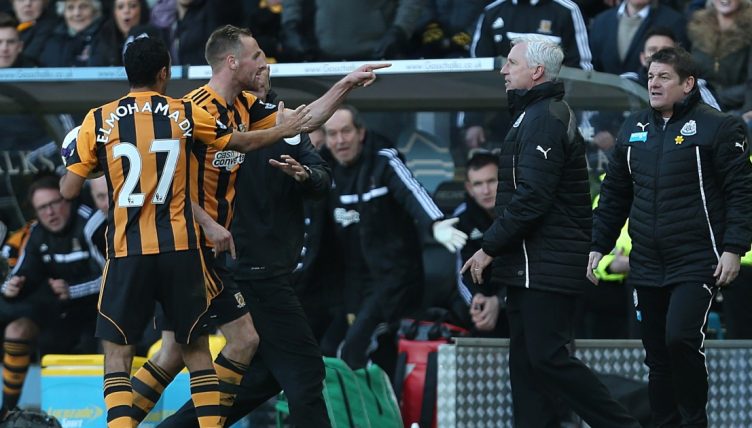 Manchester United, Manchester City, Arsenal, Chelsea and Tottenham are among the clubs to have all been involved in off-field bust-ups over the years – and we’ve loved every single one of them.

We’ve previously celebrated the mass brawl on the pitch, but there have also been examples of bad blood spilling over after the games, on the touchlines and even in the tunnel before kick-off. Here are some of the most memorable off-field clashes.

It speaks volumes about Ianni’s sh*thousery – celebrating Ross Barkley’s late equaliser in Chelsea’s 2-2 draw by taunting Mourinho (not once, but twice) – that it actually made us sympathise with the then Manchester United boss, who tried to chase the Italian down the Stamford Bridge tunnel.

Still, it did provide some superb photos. 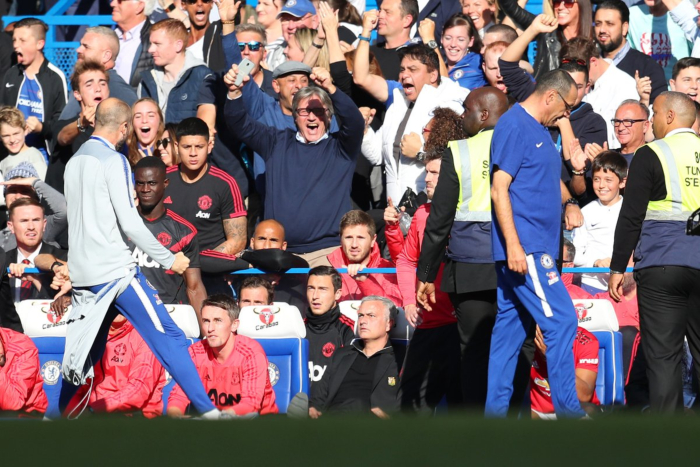 In December 2017, Mikel Arteta was left with a cut head after he was hit by a plastic drinks bottle during a fracas after Manchester City’s 2-1 win at Old Trafford.

Rather more amusingly, someone threw a milk carton at United boss Jose Mourinho which apparently ‘splattered’ a member of his coaching staff.

All because the Portuguese took offence to City’s celebrations at the end of the game.

Thirteen years earlier, Manchester United were involved again, with their game against Arsenal given was the nickname ‘The Battle of the Buffet’ as a match filled with unpunished crunching tackles was followed by a brawl in the tunnel.

In the post-match fracas, an Arsenal player launched a slice of pizza at Sir Alex Ferguson – finally confirmed as Cesc Fabregas when he appeared on A League of Their Own.

As Ashley Cole so eloquently described in his autobiography: “This slice of pizza came flying over my head and hit Fergie straight in the mush.

“All mouths gawped to see this pizza slip off this famous, puce face and roll down his nice black suit.”

Perhaps the most famous of the lot – and again involving Manchester United and Arsenal, in 2005, a year after pizzagate.

This time the game hadn’t even begun when the two captains squared up.

Thankfully for us, cameras caught most of the incident, with Keane saying to Vieira: “See you out there”. Ahh, we miss these two.

In a 0-0 draw with Everton back in 2013, Arsenal players were getting frustrated and angered by the visitors’ tough-tackling style.

It was a good shot, to be fair.

At the end of an incredibly bad-tempered match which handed Leicester City the title, Chelsea and Tottenham players clashed en masse, with Fabregas involved yet again.

This particular scuffle sees Danny Rose come flying in and launch Chelsea boss Guus Hiddink down the steps into the sunk dugouts at Stamford Bridge.

“It’s a penalty, p*ss off” is absolutely wonderful.

“It’s a penalty, f*ck off” is perhaps an unnecessary follow-up.

In what has to be one of the most bizarre – and definitely the least defensible – clashes on the list, Mourinho walks through a brawl during El Clasico in 2011 just to gouge Barcelona boss Tito Vilanova’s eye.

Fabregas’ name crops up once more, as the coming together started when he was taken down by a wild Marcelo challenge.

Jordan somehow ended up riling Gattuso in the famous 1-0 win for Spurs at San Siro in 2011, but the Italian surely picked on the wrong man.

Jordan was as tough as they come as a player and certainly isn’t a stranger to a touchline scuffle, having confronted Chelsea coach Ray Wilkins and Blackburn manager Paul Ince within the space of a week in 2008.

Players, coaches and even a policeman who looks like he really can’t be arsed with this sh*t. Up the fitba.

A routine 4-1 victory over Palermo in February 2017 should have been relatively straightforward for Juventus.

Yet Allegri still found reason to argue with Bonucci as cameras overheard the manager shouting: “Shut up, d*ckhead! F*ck off!” Bonucci replied by telling Allegri to “go to hell”.

“And Pardew lays the butt on him!”

The sheer audacity of this makes this brilliant. God knows why Alan Pardew chose to get involved, but he did.

And was duly handed a Premier League record seven-game ban for his actions.

"If he'd have dropped me I'd have never lived it down!" 🤣

"The police rang asking if I wanted to press charges. I thought it was a wind up!"@DavidMeyler lifts the lid on the fallout of THAT incident with Alan Pardew… pic.twitter.com/LFFnjFAsRK