Eight players who could leave Barcelona before the transfer deadline 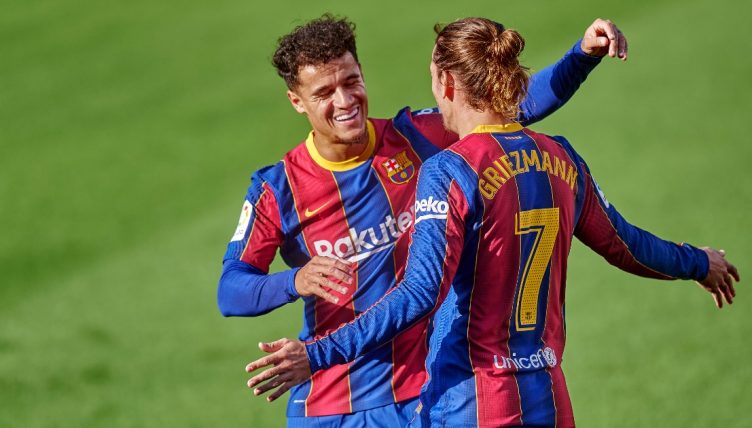 It’s common knowledge that Barcelona are in a financial crisis.

Their out-of-control finances meant Lionel Messi could not be retained and the club are desperate to reduce their wage bill. While players such as Gerard Pique and Jordi Alba have signed new contracts with reduced salaries, Barca still need to shift some players.

With days before the transfer window shuts, we’ve identified eight men who could leave the Camp Nou before the deadline.

It’s safe to say that Barcelona’s big-money gamble for Dembele hasn’t paid off, after they reinvested a large wedge of the Neymar cash to sign the Borussia Dortmund winger when he was one of the most highly-rated youngsters in Europe, back in 2017.

There have been some bright flashes over the years, and 30 goals and 21 assists in 118 appearances is not a terrible return, but it’s not quite what the club would have envisaged.

Persistent injuries have resulted in the France international failing to realise his potential whilst at the Camp Nou, and reports suggest he’s one of the high earners they’re now desperate to get off their wage bill. But with just a year left on his contract, they’d be lucky to recoup a fraction of the €147million they originally signed him for.

Dembele Mk.II, Coutinho walked through the door six months later for another sizeable fee. The Neymar windfall gone, just like that.

The issue is that Coutinho was neither a suitable replacement for his compatriot Neymar, nor Andres Iniesta in midfield, and has always looked an awkward fit at the Camp Nou.

He remains contracted for another two years, but it’s been clear that the Catalan club have been aiming to offload him since 2019, when Bayern picked up his exorbitant wages on a season-long loan. He rubbed salt into their wound by scoring two late goals in an 8-2 thrashing in the Champions League before returning and doing very little of note under Ronald Koeman.

The tabloids continue to talk up the prospect of a Liverpool reunion, but the idea of them or anyone else paying a large transfer fee looks unlikely. But there may well be the opportunity for another loan.

A theme is emerging here. Barcelona’s third all-time most expensive signing is also said to be surplus to requirements as the club look to step back from the brink of financial crisis.

A return to Atletico Madrid was mooted earlier in the summer, but nothing materialised. But you imagine as Barcelona’s desperation grows in the final days of the window, some cheeky lowball bids may come their way.

Yet another technically superb midfielder to emerge from La Masia, Puig is one of the most highly-rated prospects to emerge in years – but Koeman doesn’t seem a fan, and handed him just two starts in La Liga last term.

Some reports suggest that the 22-year-old is keen to stay and either prove himself to the Dutch coach or outlast him. But Catalan journalist Gerard Romero has reported that the Barcelona manager has advised Puig to move on and find a new home.

And now Barca have signed Eric Garcia, the World Cup winner is arguably the fifth-choice centre-back at the Camp Nou.

It’s been a sad fall from grace for Umtiti, who the club are attempting to persuade to cancel his contract and become a free agent.

But, with reports suggesting Barca are struggling to find a buyer, perhaps the France international will stay after all.

It was always a strange signing for Barca to make and Pjanic looks set to leave the club in the near future.

The 31-year-old didn’t set the world alight after joining from Juventus and Koeman is desperate to get his wages off the books. Pjanic has not been part of the first-team squad for either of Barcelona’s opening two games of the season.

Pjanic’s agents held talks with Juve over a return, but are yet to reach an agreement over a move this summer. During this impasse, Napoli have registered an interest in the midfielder according to Mundo Deportivo.

When asked about Pjanic and Umtiti’s future, Koeman told reporters: “There are players like them who have a very difficult time having minutes, but the final decision is always on the part of the players.

“They have a complicated position, yes.”

Having moved to Spain to play with compatriot Lionel Messi, Aguero must have been cursing his luck when the legendary attacker joined PSG earlier this month.

Manchester City’s record goalscorer is not currently registered with the club, with injury ruling him out until October. Despite this, Aguero is reportedly so disappointed about Messi’s departure that he’s eyeing up a mid-season move to the MLS.

That’s according to Phil Kitromilides, who hinted that sources close to Barcelona had told him the news on Monday morning’s Spanish Football Podcast, which he hosts with Guardian journalist Sid Lowe.

Moriba established himself in Barca’s first-team squad last season and you’d imagine Koeman would loathe seeing such a promising youngster leave the club.

But the 18-year-old has rejected Barcelona’s offer of a new contract and negotiations stalled with the two parties failing to find common ground on the players’ wages.

With no resolution in sight, Barcelona are preparing to listen to offers for the Guinea-born Spain youth international.

Reports have suggested that the 18-year-old has caught the attention of Premier League side Tottenham. Chelsea, Manchester City, RB Leipzig and Real Madrid have also been heavily linked with Moriba.