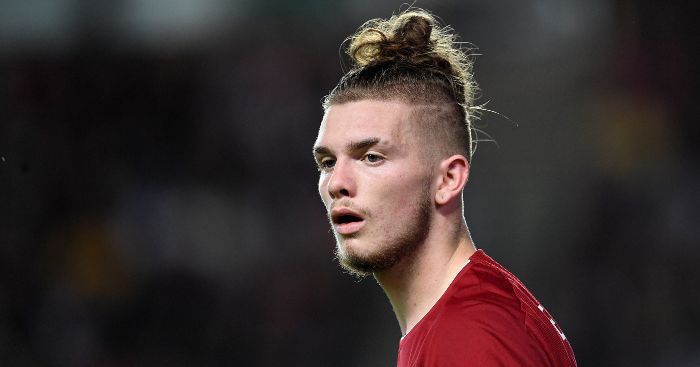 Liverpool won the race to sign Harvey Elliott from Fulham in 2019 – and those who know him best have only positive things to say about the forward.

Elliott became the youngest-ever player to start a match for the Reds and has now made made 12 appearances in his debut season at Liverpool.

The 17-year-old is tipped for a bright future and we’ve rounded up some of the best quotes about him.

“It’s easy to be convinced about him when you see him training,” Klopp said after Liverpool beat Arsenal on penalties in the League Cup.

“He is an exceptional talent, absolutely, and he’s a nice kid as well.

“To see him, how he encouraged the crowd around the corners…I had a couple of moments where I was really touched tonight, to be honest. So for a few moments, that’s really cool.

“And when I was already in the dressing room and I saw on the TV screen that he’s still doing his lap of honour and giving pretty much everything away, that’s too nice.”

Fulham Under-18 Omogbehin has witnessed Elliott’s rapid development at close quarters and told BBC Newsbeat: “From an early age Harvey’s always managed to make good decisions at the right time.

“Whether that’s rolling someone in with the perfectly weighted pass or scoring himself. He’s real top end.”

Omogbehin added: “When he was 14 he played in the Under-16s against top quality opposition and he stood out. He was the best player on the pitch.

“Then we threw him in to the Under-18s last year and he’s done it again. That’s when you think, ‘Hang on a minute we might have another one here.'”

Althought Omogbehin did single out one drawback with Elliott:  “That’s his only fault, he needs to get a new hairstyle!”

Former England international Parker made Elliott the youngest player in Premier League history when he gave him his top-flight debut against Wolves in May.

“He is a technically gifted football player,” Parker said. “A special talent. He has got a naturalness about him, an ease. He is very clean with the ball, can handle the ball very well for someone so young.

“Harvey has played all his career with kids his own age and now is probably the first time he is playing against men. Often you find that transition is very difficult for young players.

“But with him you wouldn’t know and that’s probably the sign of a top player or someone who has the ability to be a top player because the transition he has made has been very smooth.”

Jokanovic handed Elliott his first-team debut in a League Cup victory at Millwall when the attacker was still just 15 years old.

“We believe the future can be bright ahead of him,” Jokanovic said afterwards. “He had some tests at school today and he must be at school tomorrow morning. He is arrogant but in a positive way.

“This kid shows he has personality. He says, ‘I want to show you I am a very good player.’ I say, ‘Okay if you can show me, I give you this opportunity.'”

Back to Parker, who heaped more praise upon Elliott after his Premier League bow.

“Harvey is on the bench and gets on the pitch because he deserves to,” he said. “He’s been outstanding in training over the past three weeks. He’s a special talent and we want to nurture him the best we can.”

“He is not too far because he trains with the first team on a regular basis, so he has had first-team exposure already,” the Liverpool Under-23s coach said in December 2019. “The manager and the staff think a lot of him.

“I thought he was a constant threat, a really good outlet for us. He was reliant on others getting the ball to him, and I thought the service to him was top class as well.”

What a player we have on our hands 🙌🔴 pic.twitter.com/apN3JNuYbx

Fulham captain Cairney is another former colleague at Craven Cottage that couldn’t help but be impressed by the teenager.

“He’s been sensation since he joined in training a few months ago,” Cairney said. “We see him maybe twice a week. He doesn’t look out of place and does some bits of magic that everyone says ‘wow.’ His attitude and his belief in himself at such a young age is frightening.”

Cairney added: “He’s a tricky winger who plays in the hole. He’s got a great football brain, an eye for goal and is a very entertaining player. Hopefully he will have a long and successful career.”

A former midfielder for both Liverpool and Fulham, Murphy is expecting big things of Elliott.

“They always have the option to send him out loan [this season] but I’ve got a feeling they really must think he is ahead of his time,” he told talkSPORT in 2019.

“It might not transpire this summer, but in the next couple of season I would imagine they’re hoping he develops to get some first-team action.”

He continued: “He’s a great dribbler, he’s very sharp and he’s got good feet. He could play in one of those front three roles, that’s probably where we’d see him get his go.

“We’ll probably see him in a cup competition this season. I think this kid could be a superstar and if he has got the talent to do it, he’s at the right place.”

“Harvey Elliott – we were watching him and he’s 16 years of age. From minute one he was trying to get on the ball. He looked the real deal,” Redknapp said on Sky Sports in 2019.

“There were a couple of the things he did but there was one or two passes – and I don’t know why – some left footers are gifted with.”

In a dismal season collectively, the emergence of Elliott was at least one positive Fulham owner Khan could draw from 2018-19.

“I have one last note on football and it’s a good one. I want to send my best to Harvey Elliott, another product of the spectacular Fulham academy, for making his Premier League debut as a member of our First Team last Saturday at Wolverhampton Wanderers,” he said.

“You know the rest of the story – by coming on in the 88th minute, Harvey became the youngest player ever to compete in a Premier League match, 16 years and 30 days, to be precise.

“It was a great moment for Harvey as well as for Huw Jennings and his exceptional Academy staff, and it was richly deserved.

“No one walks onto a Premier League pitch unqualified, not even for a cameo or spot appearance in added time. All of England and much of the football world took notice, and it was unquestionably one of my proudest moments being affiliated with this historic and beloved club.”

Following Elliott’s first-team breakthrough, The Sun spoke to some of his teachers at Coombe Boys’ School in New Malden, south west London, which also helped develop the Sessegnon brothers.

After Elliott made his debut against Millwall, headteacher Smith said: “He was back in school the next day, but he kept his head down.

“Harvey’s quite a modest guy by nature. As far as he was concerned, it was just a normal day. I think he was very keen not to show off. I don’t think that’s part of who he is.

“He has a very supportive family and we work very hard in partnership with Fulham to make sure he doesn’t get big-headed.”