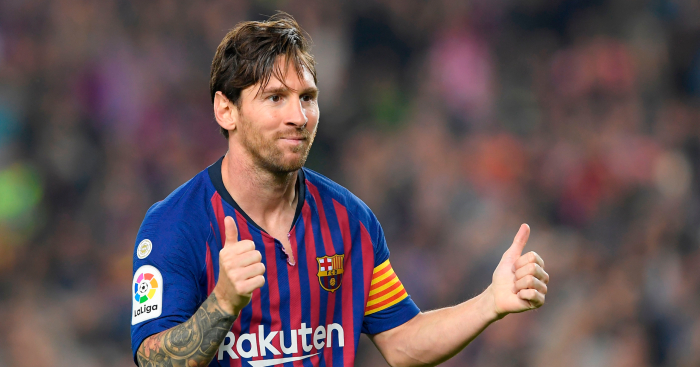 While 2018 may have been defined by chaos and uncertainty around the world, there has at least been one thing we could always rely on: Lionel Messi being f*cking brilliant.

We’re not going to get into the Ballon d’Or debate because, quite frankly, we can’t be arsed. But sometimes it’s worth reminding yourself of the ridiculous standards the Barcelona man has set – and which he continues to reach year after year.

With Messi’s calendar year now over, and with just the 77 direct goal contributions to his name in 54 appearances, we’ve rounded up some of the best stats about the GOAT’s year.

– Messi ends 2018 having scored 51 goals and provided 26 assists in 54 appearances for club and country.

– Messi has now scored 50+ goals in eight of the last nine years.

– Messi went a record 49 La Liga games without tasting defeat, having missed Barcelona’s sole loss of the 2017-18 season, before appearing in the 2-1 defeat at Leganes this season.

– Messi has failed to score or assist in just three of his 20 appearances for Barcelona this season.

– Messi has scored as many La Liga goals as the entire Valencia side this season.

– In 2018-19, Messi is averaging a goal or assist every 48 minutes, the most prolific rate of his entire career.