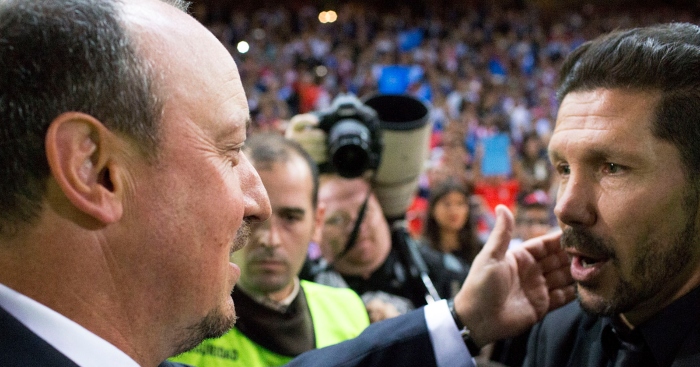 While Spanish football is dominated by the duopoly of Barcelona and Real Madrid, Valencia and Atletico Madrid have both stolen the limelight since the turn of the Millennium.

Between them, Barca and Real have won 58 La Liga titles, while the triumphs of every other club in Spain combined add up to only 29.

Valencia and Atletico Madrid are the only other teams to have been crowned champions since 2000-01, and there are a remarkable number of similarities between the two sides.

Kicking off the list of eerie resemblances between Valencia’s crusading side from 2001 – 2004 and the Diego Simeone-era at Atletico Madrid is the startling similarities with their respective silverware.

Like insubordinate revolutionaries, Valencia and Atletico both broke up the ruling class.

Fifteen of the last 17 La Liga titles had gone to either Real Madrid or Barcelona before Valencia’s 01-02 triumph. And following Valencia’s 03-04 La Liga crown, the duopoly returned, with nine consecutive La Liga’s ending up in the capital or Catalonia before Simeone’s men upset the status-quo in 2013-14.

They’ll give you a stare and you know. You just know. Valencia and Atletico boasted fearsome and intimidating defenders at the heart of their back-line.

Roberto Ayala was a linchpin at the back for Valencia, instrumental in both their title-winning sides, and though he is referred to as ‘El Ration’ – which translates to mouse – there was nothing meek about his defending.

Similarly, Diego Godin has been a vital component in Simeone’s uber-disciplined defensive machine.

Two players you just really, really wouldn’t want to mess with. The kind of defenders your Sunday League striker shits out of tackles from. In fact, you all do. 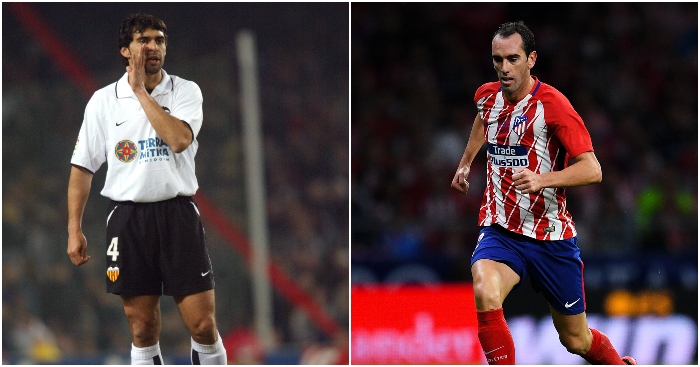 Another striking similarity between both team’s epochs arrive in the form of their incredible defensive records.

In both of Valencia’s league-winning seasons, they conceded just 27 goals. And Atleti? Just 26.

With just one goal between them, this is more a testament to the stubbornness of their defence than a whimsical – and quite spooky – coincidence.

As a constellation of stars glittered at Real Madrid and Barcelona – during both periods – Valencia and Atletico have had to make do with relatively meagre transfer budgets.

In the summer before Los Che’s 01-02 La Liga triumph they spent just £9.2million, and when Rafael Benitez led them to a European and domestic double in 03-04 he did so on the back of a paltry £900k outlay.

Similarly, Atletico Madrid’s 13-14 La Liga title – a year that also saw them come runners-up in the Champions League Final – was funded by a net spend of minus, yes minus, £31million.

There’s nothing more satisfying than your side winning 1-0. Most of the joy comes not from your own team’s success, but from seeing the pained and agonised expressions of the opposition players, coaches and fans.

A 1-0 win mocks the opponent, teases them into thinking they’re close. When really, they’re not.

We only need one goal to beat you. Just one goal. It’s the ultimate schadenfreude.

Valencia and Atletico Madrid revelled in this ability to grind out a result, actively welcoming wars of attrition.

And during Atletico’s 13-14 success, they battled to six terse-yet-wonderfully abrasive 1-0 wins.

Not enough credit for good football

While both teams can be characterised by a commitment to defensive diligence, they seldom receive the credit they deserve for their attacking play.

A fine example of the qualities of Rafa Benitez’s Valencia came in 2002-03 when they waltzed their way past Liverpool, winning 2-0.

And for all Atleti’s stubbornness, in Antoine Griezmann, the Spaniards currently possess one of the most graceful players in the world.

Simeone’s side dovetail obstinacy at the back with purpose up front and, like Valencia, should receive more praise for their attacking exploits.

End of an era?

Benitez’s parting gift was to win the UEFA Cup in the 2003-04 season. With it signalled the end of the era as Valencia have claimed silverware just once – the Copa Del Rey in 2007-08 – since Benitez’s move to Anfield.

Though this may be a bit premature, it’s hard not see Atletico’s Europa League triumph as a similar portend. Griezmann is expected to leave soon, and speculation abounds regarding the future of head-coach Simeone.