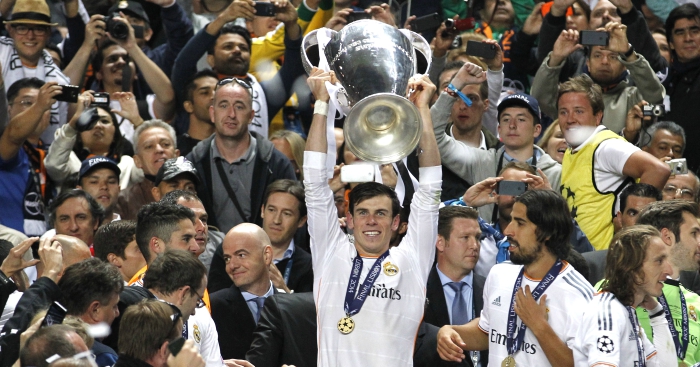 Gareth Bale has established himself as one of the greatest talents of his generation during his career for Southampton, Tottenham and Real Madrid.

Having burst onto the scene as a prodigious youngster in the Championship, Bale has never done things the easy way and has had plenty of doubters throughout his career.

However, while he may have been dogged by fitness problems over the past couple of seasons, he has now shone on the highest stage for both club and country – and it’s hard to argue with his achievements.

He first came to Southampton’s attention at the age of nine, and in April 2006 he became the second youngest player to represent the club.

Operating at left-back, Bale swiftly began to attract wider attention thanks to his taste for spectacular free-kicks. By the end of his first full season, he was named Football League Young Player of the Year. He was still just 17.

From Southampton to Real Madrid via Tottenham.

A month after making his senior Southampton debut, Bale became the youngest player to ever play for Wales and made an instant impact. Coming off the bench against Trinidad and Tobago, he provided the assist for Robert Earnshaw’s winner.

Five months later, he broke another record, becoming Wales’ youngest ever goalscorer with what was already becoming a trademark free-kick.

As a player who grew up idolising Ryan Giggs, he was already showing the potential to become the Manchester United hero’s eventual successor.

Welcome to the big time

While Bale enjoyed a meteoric rise at the start of his career, after joining Tottenham in 2007 he was hit by the harsh reality of top-flight football.

Despite scoring a – you guessed it – free-kick in his first north London derby, fitness problems saw the teenager struggling to initially establish himself at Spurs, and he missed the club’s League Cup final triumph due to injury.

It was not until September 2009, two years after initially joining the club, that he tasted victory for the first time in a Premier League match. And only a month later he was being linked with a transfer to Birmingham City or Nottingham Forest.

It’s hard to pinpoint the exact moment everything changed for Bale, but it’s easy to remember the night he announced himself to the world.

Having drawn one and won one of their opening two Champions League group stage fixtures, Spurs were given a real welcome to the competition by reigning champions Inter, who raced into a 4-0 lead during the first half of the San Siro.

Quite what took hold of Bale at half-time remains a mystery, but he came out and single-handedly tore Inter apart, scoring a remarkable hat-trick and leaving one of the world’s best right-backs in Maicon on the verge of a nervous breakdown.

“He’s got everything,” Harry Redknapp said. “You couldn’t even put a value on him.”

From that moment on, Bale transformed into one of the most irresistible footballers in the world, becoming the definition of a ‘clutch player’.

Gareth Bale’s hat-trick against Inter Milan at the San Siro is one of the greatest I’ve ever seen. pic.twitter.com/z0jt7VBFCy

Most expensive player on Earth

Despite what Redknapp insisted, it transpired that you could put a value on Bale: £85million to be precise, making him the most expensive player in the world, much to the disappointment of Cristiano Ronaldo.

If Bale had initially struggled to adapt to life in the Premier League, the pressure was back on him to make a smoother transition and prove that he belonged among the world’s elite.

Ronaldo’s presence hardly made his task any easier, and Bale himself admitted to some doubts upon the completion of his transfer.

“I am not sure there is ever a good time to leave a club where I felt settled and was playing the best football of my career to date,” he said.

Thankfully, six years on from making the first big leap in his career, he was much better prepared for the second.

While Bale has never been far away from criticism in Spain – albeit he is not the only player to fail to match Ronaldo’s exploits – he has still produced a number of decisive moments for Los Blancos.

With five minutes remaining of the 2014 Copa Del Rey final, the scores were locked at 1-1 as Real faced off against Barcelona.

In the absence of the injured Ronaldo, Lionel Messi sensed the chance to steal the limelight and attacked inside Madrid’s penalty area.

When the move broke down, the ball found its way to Bale, still inside his own half, who proceeded to pull out his best impression of Roadrunner – as a 14-year-old he could run 100 metres in 11.4 seconds – and scorch the Barca defence before poking the ball home.

“That is what any player wants to do, score big goals in big games,” he later told The Independent – and he went on to repeat his feat on an even grander stage.

Months later, Real faced city rivals Atletico Madrid in the Champions League final and, after Sergio Ramos scored a late header to take the game to extra-time, it was Bale who came up with the game-breaking goal deflating the opposition as his side went on to win 4-1.

Coming off the back of winning his second Champions League title, scoring in the penalty shootout victory over Atletico Madrid, Bale had the hopes of a nation resting on his shoulders as Wales traveled to their first major tournament since 1958.

But Bale and co. went beyond their country’s expectations, topping Group B ahead of England before knocking out Northern Ireland and Belgium – the latter of which in a thrilling quarter-final.

Without his partner in crime Aaron Ramsey, who was suspended for the semi-final against Portugal, Bale could not inspire Wales past his Real team-mate Ronaldo, but by that point he had already cemented his place in his country’s folklore.

In an interview with The Guardian conducted during the tournament, Bale reflected: “Whenever I have played for Wales it has always been my dream to qualify for a major tournament and to test ourselves on the bigger stage.

“We are doing that now and I think we are thriving and everybody is waking up and seeing what Welsh football is about.”

Bale’s last few years at Real Madrid have been punctuated by injury frustration, so much so that he had to contend with a place on the bench as they faced Juventus in the 2017 Champions League final.

No doubt he would have preferred to have been afforded more minutes, but the chance to lift most prestigious trophy in club football at the Millennium Stadium in Cardiff was a fitting reward for one of the finest footballers of his generation.

Bale suffered the same fate 12 months on as Real made the Champions League final again, but it was the night he secured a place in Real Madrid’s history books.

Coming on in the 61st minute with the score 1-1 against Liverpool, Bale scored one of the tournament’s finest ever goals less than three minutes later when he reached an incredible height to convert Marcelo’s cross with a sensational bicycle kick.

He later scored a second to secure his fourth Champions League winners’ medal. Not bad for a lad who couldn’t get in Spurs’ team at one point.