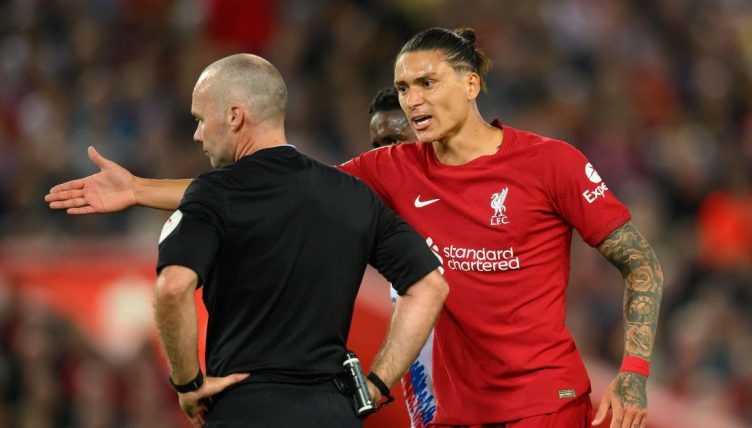 In 382 matches as Liverpool manager, Jurgen Klopp has seen one of his players sent off just nine times.

That means Liverpool fans often only have to see one red card a season, with red cards coming at a rate of one every 42.44 games.

But a red card has already come in 2022-23, with Darwin Nunez sent off for headbutting Crystal Palace’s Joachim Andersen, the first time the Reds have had a player sent off since December 2021.

Here’s a breakdown of all the times that a player in Klopp’s Liverpool team has been sent for an early bath.

The most recent of the Reds’ reds, Nunez was sent off during the 1-1 draw with Palace at Anfield for sticking his noggin on Joachim Andersen.

The Palace player was clearly winding him up before Liverpool’s new Uruguayan striker lost the plot and sent Andersen crashing to the ground like a felled Danish pine tree.

Referee Paul Tierney was just a few yards away and immediately waved his red card in Nunez’s direction.

After the game, Klopp said: “Darwin knows [he let his team-mates down]. I will talk to him. It was not a reaction we want to see.

"I cannot believe how he thinks he's going to get away with that!" 😤@Carra23 and @GNev2 take a closer look at Darwin Núñez's moment of madness that saw the Liverpool man sent off 🟥 pic.twitter.com/thQh0HwLda

Robertson was sent off during Liverpool’s Premier League match with Spurs at the Tottenham Hotspur Stadium, which finished 2-2.

He let fly with a sweeping kick across Emerson’s body which would have been deemed a brilliant tackle if he had won the ball… but he didn’t and instead took out the Spurs wing-back and was sent for an early bath after a VAR review.

Funnily enough, Harry Kane probably should have been sent off for a tackle on Robertson earlier in the match, but VAR decided it against it. Either way, Robertson was certainly deserving of his marching orders.

Finding himself outside of his box with Brighton attackers closing in on him, Liverpool’s usually reliable goalkeeper Alisson Becker found himself stuck between a rock and a hard place.

He was late to make a decision, turning to head back to goal before changing his mind at the last minute and attempting to block Leandro Trossard’s lob. Instead, he saved it with his hands outside of the box, resulting in an instant red.

For two separate challenges on Wilfried Zaha, James Milner was sent off for a second yellow card against Palace in a 4-3 thriller at Anfield.

Zaha simply had too much for the makeshift full-back and Milner rightly got two yellows, both times stretching to tackle the Palace talisman who was able to evade the challenges and win the foul.

He was thankful to avoid a similar fate during the 2021-22 season when he should have got a second yellow for a challenge on Bernado Silva when City came to Anfield.

"Everybody in football expected a red card." 🟥

Dermot Gallagher discusses the need for referees to be consistent throughout games after Liverpool's James Milner escaped a second yellow card against Manchester City. pic.twitter.com/KgVyvYvA5j

In another second-yellow-card incident, Henderson was sent off against Watford with Liverpool 2-0 up on Watford.

It was the culmination of several fouls, with the Liverpool captain having been warned plenty of times about the fact he was on thin ice after his first yellow.

When Etienne Capoue had beaten the Liverpool man and was running past him, Henderson took him out and was sent to the dressing room.

Fresh-faced at 20 years old, Gomez was yet another on this list to fall victim to a second yellow card when he caught a Sevilla player in injury time during a 2-2 Champions League thriller.

It was a sloppy, unnecessary challenge and sent the young English centre-back to the showers.

Liverpool would go on to reach the Champions League final that season and win it the next, with Gomez becoming a first-team regular.

After a bad injury, Gomez has struggled with Liverpool, having significant competition at centre-back.

Four days prior to Gomez’s red, Mane had been sent off early in an embarrassing day for Liverpool as they slumped to a 5-0 loss against City.

Mane chased a long ball over the top, with Ederson rushing out to meet him. Mane went up to meet the ball with his feet, colliding with Ederson instead and kicking him in the head just outside the box.

He was sent off and the decision caused huge debate, with many saying since he was clearly going for the ball it should not be a red.

But such debate would probably not occur today, with that sort of decision almost always given as a red now.

Australian Smith did not have an illustrious Liverpool career, making just a handful of appearances for the Reds.

On his second ever league start he saw red and Liverpool lost 3-1, but the worst thing about that match? The referee opted to use a circular red card rather than the normal one. Apparently, you can use them to distinguish between the two cards.

Yes, Milner is the only player to appear twice on this list and on both occasions it was against Crystal Palace.

It gets worse because once again he was sent off for fouling Zaha, once again a late challenge earning him his second yellow.

Oh, and Christian Benteke scored a stoppage-time winner for the Merseyside club against his future team. Football has a funny way of coming around full circle.