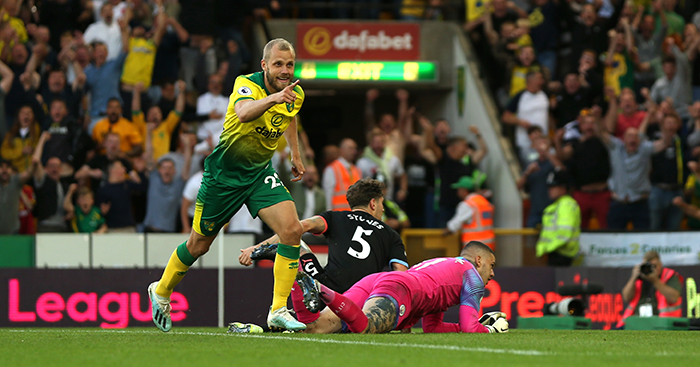 Everyone thinks they’re Barcelona this season, and it’s been brilliant for comedy goals. Here are the best of the 2019–20 Premier League so far.

Football has always been about mistakes. They’re the lifeblood of the game, and they keep us sadists coming back for more.

This season, however, we’ve been given a golden goose in the form of ultra-short goal kicks.

A change in the rules means defenders can now collect the ball from their keeper inside the box — something the Laws of the Game say should encourage “more constructive play at goal kicks”.

The rule change, coupled with an increased focus on possession football, means defenders just keep giving the ball away around their own area. And the high-risk tactic has already contributed to some brilliantly scrappy goals.

There are several nice things about this goal.

For one, a slide tackle in the opposition penalty area is football at its best, and James Maddison deserves a medal for his effort.

Furthermore, the immense cock-up by the Bournemouth defenders isn’t so much caused by anyone making a mistake, but by Ake and Mepham simply being on different planets.

The Dutchman is well within his rights to knock the ball to his team-mate deep in the Bournemouth area, since a desperate wallop could have ended up anywhere.

At the same time, Mepham is a 21-year-old with just a handful of Premier League appearances, and, as he began his confident stride straight into an opponent, he might have wondered whether Ake could have played him a kinder pass.

It was all very Bournemouth.

In United’s defence, this goal wasn’t caused by a suicidal defensive setup but by a rogue cross-field pass by full-back Axel Tuanzebe, who has clearly been watching too much Bournemouth.

The youngster could have hoofed it.

A lovely little balls-up between an own-goal specialist and a goalkeeper wearing #11.

Wolves can’t do anything right this year, so it’s no surprise that Conor Coady’s delicate touch to Rui Patricio resulted in a mis-control, an interception and a comical synchronised leap from the two culprits.

Molineux should brace for more of the same.

It’s should surprise nobody that poacher Jamie Vardy has benefitted from two defensive mistakes this year.

More surprising is how centre-back Chris Basham managed to give away a goal by dicking around somewhere near the centre-circle. Maybe playing three at the back makes defenders feel too comfortable.

And yes, it still counts as ‘playing out from the back’ if your back happens to be wandering off a cliff.

This goal would feature higher if Hugo Lloris wasn’t just wheeling out his greatest hits.

If the World Cup final showpiece with Mario Mandzudic was the Frenchman’s Woodstock, then this Danny Ings number is his desperate comeback tour, three decades later, marketed at balding dads.

This is what Danny Ings does now!

Adrián’s clusterfuck is more forgivable than the one made by Lloris, but it’s also more ‘in vogue’ since the Spaniard was at least attempting to make a short pass.

Let’s not forget, however, that Allison pulled a similar stunt against Leicester last season, so you’re never really safe.

A goal that defines a club, a manager and possibly the footballing moment we now live in, Sokratis’ lifeline to Watford contained everything you could possibly want from a goal.

David Luiz standing with hands on hips as the Greek attempts his pass. Tom bloody Cleverley sticking it away. Sokratis yelling at himself for what seems like an eternity.

Of course, Watford could have scored about six of these over the course of the match, but that hasn’t changed Unai Emery’s approach.

“To build up with the goalkeeper and centre‑back is going to be our identity, but we are going to share [that] sometimes with long balls,” he said after the game.

Was it as funny as Hugo Lloris falling over? No. Was it as gloriously predictable as Arsenal’s collapse? Of course not.

Nonetheless, Man City’s humbling at the hands of Norwich was the best game of the season so far, and Otamendi’s brainfart was the icing on the cake.

Pukki also did well to stick it in, having received a bobbler of a cross from team-mate Emi Buendía.

The cherry on top? John Stones — of all bloody people! — criticising his team-mate for giving the ball away.

Seven of the most hilariously bad throw-ins ever: Young, Aurier, Real…