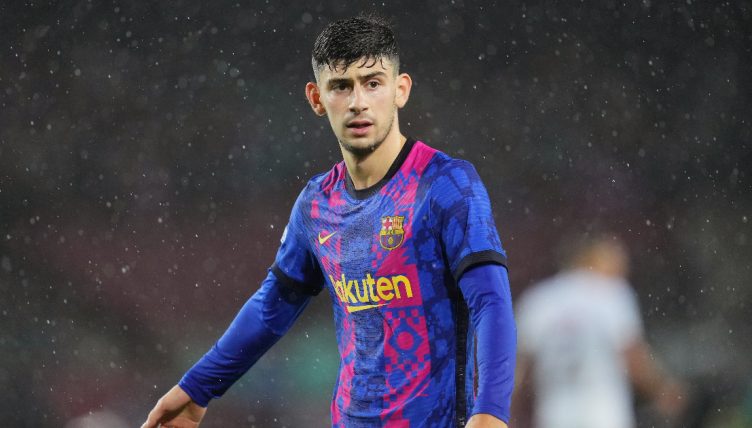 The January transfer window is always a hectic time, with clubs across Europe looking for short term fixes as well as longer-term investments.

Whilst a lot of clubs suffered financially as a result of empty stadiums during the pandemic, the biggest few clubs have not swayed in their spending so far, and find themselves in a strong position to pick up some January bargains from the continent.

La Liga clubs throughout the league would welcome extra income with open arms, meaning that some of their previously unattainable young assets could move on should a tempting offer arrive.

The Spanish top flight seems to be churning out quality youngsters, and whilst the likes of Vinicius Junior and Pedri will not be allowed to leave, there are some Under-21 players across the league worth a bid in the window.

Here are eight young La Liga stars who could be up for grabs with a decent offer.

The 18-year-old only arrived at Barcelona in the summer, but after a bright start, the Austrian international found himself unwanted by new manager Xavi and looks like he will move on as quickly as he arrived.

Joining on an initial loan with an option to buy for around £10million from Rapid Vienna, interested clubs will be able to pick up the winger for a cut-price fee, and there will be plenty of suitors given his strong technical ability.

This could be a deal that Barcelona later come to regret, should Demir find his feet elsewhere.

SO CLOSE to a golazo from teenager Yusuf Demir! 😱#UCL pic.twitter.com/AB91W742eA

A Spain Under-21 International, Barrenetxea is highly rated within the club, but despite a £55million release clause, if a top club were interested they could land the winger for a slightly lower fee.

Barrenetxea would be seen as a long term investment but as a youngster with plenty of talent and European experience to his name, who has been mooted as one of the stars of the future.

The younger brother of the ever-present club icon Inaki Williams, the 19-year-old is seen as one of Athletic Bilbao’s best prospects.

A product of Athletic’s famed youth academy, the winger was promoted after 21 goal contributions in 26 games in the youth team in 2020-21.

Williams is yet to open his account at senior level but has put in some encouraging performances in La Liga, and whilst the club would be reluctant to see him leave, they would not stand in his way should an offer arrive.

The teenager has a release clause set at just under £40million, but a lower offer could secure his signature, though this would be a gamble for a top side.

He is definitely worth strong consideration though, as his speed, power and close control all point to a bright future.

The Mexico international winger joined Real Betis in January 2019 as an 18-year-old for over £12million from Club America in his homeland.

A big fee for a teenager, Lainez has shown promise in his three years so far, but is still yet to score in La Liga in 50 appearances.

Still just 21, the right-winger possesses a lot of talent and technical ability and still has plenty of time to develop into the player he was once predicted to be, but he may need a change of scenery.

With just two league appearances this season, Lainez could be available for a fee similar to or even lower than the £12million paid three years ago, and could be a steal in the long term for most clubs across Europe.

At that age and price, he would surely be worth a punt.

The case of Joao Felix has always been a strange one. Once a £100million replacement for Antoine Griezmann, the 21-year-old often finds himself on the bench for Atletico Madrid.

A forward with immense close control and shooting technique, there were always question marks about how a young, smaller striker would fit Diego Simeone’s abrasive style of play, and two years since his arrival these questions haven’t been answered.

Atletico would demand a high fee to recoup most of what they paid for him, but the likes of Manchester City may have their eye on him as the centre forward they’ve been after for years, and given his rotational role, Atletico would be unlikely to stand in his way.

Despite the tactical issues, Felix possesses a world of talent and can still fulfil his massive potential as his career progresses.

A product of Valencia’s youth academy, Guillamon has been a shining light in a dark few years for Valencia.

The 21-year-old defensive midfielder slotted straight into the first team and hardly ever looked out of place. Now a Spain International, the youngster has been tipped as a star for the future.

Valencia rate him so highly that they gave him a new deal with an £80million release clause, but when it comes to Valencia, they can never be trusted to keep hold of their best assets.

Having sold a number of their stars below their market value in the last few seasons, any suitors for the Spaniard will hope that a bid well below the release clause could tempt the club into selling, and any top club looking for a young all-rounder will want to keep a close eye on Guillamon.

A defensive midfielder who can also play comfortably as a centre-back, his defensive strength and passing range make him an important player at Mestalla.

Another Athletic Bilbao product, the 21-year-old midfielder has become a crucial player for the club, appearing in nearly every league game this season.

A defensive-minded central midfielder, Vencedor is a strong progressive passer, and with a release clause of just under £40million, could follow in the footsteps of Ander Herrera and Javi Martinez should a top club bid for him.

Given his role in the team, a fee close to the full release clause will probably need to be paid, but the Spaniard could prove to be a smart long-term investment for any potential buyer.

Once one of Valencia’s most promising youth products ever, there was uproar when the club released him on a free transfer in the summer of 2021.

RCD Mallorca took full advantage, picking up the supremely talented Korean winger on a free, and the 20-year-old has been impressive in his first few months at the club.

Despite having a release clause of around £80million, any interested parties could land the winger for a lot less, but would still need to cough up a sunstantial fee. It could be a smart move though, as Lee’s pace and trickery make him one of the most promising young wingers in Europe.

With nine goal contributions in 30 La Liga starts, it is only a matter of time before Lee explodes and a bigger club moves in for him.

Lee won the golden ball at the 2019 under-20 World Cup, and is continuing his development into a top-quality winger.