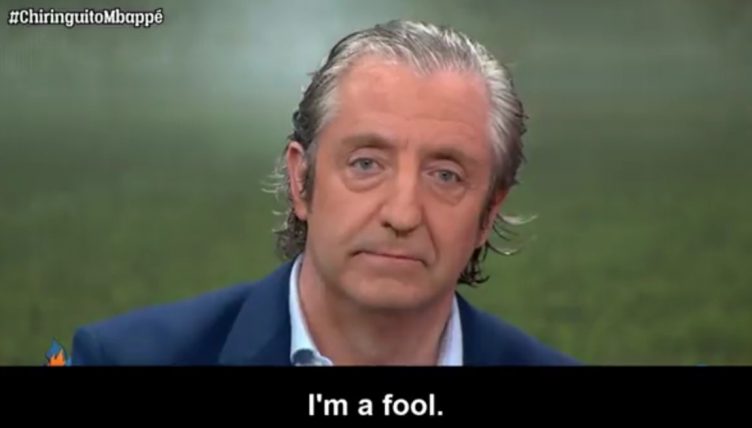 After months of speculation, Kylian Mbappe has decided to stay at Paris Saint-Germain, leaving Real Madrid standing bereft with their pants around their ankles and El Chiringuito looking especially foolish.

The Madrid-based football programme, with a penchant for amateur dramatics, came to the attention of English fans with its hilarious reaction to Eden Hazard conversing with his former Chelsea team-mates after defeat in the 2021 Champions League semis.

And the same programme has been shamelessly trumpeting Mbappe’s expected arrival at the Bernabeu for well over a year. The revelation that the 23-year-old would be staying in Paris was met with spectacular indignation.

Considering everybody in Spanish football has lost their collective shit over Mbappe’s decision, we’d have expected nothing less.

La Liga intends to report PSG to UEFA and they believe what PSG have spent to secure Mbappe’s signature “threatens the economic sustainability of European football.”

But that’s still nothing on the fawning, and subsequent rejection, of by the presenters of El Chiringutio.

We’ve charted the Mbappe-Madrid saga through the lens of the brilliantly bonkers channel and its array of colourful characters.

Real Madrid were one of the biggest supporters of the doomed ‘Super League’ project, with owner Florentino Perez pleading poverty against the backdrop of a continent-wide orchestra of tiny violins.

Less than four months later, they’d submitted a €160million bid for Mbappe. Can anybody smell bullshit?

Real Madrid have made a €160 million bid for Kylian Mbappé (with 9 months left on his contract).

Let’s have a flashback from April. pic.twitter.com/ZAngRv0A3G

Like a spoilt child, Duro wanted his Christmas present now and he wasn’t prepared to wait for finicky things like international money transactions or workplace contracts.

There's children on Christmas Eve, and then there's Alfredo Duro on the night that Real Madrid make an offer for Kylian Mbappé. And there's even a special Mbappé sound effect at 00:39. pic.twitter.com/imYcdDEUaC

No words. Just make yourself comfortable and indulge in 140 seconds of unhinged genius.

El Chiringuito have made a clock with Kylian Mbappé's face on it. And sat in silence watching it and listening to "tic tac" for several minutes. pic.twitter.com/xcy7BxkfLj

Josep Pedrerol is the lunatic at the head of the asylum, conducting the fellow inmates with his singular brand of one-eyed hot takes.

And Pedrerol opted for the playground tactic of repetition to goad the entire city of Paris. Tic Tac.

Josep Pedrerol is so convinced that Mbappé is coming that he's now trolling the entire city of Paris with "Tic tac". pic.twitter.com/sP8Xr3CtC0

You know after a successful first date when the other person has clearly mapped out your entire lives together and gets jealous when you prioritise going to the gym or spending time with friends over your embryonic connection?

No toxic boyfriend or girlfriend is as jealous as Josep Pedrerol is of PSG when Kylian Mbappé plays well and looks happy. pic.twitter.com/xsLYbTMqdX

Why wasn’t this a worldwide smash hit? Seriously? Ed Sheeran wishes he could compose something this catchy.

Cristobal Soria was waiting for the Mbappé move to fall apart all summer. He could only celebrate (and troll) in the form of song. pic.twitter.com/C83bk4Ho5l

“This was one of the best Mondays of my life”, he proclaimed, as his wife and children gnashed their teeth.

And, with Mbappe staying in Paris and preparing to sell Neymar, this clip remains a warning about foolishly assuming anything in this fickle existence.

"This was one of the best Mondays of my life", says Edu Aguirre because Mbappé gave an interview.#TicTac pic.twitter.com/aw0t1MlMhm

Mbappe’s Nations League-winning goal against Spain last October was allowed to stand, despite him being in an offside position, because Eric Garcia had touched the ball on the way through.

None of these hyenas gave a fuck about the laws of football. Cue conspiracy, farce and general bedlam.

A quick check in to see how El Chiringuito is coping with the Mbappé offside decision…
Oh… pic.twitter.com/e2F1LwAnEa

Obviously El Chiringuito did a special Ballon d'Or show on a golden set with golden mics.
And obviously the first comment of the night was about Mbappé being left-handed. pic.twitter.com/lw2bT2dv7I

It’s common knowledge that New Year’s Eve is the most overrated night of the year; the overpriced club entry, the pressure and expectation to have a good time and the gnawing sense of your own mortality as another year looms.

But El Chiringuito did things differently, choosing to celebrate Mbappe’s PSG contract entering its final six months with the bastardisation of a sea shanty.

On second thoughts, what time does Tiger Tiger shut?

It’s January 1st, 2022. Which means Kylian Mbappé can sign for another club for free when his contract expires.

At least he’d be wearing a Madrid shirt before too long? Right? Oh…

After playing two of the world’s richest, and least self-aware, clubs with the skill of a one-man orchestra, Mbappe eventually announced he intended to stay at PSG and signed a new three-year contract.

Millions eagerly awaited El Chiringuito’s reaction to this jilting. And, by proclaiming that Mbappe would ‘never play for Real Madrid’ and he’d sacrificed his childhood dreams at the altar of money, Tomas Roncero gave the masses exactly what they craved.

In the face of Mbappe’s rejection, Jose Felix Diaz went ‘full sadboi’ and denounced the forward’s manliness while choking back tears saltier than the sea.

José Félix Díaz isn't happy with Kylian Mbappé and speaks to him directly.
"You'll be a great player, but never a great man." pic.twitter.com/36cWUGYOwZ

The last word must belong to Pedrerol, the man bringing down a curtain on the whole saga with characteristic flair.

Over-the-top bombast? Check. Treating a potential transfer with the seriousness of the African irrigation crisis? Of course. Acting like an earnest teenager furiously scribbling a fresh poem after being crushed by their first love? Full house.

And that last second gear change? It floored us and it’ll floor you too. Sandra!

"I'm a fool."
Josep Pedrerol reflects on his reports that claimed Kylian Mbappé was coming to Real Madrid. pic.twitter.com/XfvjGBJVqO