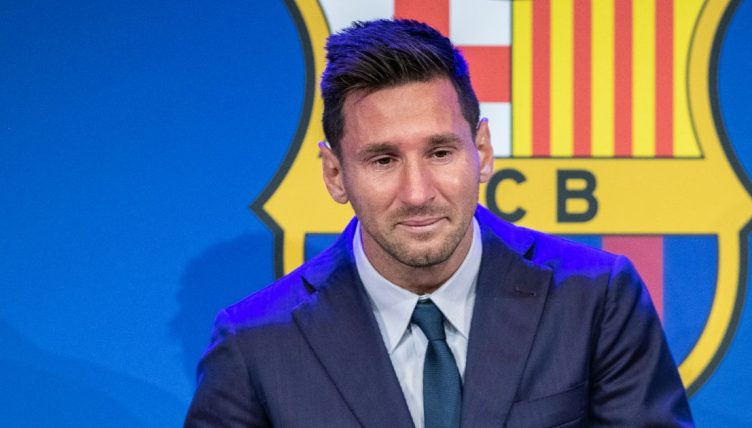 After more than 20 incredible and illustrious years at the club, Lionel Messi has officially left Barcelona.

Messi, who became a free agent at the end of 2020-21, had been expected to sign a new five-year contract but the salary cap imposed by La Liga made it impossible.

“Despite FC Barcelona and Lionel Messi having reached an agreement and the clear intention of both parties to sign a new contract today, this cannot happen because of financial and structural obstacles (Spanish La Liga regulations),” Barca said in a statement.

“As a result of this situation, Messi shall not be staying on at FC Barcelona. Both parties deeply regret that the wishes of the player and the club will ultimately not be fulfilled.

“FC Barcelona wholeheartedly expresses its gratitude to the player for his contribution to the aggrandisement of the club and wishes him all the very best for the future in his personal and professional life.”

The 34-year-old bid farewell to the club at an emotional press conference and now looks set to join PSG on a free transfer.

We’ve taken a look at how the world reacted to the huge news.

"Don`t cry because it`s over….smile because it happened." #Messi pic.twitter.com/oKZE7Ekw6l

The end is never the end…just the beginning of something.
The football world sends its best wishes Leo😘
#Messi

Are you sure there are no more twists in this story? https://t.co/RU8ndyBjnt

As a kid, you dream of playing with players like Leo Messi. Although just a year, I am blessed to have been able to play with you in this club where you made so much history. It’ll be something I cherish for the rest of my life. pic.twitter.com/vL9LOgthu3

Thanks Leo !!
Can't say much more. All the best to you and your family in the next chapter of your career. pic.twitter.com/5GvG2z5Bxz

Carles Puyol posts his thank you and goodbye message to Leo Messi on Instagram: pic.twitter.com/MgBBhQtdwk

Cesc Fabregas with this farwell message to Lionel Messi. pic.twitter.com/u2EauIMxmJ

"The worst night of my life". Someone needs to keep an eye on Cristobal Soria to make sure he gets home okay after this. pic.twitter.com/E1i9uiLhSp

Cristobal Soria has now moved into the anger stage of grief over Barcelona's farewell tweet. pic.twitter.com/IZL5289R8i

And all Pedrerol can do to comfort him at the end… is troll him. pic.twitter.com/XDAutUxTZ7

🗣 "Manchester City and Paris Saint-Germain are the top two for sure."

Manchester City and Paris Saint-Germain are likely to be among the leading clubs that Lionel Messi may join after his departure from Barcelona, says Spanish football expert Alvaro Montero. pic.twitter.com/xoeQvZ4NF7

📲 Neymar Jr just Liked a photo of him embracing Messi in a PSG kit. pic.twitter.com/5HaN0mKAoi

Club statement. How on earth have they got themselves in to this predicament? Mess que un club. https://t.co/0OFFHn4ItU

More than a player.

Sad and strange to think of the Nou Camp without Messi. https://t.co/j4Lx45VVr9

#Barca doesn't want to sign off on #LaLiga's CVC deal, which would destroy the club's Super League ambitions. LaLiga wants to bury the Super League once and for all and won't register Messi until Barcelona sign off on the deal. That's how the club lost the world's best player.

This is not the end. It's just a move in the grand power play. A drastic move, for sure, but not yet the final move. https://t.co/1KRx5l6uDU

This is very interesting. Real Madrid release a statement of opposition to La Liga's CVC investment plan. Which coincided with Barcelona's statement attacking La Liga's financial obstacles for them to re-sign Messi. A cynic could argue this is a co-ordinated attack on La Liga. https://t.co/31QtcJo7m4

And Barca know that, financially and commercially, La Liga as a whole needs Messi just as much as they do. So don’t be surprised if he stays (again) after a La Liga climb down…

I'm trying to make jokes but seriously, Lionel Messi is out of Barcelona. That's it. His last match was played without fans. No proper good bye for the club's greatest ever player. He's willing to take a 50% cut. FIFTY. And the club can't sign him. This hasn't sunk in yet.

“I can see #MCFC opting for Messi on a free instead of going for Harry Kane.” 😱

Darren Bent reacts to the news that Lionel Messi will be leaving Barca this summer. pic.twitter.com/E4yzpiLVfA

If you spam "Announce Messi" enough, you can manifest this into existence. Thems the rules. 👇 pic.twitter.com/TJwiSk2PKQ

The timeline is already Messi

End of an era. pic.twitter.com/7ONphdTukj

This is the biggest transfer moment in SPORTS HISTORY. A world where Messi isn’t at Barcelona is completely inconceivable to me.

Lionel Messi leaving Barcelona is the most heartbreaking moment in sports history. I still can’t believe it. 💔 pic.twitter.com/Vu2dsILRRV