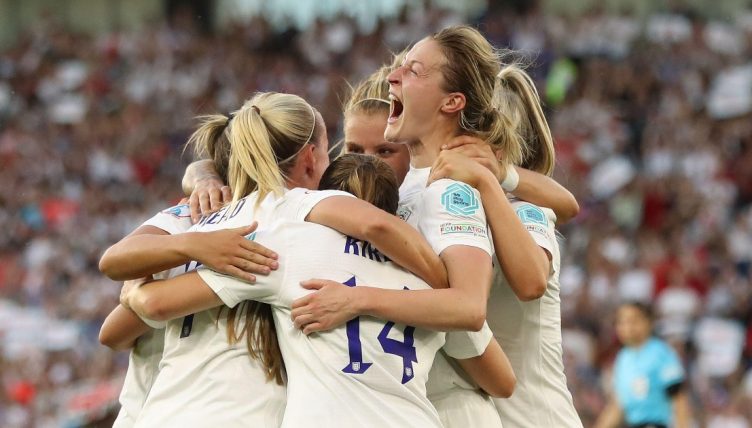 England produced a statement-making, record-breaking performance to demolish Norway 8-0 as they progressed to the quarter-finals of the European Women’s Championship.

The Lionesses are group winners with a game to spare, having beaten Austria in their opener before their thrashing of Norway at the Amex Stadium in Brighton last night.

Georgia Stanway, who has recently signed for Bayern Munich, opened the scoring from the penalty spot in the 12th minute and from there England showed the visitors no mercy.

Lauren Hemp and Ellen White fired the Lionesses three goals ahead by the half-hour mark, and soon after the contest was well and truly over.

“What’s going on here, that was going through my mind!” is how England boss Sarina Wiegman described her feelings as her Lionesses ran riot, scoring six goals by half-time, in her post-match interview with the BBC.

“We played well, Norway didn’t have the answers on our game. They didn’t get to press us. We played really well, created chances, scored chances. It was very enjoyable to watch.

“Norway didn’t have the best game today. We’re really happy with the performance. We showed how good we are. When we go through [from the group stage] we’ll get tested at a higher level. We need to do better every game.

“We really showed our qualities. The fans have been really nice again, almost 30,000 of them. We just need to enjoy that moment, relax a little bit then start preparing for the next game.”

Arsenal forward Beth Mead scored their fourth and fifth goals in the 34th and 38th before completing her hat-trick with England’s last goal in the 81st minute. Alessio Russo, who replaced White in the 57th minute, also got on the scoresheet, notching nine minutes after her introduction.

“I can’t put it into words. I’m just loving being here, loving being part of this team and loving every minute,” Mead told the BBC.

“It’s an incredible feeling to feel how I do right now. I don’t think I even dreamt of this. I’m just so happy I got the goals to help the team.”

Here are nine of the most impressive stats from England’s astonishingly dominant win.

– No side has ever before scored eight goals in a European Championships match, either in the men’s or women’s tournament. It’s the highest margin of victory ever recorded in the competition, beating the previous record set by England in their 6-0 win over Scotland in 2017.

– Prior to this match, England had won just five and lost 13 of their previous 21 meetings with Norway, who are at their 12th Euros – the joint-most alongside Italy. The Lionesses scored 17 goals and conceded 41 in those previous meetings.

– Norway are ranked 11th in the world, and, in part thanks to the return of talismanic player Ada Hegerberg, were tipped by many as Euro 2022’s dark horses.

– The Lionesses registered 25 shots to Norway’s four, and 15 on target to Norway’s one. As dominant as it gets.

– The xG difference between the two sides was as big a gap as you’re ever likely to see.

– England’s six-goal lead at half-time means that they’re able to play without any pressure for 50% of the group stage. They were able to take things down a gear in the second half against Norway, with top spot all but secure, while Wiegman has the luxury of resting and rotating for the upcoming dead rubber against Northern Ireland.

– Ellen White is now up to 52 goals for England. That’s one goal off matching Wayne Rooney’s record – for men and women – of 53.

– After her hat-trick, Beth Mead is now the frontrunner for the golden boot. She’s scored four goals from just six shots, which is an astonishing 67% conversion rate, averaging a goal every 39 minutes so far.

– England remain unbeaten under Wiegman. In the 16 matches she’s taken charge of, the Lionesses have won 14, drawn two, scored 93 goals and conceded just three. How’s that for an aggregate scoreline?