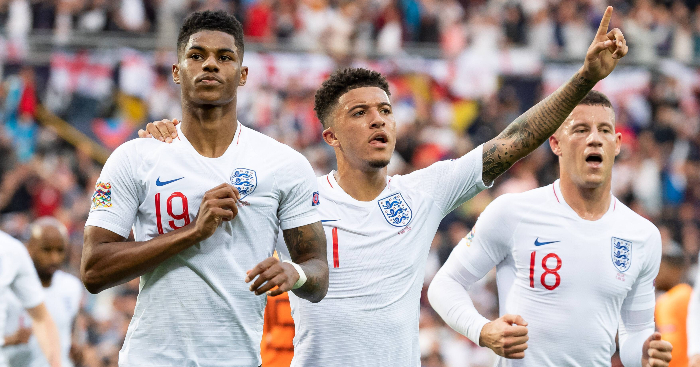 England suffered their first qualifying defeat in a decade as they were beaten 2-1 by the Czech Republic on Friday night, resulting in some criticism for Gareth Southgate’s team selection.

We’ve taken a look at all the players in and around the national team squad to have featured prominently for their clubs this season, comparing their stats to see who’s in the best form and most worthy of a place in the Three Lions’ starting line-up.

We’re looking at the positions where there’s still seemingly something up for grabs, leaving out the non-negotiable core of Jordan Pickford, Harry Maguire, Jordan Henderson, Raheem Sterling and Harry Kane.

Leicester City’s Ben Chilwell has largely been expected to take the mantle of England’s first-choice left-back from Danny Rose going forward, but Southgate continues to keep the faith with the more experienced of the two players.

Neither player has a goal yet this season, while Chilwell has registered one assist (one more than Rose).

The Tottenham man is the tidiest passer of the two, averaging a pass completion rate of 83.1% to Chilwell’s 75.8%, also playing more key passes (the final pass before a team-mate takes a shot) – 1.3 to 0.8. Rose completes 0.9 dribbles per game, marginally more than Chilwell’s 0.7 average.

Southgate has kept the faith with Everton centre-half Michael Keane, but a series of less-than-convincing performances at the back for the Three Lions could well see somebody else partner Maguire in the centre of defence next summer.

With Liverpool’s Joe Gomez and Manchester City’s John Stones struggling for game-time, there have been first call-ups for Aston Villa’s Tyrone Mings and Chelsea’s Fikayo Tomori.

Tomori is the keenest tackler of the three. The Chelsea youngster averages three tackles a game in the Premier League this season, ten times as many as Mings (0.3) and nearly three times as many as Keane (1.1), and also averages considerably more interceptions (2.8) than Mings (1.3) and Keane (1.5).

The big discrepancy in certain stats tell us a lot about the player’s individual styles, but also the roles they’re asked to play for their clubs. Mings makes the most clearances by a distance – 7.5 per game, with Keane (3.9 clearances per game) and especially Tomori (1.4) much less focused on just getting rid.

Tyrone Mings: Has made more clearances (39) than any other player in Europe's top five leagues this season

Like his former Spurs team-mate on the opposite flank, Kieran Trippier continues to get international starts following his role in England’s run to the World Cup semi-final in 2018, despite a subsequent drop-off in form and the emergence of exceptional competition.

Trent Alexander-Arnold continues his rapid ascent at Liverpool and has often been one of their most incisive players going forward this season, taking his place amongst Europe’s top chance creators so far this season.

Now plying his trade for Diego Simeone’s Atletico Madrid, Trippier’s given himself a new challenge as he attempts to adapt his game under one of the most demanding coaches in football in a new league.

It’s 21-year-old Alexander-Arnold that comes out on top in most key areas so far this season. Offensively, he’s scored one goal and provided two assists in the league, while Trippier has provided one assist and scored no goals in La Liga so far. Alexander-Arnold also averages 3.5 key passes a game, more than twice as many as Trippier (1.4).

It still doesn’t quite feel like Southgate has cracked the midfield conundrum for England, as he continues to toggle between three in the middle. The recent line-ups suggest that it will be Declan Rice, Henderson and one other going forward – a place that could be up for grabs.

Leicester City’s James Maddison has been given call-ups but is still waiting to make his full international debut, while Chelsea duo Ross Barkley and Mason Mount have been given opportunities in recent weeks.

With Aston Villa’s Jack Grealish also waiting for a call-up, it’s safe to assume Southgate is looking for a more controlling, patient presence in midfield rather than something a bit more dynamic.

Mount could potentially provide a balance. He averages a goal every 177 minutes for Chelsea this season, with four in total, while Maddison averages one every 311 minutes, scoring twice for Leicester so far. Barkley is yet to score from 296 league minutes.

Both Mount and Barkley are yet to provide an assist this season, while Maddison has registered two.

Mason Mount is on fire 🔥🔥🔥pic.twitter.com/TN1SoFUE5z

There’s quite a contrast between the form of Jadon Sancho and Marcus Rashford for their respective clubs so far this season, although it should be noted that Sancho plays the same wide attacker role at Borussia Dortmund as he does for England, while Rashford has largely been deployed as a centre-forward by Ole Gunnar Solskjaer.

Both players have three league goals so far this season, Sancho averages one every 180 comparison while Rashford averages one every 228 minutes. But Rashford has only scored once in his last 13 appearances for club and country, since the brace he scored against Chelsea on the opening weekend of the Premier League season.

Sancho has five assists already, averaging one every 108 minutes, while Rashford has two and an average of one every 343 minutes.

Rashford has been a lot less involved in Manchester United’s general play than Sancho has for Dortmund this season so far: he averages 23.3 passes per game, while Sancho averages more than twice as many, 53, with a much higher pass completion rate – 87.1% to Rashford’s 71.5% average.