19 of the best stats, memes and reactions to England’s big World Cup win over Wales 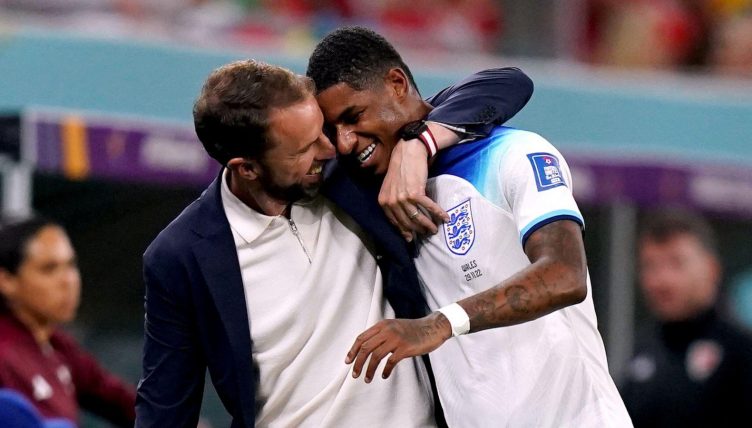 England booked their place in the last 16 of the World Cup in style with a brilliant 3-0 victory over old foes Wales.

The result means that Wales leave Qatar, having finished bottom of the group.

Players including Sorba Thomas and Kieffer Moore had spoken pre-match of how they’d relish the prospect of eliminating England.

But it wasn’t to be for the Dragons, who famously went viral on social media six years back as their dressing room celebrations over England’s Euro 2016 exit to Iceland didn’t go forgotten in the build-up to this make-or-break World Cup clash.

The first half was relatively cagey and not a million miles away from the shape of Friday night’s bore draw against the USA. Gareth Southgate had made a number of changes, bringing in the likes of Marcus Rashford and Phil Foden, and his selections were vindicated when England stepped it up a gear immediately after the break.

Rashford put England ahead with a brilliantly-taken free-kick and within a matter of moments, Foden doubled the lead.

The Manchester United forward made it three on 68th minute, doing brilliantly to cut inside and finish after taking down a long ball forward from substitute Kalvin Phillips.

The brace means that Rashford is now tied as the joint top-scorer in the competition, alongside France superstar Kylian Mbappe, Ecuador forward Enner Valencia and the Netherlands’ breakout star Cody Gakpo.

“It’s great for him, he has trained really well. He has been impressive since he came back to us, he could have had a hat-trick. That free kick is what he is capable, it’s an incredible strike,” Southgate told the BBC.

“In moments I thought both of them [Rashford and Foden] were quiet in the first half, so we switched wings. They responded well, for both to get goals was great.”

“We were disappointed as a team after the last game, we could have played a lot better. The only way to bounce back is to play better in your next game.

“Moments like this, this is what I play football for. I am really happy today to be going into the next round of the tournament, because I have massive ambition for this team and I think we can go a lot further.”

Here are 19 of our favourite moments, memes and reactions as well as the best standout stats from England’s 3-0 win.

Gareth Southgate was asked to describe why England v Wales is a local rivalry…😳 pic.twitter.com/348M9JrsbF

Marcus Rashford is the first #MUFC player to score three goals at a major tournament for England since Sir Bobby Charlton at the 1966 World Cup.👀🏆 pic.twitter.com/TnlQpxcSQ2

Marcus Rashford has now scored as many World Cup goals as David Beckham (3), and more than Wayne Rooney (1).

United past and present representing England on the biggest stage. 🔴 pic.twitter.com/8A0jEvDyku

This is, by an absolute mile, the best atmosphere of the World Cup so far. (even with still quite a few empty seats). Proper noise. #USAvIRN

England and Wales fans boo as Gianni Infantino appears on the big screen.

At the last World Cup, Jude Bellingham hadn’t even made his debut for Birmingham Under-23s 😮‍💨

All of Scotland when Senegal play England in the next round. pic.twitter.com/lysJ4OLUn5

READ NEXT: A superb XI of players left out of England’s 2022 World Cup squad

TRY A QUIZ: Can you name every player to score for England under Southgate?