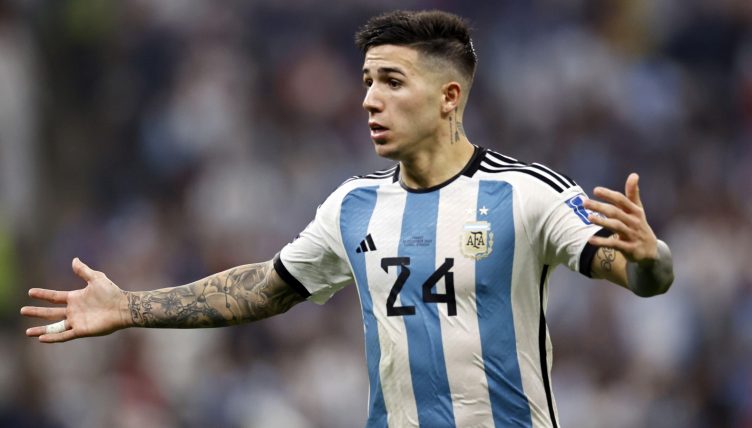 Chelsea transfer target Enzo Fernandez has demonstrated his potential on the biggest stage of all, having shone in Argentina’s World Cup triumph in Qatar.

It’s been a meteoric rise in 2022 for Fernandez, who was still playing for boyhood club River Plate this time last year. He’s now lifted the most prestigious trophy going, having made himself indispensable to Argentina’s midfield.

The 21-year-old only just moved to Benfica in the summer, having played a vital role in River Plate’s Argentine Primera Division last term. He joined the Portuguese giants for just €18million and immediately looks one of their star assets – it’s less than six months later and Fernandez is now being valued at more than five times that.

“Enzo Fernandez, I like this guy. 21 years old – he’s done nothing but enhance his reputation. There will be clubs sniffing around him. Top, top clubs,” said former Manchester United defender Rio Ferdinand, speaking as a pundit on the BBC during the World Cup final.

“He was so composed, for a kid so young at this level. Tactically very good as well.”

“He showed his personality, class on the ball. I think maybe next summer, he will go to a better league,” added ex-Argentina international Pablo Zabaleta.

“A very complete midfielder. He can put tackles in, good on the ball and can pass it effectively.”

The latest reports suggest that Chelsea are set to get their man – for what would be a Premier League record £108million fee. Gianluca Di Marzio reports that negotiations are at “a very advanced stage” and Todd Boehly is willing to pay Benfica his sizeable release clause.

– Fernandez has completed 1328 passes in the Primeira Liga this season. That’s more than minutes played. He averages 106 passes per 90 minutes in the league.

– That’s 278 (20%) more than any other player in the Portuguese top flight. Virgil Van Dijk, Rodri and Marco Verratti are the only players in Europe’s top five leagues to have completed more passes this season, and each of those have made more appearances.

– The 21-year-old ranks top for passes into the final third (149) in the Primeira Liga. Real Madrid’s Toni Kroos is the only player in Europe’s big five leagues to have registered more (172). Fernandez also ranks top in Portugal for progressive passes (117), while only his Argentina team-mate Lionel Messi (133), PSG’s Marco Verratti and Bayern Munich’s Joshua Kimmich (125 each) have notched more in Europe’s five big leagues.

– He made more tackles than any other player on the pitch in the World Cup final (10). That’s the most of any player in any World Cup final since Italian warhorse Gennaro Gattuso in 2006.

– The midfielder only made his Argentina debut in September. The World Cup final was just his 10th international appearance.

READ NEXT: Enzo Fernandez next? 11 players that earned a move after a major tournament