The 6 players Erik ten Hag has signed more than once: Martinez, Haller… 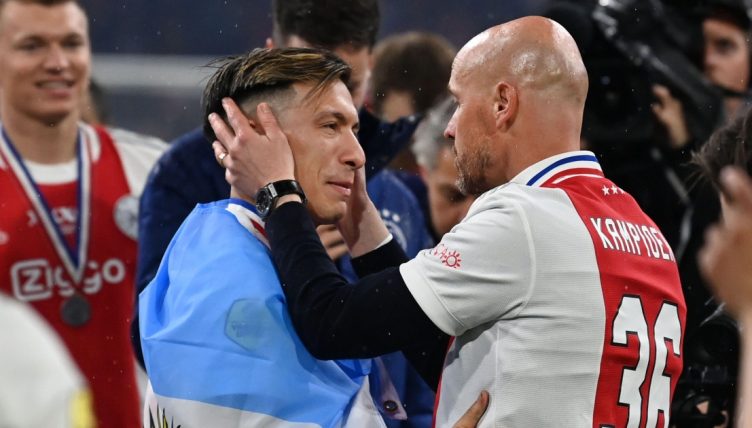 Manchester United’s Erik ten Hag has now reunited with Lisandro Martinez – but he isn’t the only player that the manager has signed twice.

Ten Hag, who has previously been in charge of Go Ahead Eagles, Bayern Munich ll, FC Utrecht and Ajax, likes to link up with some of his former players.

We’ve taken a look at the six players Ten Hag has bought more than once and how they fared under him.

Ten Hag worked with Marsmann in the FC Twente academy and then signed him on a season-long loan deal after becoming the Go Ahead Eagles manager in 2012.

The goalkeeper kept eight clean sheets in 38 appearances in the Dutch second division as Ten Hag led the team to promotion via the play-offs.

Ten Hag and Marsman both left Go Ahead Eagles at the end of the 2012-13 season but then reunited at FC Utrecht four years later.

The 31-year-old made just one FC Utrecht appearance under Ten Hag – who left for Ajax in December 2017 – but still enjoyed working with him.

“He’s very ahead tactically, he learned from Pep [Guardiola] at Bayern,” Marsman told The Sun. “I like his style. It’s a pleasure watching the teams he coaches.

“He likes to play like Pep does at Manchester City, very attacking, playing out from the back.”

Alongside Marsman, Promes also joined Go Ahead Eagles on loan in 2012-13 after previously working with Ten Hag in FC Twente’s academy.

The winger flourished under Ten Hag’s tutelage and became their standout performer, registering 17 goals and 11 assists in 42 appearances in all competitions.

“The coach was key to the success. He was very hard on me, and at first I didn’t understand why, but I came to realise that I needed it,” he said.

Promes spent the following season back at FC Twente and then had four years at Russian side Spartak Moscow. He had a difficult season at Sevilla in 2018-19 before returning to the Netherlands and joining Ten Hag’s Ajax in a €15.7million deal.

The 30-year-old got 21 direct goal contributions in his debut season, including a goal and assist in Ajax’s 4-4 draw with Chelsea in the Champions League.

But midway through the 2020-21 season, he was arrested on suspicion of stabbing a relative during a family gathering and Promes signed for Spartak Moscow a few weeks later.

Gortler joined Bayern Munich from amateur side Eintracht Bamberg in 2014 and went straight into the reserve team, who were managed by Ten Hag.

He registered nine goals and six assists in 26 Regionalliga Bayern appearances in 2014-15 and Ten Hag reportedly felt he was ready for the senior side.

But the striker became impatient and decided to join German second division side FC Kaiserslautern in search of regular first-team football.

Gortler then linked up with Ten Hag at FC Utrecht in 2017 and got a goal and three assists in 11 appearances under the manager.

“He can be very strict about what he asks for on the pitch,” he told Sport Bild in 2022. “In addition to the pitch, he is also easy-going, makes jokes, participates in normal discussions, has a say in all personal topics.

“At Bayern and at Utrecht there wasn’t a player who spoke badly of him when he left. Everyone agreed that he is a super guy who will go a long way as a coach.”

After being released by Sporting Lisbon at the end of the 2015-16 season, Labyad joined FC Utrecht on a free transfer in January 2017.

The midfielder got 13 goals and 12 assists in 42 appearances in 2017 and clearly impressed Ten Hag, who brought him to Ajax in the summer of 2018.

His four seasons at the Johan Cruyff Arena were plagued by a series of injury problems that restricted him to just 54 appearances in all competitions.

After Haller spent the second half of the 2014-15 season on loan at FC Utrecht and won their Player of the Year award, Ten Hag took over and unsurprisingly agreed to make the deal permanent for £675,000.

The striker went from strength to strength over the following two seasons, scoring 40 goals in 81 appearances in all competitions before joining Bundesliga side Eintracht Frankfurt.

He later had a difficult 18 months at West Ham United but Ten Hag still sanctioned a £20.25million deal to bring him to Ajax in January 2021.

The Ivory Coast international then exceed all expectations at Ajax and scored 47 goals in 66 appearances, including 11 in eight Champions League games. He also helped Ten Hag’s side win back-to-back Eredivisie titles and a KNVB Cup.

“He’s responsible a lot for me coming to Ajax because of course I know him,” Haller told CNN in 2022. “I know him well. I know what he’s able to do and how he wanted to use me as well.

“For me there was a lot of safety, let’s say, because I know how he wants to play. I know how good he is tactically and he will never let his players just do what they want. He always has a good view on the opponent so he gives us the keys to succeed during the game.”

Having sold Matthijs De Ligt to Juventus in 2019, Ten Hag identified Martinez and signed him from Argentinian side Defensa y Justicia in a €7mllion deal.

He initially struggled to adapt to European football but turned things around to become a key player for Ten Hag, making 120 appearances in all competitions and winning Ajax’s Player of the Year award in 2021-22.

The centre-back has now followed Ten Hag to Manchester United and Ajax have made a huge profit, selling him for an initial £46.8 million.

“He’s a warrior and I think the fans will admire him. He has an attitude, fighting spirit,” Ten Hag told United’s official website. “He brings aggressiveness in the game, in a good way. I think we need that.

“But also, he’s also skilful and he can deal with the ball and he’s left-footed.”