How Erling Haaland’s goalscoring record will translate to FPL 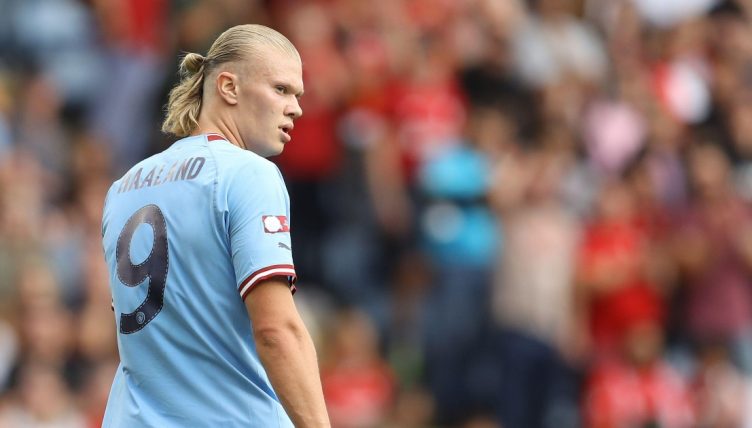 Erling Haaland’s arrival at Manchester City is one of the most hyped transfers in recent history – but will the striker live up to the hype on Fantasy Premier League?

The 22-year-old Norway international is regarded as one of the standout players of his generation and has been tipped to dominate elite European football for years to come.

No player has reached 50 goals in a major European league faster than Haaland, doing so in just 50 Bundesliga appearances for Borussia Dortmund, while he’s also become the fastest and youngest player to score 20 Champions League goals, doing so in just 14 games for Red Bull Salzburg and Dortmund.

But how would his goalscoring record stack up on FPL? He’s the most expensive forward in the game with a price of £11.5million – but will he prove worth it?

Last season, Haaland scored 22 goals and registered seven assists from just 24 Bundesliga appearances. He averaged a goal or an assist every 66 minutes.

The season before that – the youngster’s first full campaign at Dortmund and in a major European league – Haaland scored 27 goals and registered a further six assists, averaging a goal contribution every 73 minutes.

Anyone with concerns that Haaland might need time to acclimatise to a new team in a new league might want to take a look at the striker’s first half-season in Germany.

He arrived at Dortmund as a 19-year-old in January 2020 and scored an iconic 20-minute hat-trick on his debut. The teenager went on to notch 13 goals and two assists in that maiden Bundesliga campaign, averaging one or the other every 70 minutes.

In total, after two-and-a-half seasons at Dortmund, Haaland scored 61 goals and registered eight assists in 67 Bundesliga appearances, averaging a contribution every 66 minutes.

To put that in context, the top-scoring forward on FPL last season was Tottenham’s Harry Kane with 192 points, having registered 17 goals and 11 assists, averaging a direct contribution to goal every 115 minutes.

If – and this is the key question – if Haaland can maintain his attacking numbers at Manchester City over the course of a full season, he’d instantly become one of the highest-scoring forwards in FPL history.

The current points record by a forward is held by Liverpool’s Luis Suarez from 2013-14, when he notched 31 goals and 12 assists in 31 appearances.

One key question to consider is whether Haaland will be fit and available throughout the season for Pep Guardiola’s side.

Last season, he only started 24 of Dortmund’s 34 Bundesliga outings (70%), while he’s been sidelined for one reason or another eight times during his two-and-a-half years at the German giants.

A mix of knee problems, muscular problems, torn muscle fibre, hip flexor issues and knocks kept him out for a total of 146 days, leading to 28 games missed (per Transfermarkt).

“The first minutes, he needs more rhythm and time, but already he had 45 minutes which is good for him,” Guardiola said after Haaland scored on his friendly debut against Bayern Munich last month.

“We’ll see how he reacts to the niggles that he had in the previous weeks. After we come back, we have long weeks to prepare every weekend game. In those two or three weeks we will get the best form.”

City seem confident of putting that behind him and have integrated him slowly and carefully in pre-season to avoid any recurrences. He failed to score in the recent 3-1 Community Shield defeat to Liverpool, but did complete 90 minutes, suggesting he’s ready to go straight into their Premier League campaign.

A winter break while everyone else dashes off to the World Cup should stand Haaland in good stead for the second half of the campaign, too.

The underlying statistics are partly what suggest Haaland could be a real FPL beast.

Last season, City scored more goals (99) than any other side on their way to the Premier League title, doing so from 89xG (expected goals).

Under Guardiola, City consistently create more big chances than any other side in the league, while Haaland has overperformed his expected goals rate in the Bundesliga by a rate of 11.8 – suggesting he’s an elite finisher that should – in theory – convert the many chances his team-mates will provide.

There’s also a strong chance of Haaland becoming the first-choice penalty-taker, boasting a 92% conversion rate (24 of 26) from the spot in his career so far – while City have lacked a reliable and proven penalty-taker in recent years.

City have been awarded 11, nine and nine penalties in the last three Premier League campaigns and will relish having such a confident ball-striker from 12 yards.

Finally, there is the factor of “Pep roulette” in which the manager frustratingly and unpredictably uses the full depth of his squad.

You would imagine Haaland will start most weeks but never be surprised if he’s benched or rested. Last term, £100million man Jack Grealish only started 22 of City’s 38 Premier League games.

Erling Haaland missed as many big chances today (2) as he did in all of his 14 appearances for Borussia Dortmund in 2022.

After a City debut to forget, the only way is up for the Norwegian superstar.#CommunityShield pic.twitter.com/5GyDR4ahfW

The final factor to consider is the so-called Bundesliga tax, the theory that goals are easier to come by in the German top flight than in England.

The likes of Jadon Sancho, Timo Werner, Henrikh Mkhitaryan and Sebastien Haller all ripped things up in Germany before failing to maintain those numbers in England and proving total duds in FPL.

But there are some notable examples that provide a compelling counter-argument, not least proven fantasy football kings Kevin De Bruyne, Son Heung-min and Pierre-Emerick Aubameyang. Haaland’s proven record in the Champions League suggests he might just belong in this latter camp.