How Haaland & Mbappe compared with Messi and Ronaldo in 2021-22 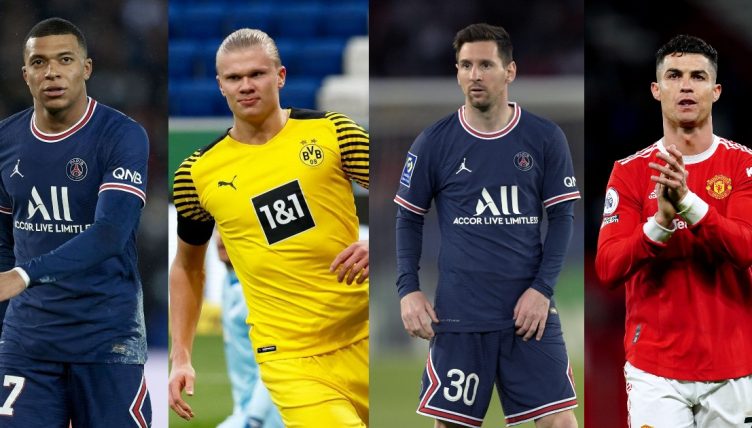 As Lionel Messi and Cristiano Ronaldo wind down their careers, two new football superstars are emerging into the vacuum: Erling Haaland and Kylian Mbappe.

Ronaldo and Messi have managed to dominate world football for over a decade and the duo have won 12 of the last 13 Ballon d’Ors.

But the PSG and Manchester United forwards are now in their mid-30s and aren’t able to hit the incredible heights that they did in La Liga.

While Neymar was once tipped to take over from Ronaldo and Messi, Haaland and Mbappe have now established themselves as the best young players in the world.

“We may see cameos or little swansongs here and there, but there is no doubt that Ronaldo and Messi are coming to the end of their careers,” former Manchester United defender Gary Neville told Sky Sports earlier this year.

“That’s not to say they are coming to the end of their careers and will retire at the end of the season; Ronaldo and Messi could play three or four more years, knowing their fitness.

“Declining seems like the wrong word when talking about two great players, but there is no doubt they are declining forces.

“At this moment in time, for the first time in years, if you asked people which player in the world they would sign if I could only pick one, no one would say Messi or Ronaldo, they would likely say Mbappe, Haaland, Mohamed Salah, Robert Lewandowski.”

Using data from transfermarkt, we’ve taken a look at Haaland and Mbappe’s club stats in 2021-22 and compared them to Ronaldo’s and Messi’s to see who comes out on top.