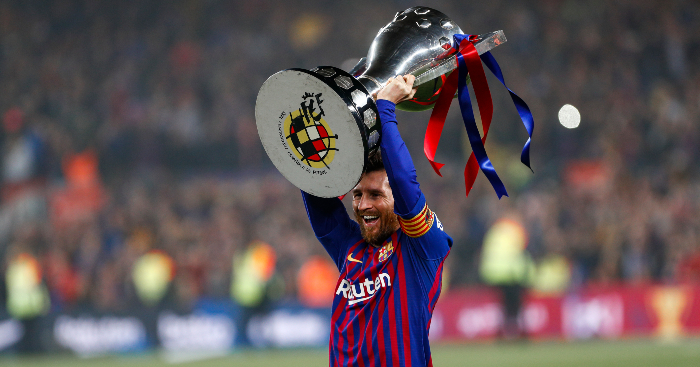 A little later than the Premier League, all the action around Europe’s other major leagues has wrapped up and we’ve got you covered for everything you need to know.

There have been some brilliant stories in European football this season, even if it was business as usual from most of the usual suspects.

We’ve rounded up the champions, domestic cup winners and relegated sides, as well as who qualified for the two European competitions from the rest of Europe’s top five leagues as well as Portugal, the Netherlands and Turkey.

The top two remained the same, as Juventus won their eighth straight title at a canter, with Napoli unable to keep the same relentless pace challenging them as last year.

Cristiano Ronaldo notched 21 goals but was only the fourth top scorer as 36-year-old Fabio Quagliarella at Sampdoria won the race with 26 in total.

There was plenty of final day drama as AC Milan and Roma missed out on Champions League qualification. Inter only just made it again, but the story of the season was undoubtedly third-place Atalanta. It’s the first time they’ve made it into the prestigious competition, which is some consolation for losing the Coppa Italia final to Lazio.

Chievo, Frosinone and Empoli – who battled hard until the final seconds against Inter – were relegated.

Valencia enjoyed a remarkable second half of the season to snatch fourth place and make it into Europe’s top competition for a second year running, after a terrible run of results that saw calls for manager Marcelino to lose his job before Christmas. Not only that, but they just beat Barcelona in the Copa del Rey to lift their first silverware in over a decade.

Getafe, so close to a remarkable story, have to settle for the Europa League along with Sevilla. Promoted sides Rayo Vallecano and Huesca went straight back down, along with Girona.

An eighth straight title for Bayern Munich, but they had to work for this one more than any other after a fine challenge from Borussia Dortmund, who took things down to the final day. Niko Kovac’s side made it a domestic double with a 3-0 win over RB Leipzig in the DFB-Pokal final.

Leipzig boasted the best defence in the Bundesliga, but they were second best on the day. Still, they achieved their goal, finishing third. Director of football and interim manager Ralf Rangnick leaves his successor, 31-year-old Julian Nagelsmann, with Champions League football.

Bayer Leverkusen, managed by former Dortmund and Ajax boss Peter Bosz, finished fourth. After a remarkable campaign, Eintracht Frankfurt missed out on Europe altogether, as Borussia Monchengladbach and Wolfsburg qualified for the Europa League in fifth and sixth.

FC Nuremberg and Hannover were relegated, while Stuttgart face a play-off against Union Berlin. Their top-flight status hangs in the balance after the first leg finished 2-2.

Another formality for PSG, who finished 16 clear of second despite regularly dropping points after wrapping up the title in March. Kylian Mbappe’s stratospheric rise continued as he finished top scorer with 33 goals.

They’ve swept up the domestic cups in recent seasons, but they missed out on the Coupe de France after losing the final on penalties to Rennes and they exited the Coupe de la Ligue early, which was eventually won by Strasbourg.

Lille, who battled relegation after sacking Marcelo Bielsa last season, were the runners-up and Lyon finished comfortably in third. In fourth, Saint-Etienne made the Europa League ahead of Marseille.

Monaco finished just two points clear of the bottom three in the end. Guingamp and Caen were relegated, while Dijon must play a relegation play-off against Lens.

Were it not for Lucas Moura’s hat-trick for Tottenham, Ajax would be going for a historic treble. Their latest golden generation won both domestic competitions, ending a five-year trophy drought and sparking ecstatic celebrations in the Dutch capital.

They were pushed all the way in the league, though. PSV finished just three points behind with a relentless pace at the top and will go into the qualifiers for the Champions League, while Feyenoord and AZ Alkmaar qualified for the second-tier European competition.

NAC Breda finished bottom and Excelsior will join them on the way down, having lost the relegation play-off to RKC Waalwijk.

Benfica reclaimed the title from Porto, finishing two points ahead at the top. The champions will straight into the group stage, while Sérgio Conceição’s runners-up going into the qualifying round.

Sporting finished third and won the Taça de Portugal by beating the champions on penalties in the final. Braga and Vitória de Guimarães could join them in the Europa League, as they go into the qualifiers.

At the other end, Feirense, Nacional and Chaves were relegated.

Giants Galatasaray retained the title but were made to work for it as Istanbul upstarts Başakşehir spent the majority of the campaign in the top spot. Eventually, they squandered the chance for an upset and saw their rivals lift the trophy on the penultimate weekend after they lost 2-1 to them.

Still, Başakşehir go into Champions League qualification. Beşiktaş have to settle for the Europa League and could be joined by Trabzonspor and Yeni Malatyaspor, as the last of the big three Fenerbahçe missed out altogether.