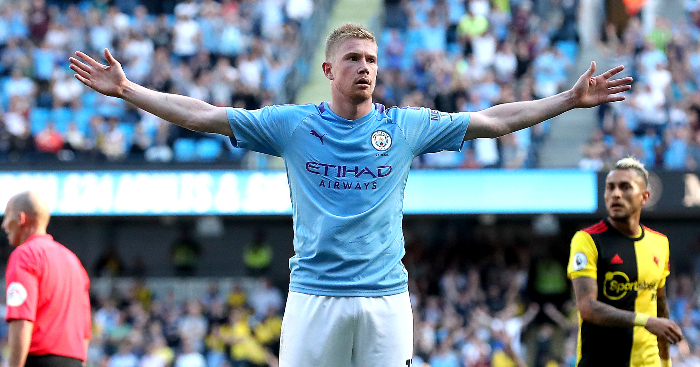 Genuinely top-quality creative players are difficult to find in the modern era, but the art of threading a defence-splitting pass certainly isn’t dead altogether.

Looking through the data on WhoScored, we’ve picked out the top 10 players who makes the most key passes per 90 minutes in Europe’s top five leagues, filtering out any players that have played fewer than 900 minutes so far this season.

A key pass is defined as the final pass before a team-mate takes a shot. Note: this article was last updated on July 29.

Despite being 32 years old, the Atalanta forward has still scored 15 goals and registered five assists in Serie A so far this season.

The fact a Norwich City player is the joint-10th most creative player in Europe’s big five leagues while the Canaries were relegated from the Premier League does not reflect well on their ability to actually put the ball in the back of the net.

Buendia does have seven assists to his name at least.

A 1-1 draw at high-flying Leicester back in December, thanks in part to our creative duo combining once again! 👏 pic.twitter.com/zoivAJHmNt

After starting 2019-20 by making two substitute appearances for Monaco, this Traore was sent on loan to Metz for the season, where he has scored once and provided four assists in 15 appearances while offering a regular creative outlet to a side that finished 15th in Ligue 1.

After starting just eight Serie A games in his first season at AC Milan, Castillejo has proved one of the most creative players in the division in 2019-20.

With over three chances created for team-mates per 90 minutes, he can perhaps feel aggrieved he only has two assists.

Despite being a talismanic figure for Atalanta in recent seasons, Gomez might be one of the most underrated players in Europe.

The Argentina international has provided an incredible 16 assists in Serie A this season, plus seven goals.

A player whose creativity sometimes goes unappreciated, Muller contributed a hefty 21 assists for Bayern in the Bundesliga in 2019-20.

He’s also chipped in with eight goals, giving him 29 direct goal contributions from only 26 league starts.

Only Lionel Messi provided more assists in Europe’s big five leagues than Di Maria’s 108 in the 2010s. Do we appreciate enough just how good he is?

Nkunku was linked with Arsenal before joining Leipzig from PSG last summer, and the Gunners – along with plenty of other teams – are sure to have been keeping an eye on his progress since.

The 22-year-old bagged five goals and 13 assists in his first Bundesliga campaign.

After topping the list in 2017-18, Payet finishes in second place for the second consecutive year.

The France international also ended the 2010s having created more chances in Europe’s big five leagues than any other player, finishing the decade on 974, 58 ahead of nearest challenger Mesut Ozil.

Only two players created 900+ chances in Europe’s top five leagues in the 2010s:

After an injury-hit 2018-19, De Bruyne was back to his best this season and, despite Liverpool’s dominance, is arguably back to being the best player in the Premier League (let’s not get into that here).

Thirteen goals and 20 assists certainly adds weight to that argument.