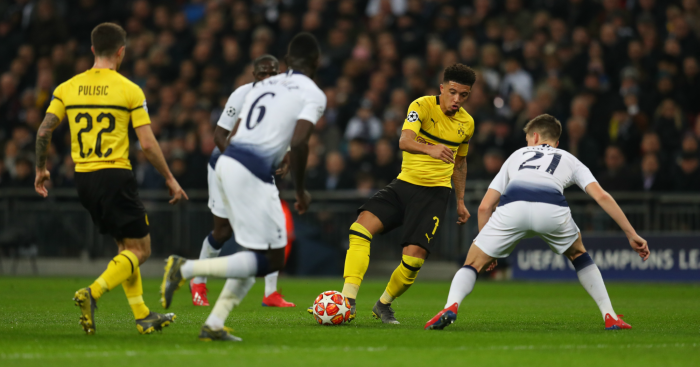 The ability to beat your moment with skill or sheer pace will never cease to be important in football – and these are the players who’ve done it most in Europe in 2018-19.

We’ve ranked players from the five major European leagues – the Premier League, La Liga, Serie A, Bundesliga and Ligue 1 – based on the number of dribbles completed on average per 90 minutes.

However, we’ve restricted it to those who have played a minimum of 1000 minutes in their respective league, ruling out Adama Traore (6.5), for example, with only 896 minutes across the season…

A surprise leader perhaps, Southampton fans will be all too aware of what he is capable of.

Best known in the Premier League for that wonder goal at home to West Brom, Boufal joined Celta Vigo on loan for 2018-2019 and has clearly been a useful player across the campaign.

However, he has not always had the end product to match his dribbling skills, registering only three goals and three assists for a team who finished only one place above the relegation zone in La Liga.

Having gone the entire 2017-18 season without making an appearance for PSG, Ben Arfa has had a rather more productive 2018-19 campaign with Rennes, helping them win the Coupe de France in April.

Another scorer of an iconic Premier League goal, for Newcastle against Bolton in 2012, Ben Arfa was Rennes’ third top scorer in Ligue 1 with seven, but his many dribbles only led to two assists.

Another Frenchman in the top 10, Sassuolo’s Jeremie Boga has come a long way since his first-team debut for Chelsea in 2017.

Having come through the Blues’ academy, the Ivorian had loan spells at Rennes, Granada and Birmingham City prior to his permanent transfer to Sassuolo for around £3.5million in 2018.

But sticking to the theme at the top of the list, Boga has contributed only three goals and a solitary assist this season for the Italian club.

Neymar missed a large chunk of the season through injury but still finished the season with 21 goals and nine assists from his 25 appearances for PSG.

He is sometimes accused of needless showboating, but unlike some of the other players on the list, Neymar has backed it up with an end product, albeit for the admittedly almost all-conquering French champions.

Januzaj has also suffered an injury-affected campaign, but he certainly hasn’t been afraid to take the game to the opposition when fit, completing an average of 4.7 of the 7.5 dribbles he has attempted per 90 minutes in La Liga.

The former Manchester United man is another who’s struggled to translate it into meaningful numbers, however, contributing only one goal and three assists in the league.

He may be only sixth on this list, but Messi has once again been operating on a completely different level to most of his peers this season.

He once again finished as top scorer in La Liga, winning the European Golden Boot, and also topped the charts for most assists, total shots, shots on target, chances created, big chances created, fouls won in final third, goals from outside the box, goals from free-kicks, braces and hat-tricks.

He is a phenomenon.

Saint-Maximin isn’t as well known as some of the other players on this list, but the Nice winger finished in the top 10 on this list last season and has done it again this time around.

The France Under-21 international has also doubled his goal tally in Ligue 1 from three last season to six this term, and also contributed three assists.

Unsurprisingly, it has not gone unnoticed elsewhere in Europe, with Premier League teams reported to have been monitoring his progress ahead of the summer transfer window.

The only Premier League player on the list – for now – Hazard has enjoyed another terrific season with Chelsea, contributing a hugely impressive 16 goals and 15 assists in the league alone.

With an average of 4.2 successful dribbles per 90 minutes from 6.3 attempted, clearly, there are not many defenders capable of stopping him in his tracks.

Sancho has been the talk of Europe this season, lighting up the Bundesliga and impressing abroad like no Brit has done for some time.

And alongside Hazard, he is one of few players across the major leagues to finish the season in double figures for both goals and assists with 12 and 14 respectively in the Bundesliga.

Now with an estimated market price of over £80million and a list of suitors as long as your arm, Dortmund could be in for a tasty profit if they decide to cash in on their free transfer this summer.

The fourth Ligue 1 player to make the top 10, Atal has actually made the majority of his appearances for Nice this season at right-back or as a defensive right-sided midfielder.

That makes the 23-year-old’s dribbling numbers all the more impressive, but it is his six goals – the joint highest in the Nice squad along with Saint-Maximin – that is sure to have clubs around Europe enquiring about his availability this summer.