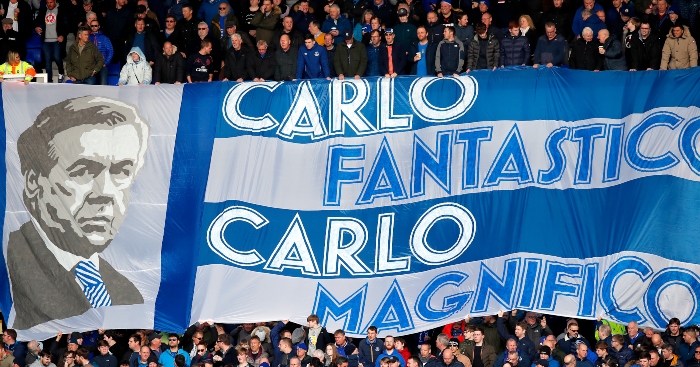 Not content with winning the transfer window and topping the early Premier League table, Everton are dominating Twitter with their Spirit of the Blues memes.

The song, recorded in 1984, recently topped the iTunes singles chart and has become the inspiration for dozens of sensational online videos. After years of mediocrity, it is no surprise that Evertonians are celebrating their surprising early-season success with the delirium of lottery winners.

Here, we’ve collected some of our favourite memes that this craze has spawned:

This clip, with the song posted over Coldplay’s ‘Adventure of a Lifetime’ video, was believed to have started the trend back in early September.

Once the team defied expectations and started the season on fire, the memes began to explode with popularity. That look on Morgan Freeman’s face is one of approval.

Back to the Future

Everton being top of the league is fitting considering society increasingly resembles the 1980s. Here, Marty puts his heart and soul into belting the anthem.

Rocky Balboa has visited Goodison Park in the past so its only natural he has been utilised here.

John Travolta is a Blue and there’s no reason to argue otherwise.

It would have been weird if Steve Coogan’s much-loved character was not included, given the liquid football Everton have been playing.

TOP OF THE LEAGUE

Nobody would have pegged Miley Cyrus as a Toffee, but the blue swimwear sported here suggests otherwise.

With their record for predicting the future, is it any surprise Springfield’s finest foresaw the rise of our new Evertonian overlords?

We hope we’re not too late to the party.. #EFC #Spiritoftheblues pic.twitter.com/uTv3yXrPSJ

Not even this banger can make the former Prime Minister’s dance moves look cool.

Whereas the shapes thrown here by Stiffler are timeless.

Mark Lawrenson might still believe there’s mileage in the ‘…not’ joke, but this video demonstrates the continued relevance of the classic film.

Even MJ is getting in on the act.

After this meme has done the rounds all year, nobody should be surprised that El Diego has busted some moves to this Everton classic.

Loving these Spirit Of The Blues dancing clips 😂😂

Who ever does them, Top work

Pick of the bunch is this Maradona one 👏👏 #EFC #SpiritOfTheBlues #Toffees pic.twitter.com/CXKUL6ZhUe