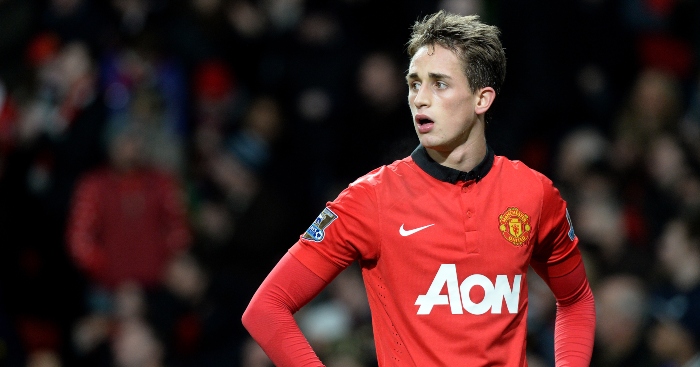 Manchester United are renowned for producing talented young players – but not all of their academy graduates make the grade.

Plenty of players have gone on to establish themselves as first-team regulars after rising through youth ranks, but how do those players fare who benefit from that same upbringing but leave Old Trafford much earlier in their careers?

We’ve taken a look at every player from their reserves that they’ve sold or received a compensation fee for over the past five years.

Lawrence was given his United debut by caretaker manager Ryan Giggs in 2014 but signed for Leicester City just a few weeks later.

During his three year stint at the Foxes, he made just four first-team appearances before joining Derby County for £7million in 2017.

The midfielder impressed for Derby and Wales but recently hit the headlines for all the wrong reasons after pleading guilty to drink-driving.

Welbeck was a popular figure at United, but Louis van Gaal deemed him surplus to requirements at Old Trafford and was shipped off to rivals Arsenal.

The striker had a strong start to life at the Emirates and won the FA Cup in 2017, but injury problems plagued his five years at the club.

After his contract expired at the end of last season, Welbeck signed for Watford on a free transfer but has made just six first-team appearances in 2019-20.

Vermijl only played two games for United’s first team and his last appearance was in a 4-0 loss at MK Dons in the League Cup.

The defender then dropped into the Football League with spells at Sheffield Wednesday and Preston before signing for Dutch second division side MVV Maastricht in 2019.

Like Vermijl, Keane was another casualty from the MK Dons game and the defender was soon shown the door by Van Gaal,

“After that, I was on international duty with the Under-21s. It was transfer-deadline day and I got a phone call saying Burnley wanted to take me,” Keane told the Guardian.

“It was a bit harsh, judging me on one game, but I suppose when you are coming through at Man United you know if you get that chance you need to take it.”

The 27-year-old proved his doubters wrong at Turf Moor and earned a £30million move to Everton in 2017.

Grimshaw was compared to Gary Neville and John O’Shea when he was the captain of United’s academy, but he never got an opportunity in the first team.

After a difficult time at Preston, the midfielder signed for Motherwell in 2017 and has become an ever present in their starting line-up.

Pearson worked his way up through the youth ranks at United and became a stand out player in their reserves.

However, he failed to make a senior appearance for the club and joined Preston in search of regular first team football.

The midfielder has since established himself as one of the best midfielders in the Championship, although he also has an awful disciplinary record.

United have made a few mistakes in the transfer market over the last few years but replacing Evans with Marcos Rojo is right up there.

Evans won three Premier League titles during his nine years at Old Trafford, but was sold by Van Gaal after a few mistakes in the 2014-15 season.

The 31-year-old got his career back on track at West Brom and has now formed a brilliant defensive partnership with Caglar Soyuncu at Leicester City.

No not that one.

James scored twice as United beat the LA Galaxy 7–0 in a pre-season friendly in 2014, but the 26-year-old made just one competitive appearance for the club.

After loan moves to Carlisle, Rotherham and Huddersfield, the defender joined Wigan in 2015 and now finds himself at Doncaster Rovers.

Henriquez arrived at United from Universidad de Chile with a lot of potential and won the FA Cup during a loan spell at Wigan in 2012-13.

The striker spent most of his United career out on loan and never played a single minute for the first team before being sold in 2015.

Henriquez had spells with Dinamo Zagreb and Atlas but has now returned to former club Universidad de Chile.

An injury crisis in defence presented Blackett with an opportunity in United’s starting XI, but he wasn’t the answer to their problems.

The 25-year-old had an unsuccesful loan at Celtic, but joined Reading in 2016 and has made 114 appearances for the Championship side.

However, Blackett’s contract expires in the summer, and he has been linked with Turkish giants Fenerbache.

Tyler Blackett has rejected the offer of a new contract from the club and is likely to leave Reading in the summer. [@berkshire_live] #readingfc pic.twitter.com/J1td41eaN6

Keane was a highly-rated prospect at United after scoring regularly for their reserves but a knee ligament injury halted his progress and derailed his career.

“A lot of football is timing, isn’t it? Being in the right place at the right time,” Keane told the Manchester Evening News.

“It’s been hard for me because I’ve had a few big long-term injuries. Even when I have played, it’s been quite stop-start.”

The striker has endured a difficult few years since leaving United but looked for a fresh start by joining Ipswich Town in 2019.

Weir made his United debut in 2016, coming on as an injury-time substitute for Ander Herrera in their 3-2 win over Arsenal.

That proved to be his first and last appearance for the Red Devils, as he joined Hull City at the end of that season.

Weir is now at Bolton but was recently criticised by his manager and subbed off in the first half of their EFL Trophy game against Manchester City’s reserves.

The midfielder was taken on a senior pre-season tour by Van Gaal but started to outgrow reserves football and joined QPR in 2017.

“Leaving was tough. It had been ongoing for a while,” Goss told the Manchester Evening News.

“I got back fit after my back injury and there were discussions about me signing a new contract at United, but I thought with the opportunity to come to QPR and get first-team football I couldn’t really turn it down.”

Goss then had loan spells in Scotland with Rangers and St Johnstone before joining Shrewsbury Town on a permanent deal.

Love made just two appearances for United’s first team and suffered a defeat on both occasions.

David Moyes took the defender to Sunderland, but he struggled to establish himself at the Stadium of Light as they back-to-back relegations.

After being released by the Black Cats, Love reunited with Goss at Shrewsbury but recently scored an own goal in the FA Cup tie against Liverpool.

Nightmare start to the second half for Shrewsbury Town 😶#EmiratesFACup #SHRLIV pic.twitter.com/Q7zrm8av6v

McNair was another young defender who was unexpectedly given a chance in the first team by Van Gaal and the manager had high hopes for him.

“McNair has developed himself very good and now we are giving him the chance to develop as a right wing back,” Van Gaal.

“Maybe he can be right-back for Man United for the next ten years. You never know.”

We soon found out the answer as McNair was sold to Sunderland in 2016 and is now playing for Middlesbrough in the Championship.

Reid joined Swansea City in 2017 but made just one appearance for the Welsh side before being sold to Swindon Town.

The defender is currently on loan to Wrexham in the National League.

Varela was David Moyes’ first signing at United but was eventually given a chance by Van Gaal, making 11 appearances in 2015-16.

The defender was sent on loan to Eintracht Frankfurt for the following campaign but was told to go back to United when he suffered an infection after getting a tattoo against orders.

Varela returned to his native Uruguay with Penarol before signing for FC Copenhagen in 2018.

Januzaj was tipped to be the next big thing at United after his breakthrough season under David Moyes in 2013-14, and the winger inherited Ryan Giggs’ number 11 shirt.

However, the Belgian failed to live up to expectations and fell out of favour under Van Gaal and Jose Mourinho.

“I didn’t really get a chance because at the time he [Mourinho] probably wanted more experienced players with names,” he told Sky Sports News.

“I always knew I had the quality to play for Manchester United. I know what I am capable of.”

Following a disastrous loan spell with Sunderland, he’s revitalised himself at Real Sociedad and has recently been linked with a move to Roma.

Adnan Januzaj with a beauty of a goal for Belgium vs England. “I wanna tell you, I might as well do about a boy who can anything” 🎶 pic.twitter.com/BU9kAfUB41

Harrop made just one appearance for United but it was one to remember, as he scored on his Premier League debut against Crystal Palace in 2017.

But the winger then rejected a new contract and left his boyhood club, joining Championship club Preston North End.

The 24-year-old has had a stop-start time career at Deepdale due to injury problems but has scored eight goals in 23 appearances this season.

Williams was a stalwart of United’s Under-23s and regularly captained the side, but the centre-back never played for the first team despite making the bench twice under Van Gaal.

He joined Leagie One side Shrewsbury Town last year in search of regular first-team football and the 21-year-old has established himself as a regular in their defence.

Johnstone was part of the talented Under 18’s side that included Paul Pogba and Jesse Lingard and won the FA Youth Cup in 2011.

However, his path to the first team was blocked by David de Gea and Sergio Romero so the goalkeeper had several loan spells in the Football League.

The 26-year-old sealed a permanent move to West Brom in 2018, and he has become a regular in a Baggies side that are challenging for promotion.

The youngster starred for United’s reserves and was tipped to have a bright future but left for Celtic in 2019 after failing to break into the first team.

“It was a tough decision to leave, but at the end of the day, it has to be purely about football and what’s best for my career and I think I made the right decision,” O’Connor said.

“I had an amazing three-and-a-bit seasons at United. I couldn’t speak highly enough about the club, the people at it, the players, everyone. But I think it was time for me to move on and everyone at the club understood that.”

The 19-year-old is yet to feature for Celtic’s first team and recently joined Partick Thistle on loan.

Burkart arrived at United from FC Zurich in 2014 and never made a first-team appearance, but he scored six times from 12 starts for the under 23s last season.

The striker joined SC Freiburg in the summer for an undisclosed fee and the 19-year-old has scored one goal in 14 appearances for their reserve team.

The past seven players Manchester United signed from the Football League