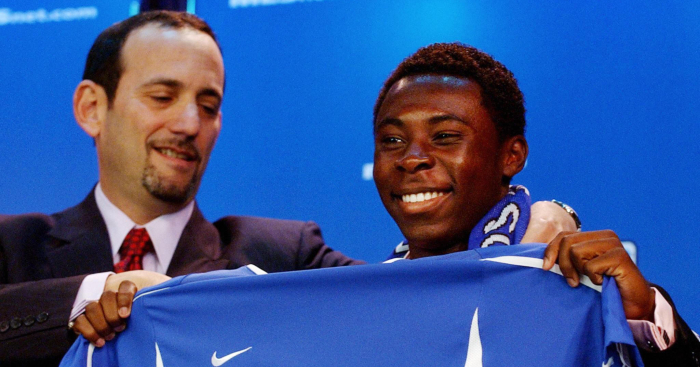 Freddy Adu became one of the most-hyped footballers in the world when he was the first pick at the draft for MLS in 2004 – but how have subsequent first picks fared?

Adu was just 14 when he was picked by DC United but failed to live up to his early promise and embarked on a nomadic career.

We’ve taken a look at every player to be picked first in the draft since to see if their careers have followed a similar path.

Besagno became the second consecutive player to be picked from the IMG Academy after Adu, joining Real Salt Lake, and was the second youngest player in the competition’s history to be drafted.

But the midfielder made even less of an impact than Adu, playing just eight times over three years before being released and failing to secure another professional deal, instead dropping into the USL Premier Development League.

The son of a former Major League Baseball player, Wynne could have forged a career in athletics, having run 100 metres in 10.39 seconds in his senior year of high school.

After being picked first by the New York Red Bulls – then known as the MetroStars – Wynne established himself in MLS and enjoyed an 11-year career, winning the title with Colorado Rapids and earning five USA caps.

Edu proved a success for Toronto, ending his debut MLS campaign as Rookie of the Year and breaking into the USA senior set-up. Such was his promise, he even got to feature on the cover of FIFA 09 alongside Ronaldinho.

Those performances attracted the attention of clubs in Europe, and Edu joined Rangers in 2008, winning three consecutive titles and scoring a memorable 93rd-minute winner in an Old Firm derby.

A move to Stoke City followed, but Edu made only a 10-minute cameo appearance before being loaned to Turkey, eventually returning to MLS with Philadelphia Union.

He retired in 2019 after two years without a club due to serious injuries.

Maurice Edu scores vs Celtic for Rangers back in 2010 to take a giant leap to another Scottish title. A camera shaker, rare scenes!#RangersFC #WATP #CelticFC pic.twitter.com/ruVIb1DDoN

Wonderfully named and excellently coiffured, Myers was signed by Kansas City Wizards and spent eight years with the side, scoring a penalty in the shootout win over Real Salt Lake in 2013 MLS Cup final.

Still only 31, the full-back has been without a club since leaving Portland Timbers in 2018.

Chance would be a fine thing.

Born in Zaire but raised in London, where he was part of Arsenal’s youth set-up, Zakuani moved to America after joining the University of Akron on a soccer scholarship.

The forward rejected offers to return to England when picked by Seattle Sounders, helping the side win the US Open Cup in their inaugural season, an honour they retained the following year.

After four years with the Sounders, Zakuani moved to rivals Portland Timbers but retired after a solitary campaign at the age of 26 due to the problems caused by a horrific leg break earlier in his career, which ultimately required nine operations.

Steve Zakuani and it would take me 100s of words https://t.co/PXXUB1a0C2

Despite being among the nominees for Rookie of the Year after his first season with Philadelphia Union, Mwanga is yet another player on this list without a club, despite being just 28.

Salgado courted plenty of controversy as a teenager when he left Chivas after switching international allegiances from Mexico to the USA.

As a youngster, the forward trained with both Everton and Fulham but was selected by Vancouver Whitecaps as first pick in 2011.

Salgado failed to establish himself at the Whitecaps and was traded to New York City, only to be immediately sold to Mexican outfit Tigres UANL, where he similarly failed to appear.

The 25-year-old spent 2019 season in the second tier of US soccer after becoming the first player to be signed by new side El Paso.

Wenger spent eight seasons in MLS – operating as a forward, midfielder and defender for three different clubs – but retired at the end of 2018 aged just 28.

He secured his place in the history books by scoring the winner to give Montreal Impact their first ever victory against Toronto.

The defender has remained with New England Revolution since being picked by the side in 2013, nailing down his place as a regular in the side and appearing for MLS All-Stars against Arsenal in 2016.

Blake was expected to become Philadelphia Union’s first-choice goalkeeper following his selection but had to bide his time until breaking through in 2016, when he appeared for MLS All-Stars and was named Goalkeeper of the Year.

The stopper has also won the Carribean Cup with Jamaica in that time.

The Canada striker spent three productive seasons with Orlando City before moving to Besiktas in January 2018.

Larin is yet to become a regular in the Turkish side’s starting XI and is now on loan at Belgian club Zulte Waregem.

Harrison joined Chicago Fire but was immediately transferred to New York City, where he attracted plenty of attention as a young Englishman impressing in the Big Apple.

The winger has since moved back to England by joining Manchester City, where he has been loaned out to Middlesbrough and Leeds United.

After an inconsistent first season at Elland Road, he has shone under Marcelo Bielsa’s tutelage in 2019-20, with Leeds expected to take up their option to make the deal permanent.

Danladi finished his debut campaign with Minnesota United as MLS Rookie of the Year runner-up, only for injuries to disrupt his second season.

Ahead of the 2020 campaign, he joined expansion side Nashville SC.

No, not that one. The defender helped the newly-formed LAFC finish third in the Western Conference in their inaugural season but lost his place in the side towards the end of the campaign and was on the bench for the 3-2 play-off defeat to Real Salt Lake.

At the end of that campaign he was traded to Orlando City.

Amaya made history as the first player born in the 2000s to be picked first in MLS’ draft.

The attacking midfielder, 19, joined expansion side FC Cincinnati made 19 appearances in his debut campaign but is still searching for his first goal or assist in the league.

Picked by David Beckham’s side Inter Miami, the 21-year-old has already faced criticism for needing to bulk up, although he has taken everything in his stride.

“They want you to succeed and think you have that potential,” he told MLSsoccer.com. “I think he (coach Diego Alonso) sees that in me and is pushing me really hard. I thrive under that.”