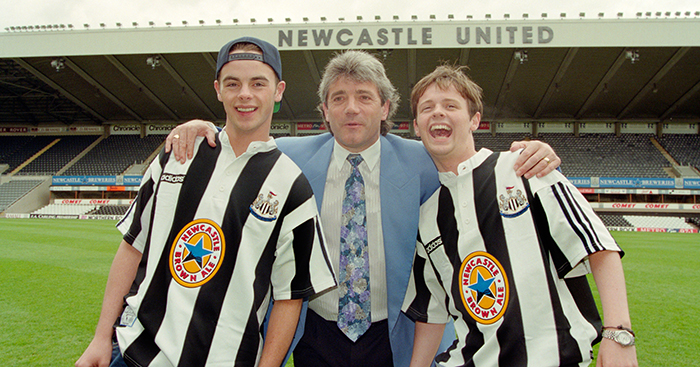 Every club has its share of good and bad supporters. But which celeb is your team’s coolest fan?

Fans make football what it is. From passionate renditions of ‘You’ll Never Walk Alone’ to elaborate tifo displays on the continent, those in the stands are the lifeblood of the sport.

Some fans, however, are more notable than others.

Every Premier League club has its own troupe of celebrity supporters, ranging from British royalty to American presidents. There are good ones, bad ones and — occasionally — pretty cool ones.

These are the top dogs at every PL side.

Until Arsene Wenger’s departure this year, Arsenal fans had found themselves divided.

One group, the loyalists, wanted to preserve the status quo. They urged others to keep faith in an ageing ruler, favouring respect and conservatism while turning a blind eye to reality.

The other group demanded revolution.

In many ways, Queen Elizabeth (a monarch) and Jeremy Corbyn (a republican and socialist) epitomise the ‘Wenger In’ and ‘Wenger Out’ schism as well as anyone.

As to which Arsenal fan is cooler, it’s just too close to call.

First met Wenger in '96 with my sons as he walked into Highbury. Thanks for the league titles, FA Cups & beautiful football #OneArseneWenger

Oh, we’re at the bottom of the barrel already.

Canadian comic Seth Rogen isn’t especially cool, but his allegiance to Bournemouth — made so after he appeared on Soccer AM — seems fitting.

In fact, he looks no less like a footballer than most of Bournemouth’s defence. Smith, Cook, Rogen, Francis, Daniels? It could happen.

Cool in a wondering if this piece could be non-alphabetical to push Des Lynam’s name further down the page kind of way.

No, that’s not fair. Jimmy Anderson, a proud Burnley fan, is one of the best bowlers in the world’s coolest sport: cricket.

Roald Dahl (1916-1990) once immortalised Cardiff City in his book The Twits, in which Neil Warnock hides worms in Aron Gunnarsson’s spaghetti and the Icelander put frogs in his manager’s bed.

That’s not true, but the author did recount his early Cardiff experiences in the autobiographical More About Boy.

“It was thrilling to stand there among those thousands of other men cheering our heroes when they did well and groaning when they lost the ball,” he wrote.

“We knew all the players by name and to this very day I can still remember the names of three of them.”

“[Chelsea] kind of have the reputation for being the Yankees of the Premier League,” he admitted. “They have a bunch of money behind them and they’ll pay for the best players, but the best team in any sport across the world will do what it takes to get the best players.”

Tony Bellew is also a noted Toffee, but if there’s anything cooler than boxing, it’s pretend boxing.

Sylvester Stallone has supported Everton for more than a decade, and revealed he had the chance to buy the club in 2007. Funnily enough, Bellew actually appeared alongside him in the 2015 film Creed, which was part of the Rocky franchise.

Well it’s not Michael Jackson, is it?

Our lads, our team, our Club-@htafcdotcom Welcome to the Premiership, you marvels. pic.twitter.com/eMtahX8vFW

Kasabian are so uncool I had to break my own rule of not including ex-players.

But Lineker’s alright, isn’t he? Scored 95 league goals for the club. Did the Walkers stuff. Presented Match of the Day in his pants. Cool guy.

Samuel L. Jackson became a Liverpool fan after shooting The 51st State in the year 2000.

“I shot a film there and had never been to a proper football game until I got to Liverpool,” he told the BBC in 2016. “That was like my first football experience, so that’s why I am a Liverpool fan.

“That was my introduction to football and I spent a lot of time in the stadium singing ‘You’ll Never Walk Alone’.”

Oh, so you can think of someone better, can you?

Well, ask yourself this: who is cooler, a couple of brothers from Burnage or somebody who has starred in not one, not two, but THREE Rush Hour films?

In 2012, Jackie Chan met up with the Man City squad, who successfully converted him into the world’s coolest Citizen.

A great guy and a real hero but still so humble, it was a pleasure to meet Jackie Chan!

Grime legend Stormzy is one of Man United’s coolest fans, and has even socialised with members of the team on a few occasions.

Upon meeting Wayne Rooney in 2017, the artist was particularly starstruck.

“Speaking to Wayne I was like ‘Oh my days!”‘ he revealed.

Brian Blessed was a real contender here, but Ant and Dec just get cooler and cooler. Despite their (nearly) squeaky-clean image, the TV duo clearly hate Mike Ashley, and this season tweeted their support of Rafael Benitez.

Southampton might be ‘walking away’ from the troubles of the Premier League, but at least they have R&B icon Craig David to cheer them into the Championship.

Given the obvious similarities between Patsy Kensit and Salman Rushdie, this one was too close to call.

Rushdie has had an actual death sentence hanging over his head since 1989, but Kensit was once married to Liam Gallagher.

Elton John became Watford chairman in 1976, and has been Watford’s coolest fan ever since.

The 44th president of the United States is a fan of Steve Lomas and the gang, having been introduced to the club by his London-based half-sister.

Star Wars actor Mark Hamill Became a Wolves fan after accidentally liking a tweet. You have to wonder if Rúben Neves did something similar.

When asked if I liked the"Wolves"I thought they meant the animal. But everyone got so excited-I HAD to be a fan-there's no turning back now!