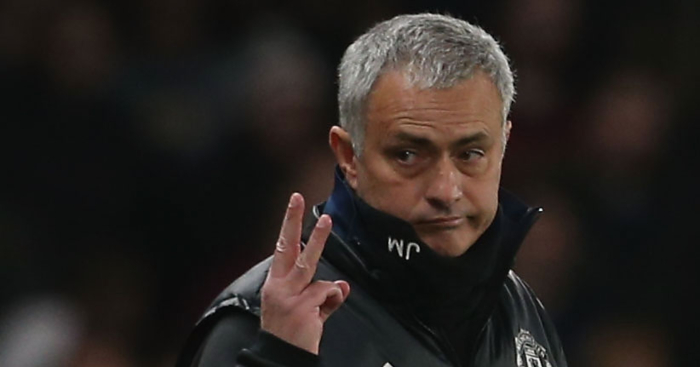 Manchester United visit Chelsea on Saturday in what will be only the fifth time Jose Mourinho has managed an opposition side at Stamford Bridge.

Mourinho’s future at Manchester United is under intense scrutiny, so it would give the Portuguese a huge boost if he were to secure a victory at his former club, who have started the season in eye-catching form under Maurizio Sarri.

We’ve taken a look at Mourinho’s record at Stamford Bridge when in charge of visiting sides.

In what will be a role reversal to this weekend, Mourinho was able to take United to west London looking to pile on the pressure on Chelsea’s manager, Antonio Conte.

Chelsea had kept just one clean sheet in their previous eight matches, with Conte responding by dropping David Luiz from the matchday squad entirely, opting for Andreas Christensen in the starting XI and Ethan Ampadou on the bench, while N’Golo Kante returned to fitness to start.

“[Mourinho’s] current team never showed any real control on this occasion, their few chances squeezed out on the break – until a late rally which threatened to earn them an equaliser they would not have merited,” wrote Dominic Fifield in The Guardian.

Mourinho, however, had a different view on the match. “It was an even match,” he said. “Both teams could win. The first to score would be in more defensive control and to win the match.”

Another unhappy return to his former home for Mourinho as he clashed with Conte on the touchline and supporters sang “you’re not special anymore” and “Judas” at the man they had previously adored.

Mourinho responded to Chelsea fans by holding up three fingers to represent the three titles he had won across two spells with the Blues. “Judas is No.1,” he said after the game.

Tensions on the sidelines mirrored those on the pitch as Ander Herrera was sent off in the first half and Conte accused United of “trying to intimidate” and “only kicking” the hosts, with Eden Hazard notably singled out.

And it was Chelsea who emerged victorious in this FA Cup quarter-final thanks to Kante’s goal five minutes into the second half.

Mourinho’s first return to Stamford Bridge since being sacked by Chelsea for a second time could not have gotten off to a worse start as Pedro opened the scoring after just 30 seconds.

The Red Devils were then thoroughly outplayed by a Chelsea outfit finding their groove in Conte’s 3-4-3 formation, with Gary Cahill, Eden Hazard and Kante adding further goals.

There were also early signs of the beginnings of Mourinho and Conte’s feud as the Portuguese spoke with the Italian at full-time, reportedly criticising the Chelsea boss for urging his supporters to make more noise after the fourth goal.

Sandwiched in between his two spells with Chelsea, Mourinho’s first experience as a visiting manager at Stamford Bridge was much happier than his future trips to west London.

Drawn with the Blues in the Champions League round of 16, Inter won 2-1 in the first leg at the San Siro, meaning Chelsea were still a dangerous prospect with Salomon Kalou’s away goal to their name.

Mourinho, however, was in bullish mood. “Mourinho does not lose at Stamford Bridge,” he said ahead of the second leg. “We can go there with a legitimate ambition to go through.”

And Inter produced an accomplished performance in the return fixture, clinching their passage to their quarter-finals – and an eventual Treble – as Samuel Eto’o scored with just over 10 minutes remaining.

The frustration of Carlo Ancelotti’s Chelsea was summed up when Didier Drogba was sent off in the 87th minute for a stamp of Thiago Motta.

“We deserve this victory, this must be an almost a perfect performance,” Mourinho said afterwards. “Chelsea had reactions of frustration, of a team that felt the opposition was stronger.

“They tried to get back with conflict, long balls and diving in the box but I think everything we did was superior.”