The 10 times Mauricio Pochettino has managed a team against Barcelona 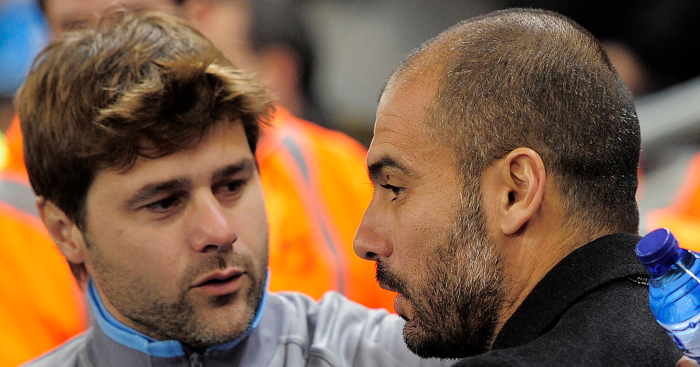 Managing Tottenham against Barcelona may be a relatively new experience for Mauricio Pochettino – but he had plenty of battles against the Catalan giants during his time in Spain.

In 2017, Pochettino famously said he would never manage Barcelona due to his allegiances with rivals Espanyol, who he represented as a player and a manager.

“I would prefer to work on my farm in Argentina than to go and work in certain places” summed up his attitude to Barcelona, and we’ve looked back at every time the Argentine has led a team against the Nou Camp outfit.

Pochettino had only been in the job for one day when Barcelona visited Espanyol for the first leg of the Copa Del Rey quarter-finals.

Espanyol were bottom of La Liga at the time, having won just four times all season, and Pochettino was their third manager of the campaign.

Such was the enormity of the challenge, Pochettino, with little experience to his name, hiked 12km to Montserrat and pleaded with the heavens for divine intervention to save his team.

The gods clearly to a liking to him. He managed to guide the side away from the relegation zone, and his first game in charge, against Pep Guardiola’s great Barcelona side, was also a success.

“My first training session had been on the afternoon before the game and then, we trained on the morning of it,” Pochettino told the Guardian in 2016. “It was two training sessions in less than 12 hours.

“I said to the players that we needed to play with high pressing and one-versus-one at the back. Their eyes were like this! They thought it was impossible against Barcelona but I said, ‘No, it is not impossible.’

“The 0-0 against Barcelona was a fantastic result and it was then easy to convince the players to play in a different way. Where did I get the idea we had to press them? It’s about your personality, who you are.

A week later and Pochettino was managing for the first time at the Nou Camp, having secured a 1-1 draw at Real Valladolid in between the two legs of the quarter-final.

Two goals either side of half-time from Bojan Krkic left Espanyol – with Steve Finnan wonderfully at right-back – facing an uphill task, and Gerard Pique appeared to have killed the tie with a third before Coro and Jose Callejon made things interesting with 20 minutes to go.

The first victory of Pochettino’s managerial career also happens to be one of his best results as a boss, and is came just one month into his tenure.

Barcelona, 10 points clear at the top of La Liga, were on their way to claiming a treble but were stunned at the Nou Camp as two goals in five second-half minutes from Ivan De La Pena were enough to secure all three points, despite Yaya Toure pulling one back with half an hour still to play.

“I don’t know how we did it,” Pochettino told Sky Sports. “Espanyol were bottom and Barcelona were top, and all the people were saying Espanyol were dead and had no chance. It was a special victory and an unbelievable memory.”

He later recalled: “This was the third or fourth game that I was in charge and I’d started to set a different style on Espanyol. The plan was to press high and to surprise them.

“I remember Barcelona had Ronaldinho, Eto’o, Henry, Yaya Toure, Abidal, Puyol and Iniesta, all in their prime, and they were surprised how we played.”

It was Espanyol’s first win at the Nou Camp for 27 years, and remains Pochettino’s only victory against Barcelona as a manager.

Espanyol enjoyed a much more comfortable 2009-10, finishing 11th in La Liga, while Barcelona again finished top of the pile.

But Barca against struggled against their city rivals, winning only thanks to Zlatan Ibrahimovic’s first-half penalty.

Coming just days before their trip to Inter Milan in the first-leg of the Champions League semi-finals, in which Barca were beaten 3-1 in one of many battles between Guardiola and Jose Mourinho, Espanyol held the league leaders to a stalemate in the first derby at Espanyol’s new stadium Cornella-El Prat, in which one-time Chelsea starlet Ben Sahar made a cameo off the bench.

While Pochettino guided his plucky underdogs of Espanyol to some creditable results against the might of Barcelona, he also suffered a few hidings.

Barcelona were once again on their way to winning La Liga and the Champions League, although Espanyol were also flying high in fifth at the time of the fixture.

But Barca asserted their dominance as Pedro and David Villa bagged braces alongside Xavi’s goal.

Espanyol’s only reply came from Dani Osvaldo, who was thankfully still in his football, rather than his singing, phase.

Barcelona came into the game off the back of a 1-1 draw with Real Madrid which booked their place in the Champions League final, but still had work to do to secure the La Liga title.

Espanyol, meanwhile, were cruising in eighth with little to play for as goals from Andres Iniesta and Gerard Pique wrapped up a comfortable win for the hosts.

The result left Barcelona five points behind Real Madrid in the title race.

A game which marked Guardiola’s final match in charge of Barcelona at the Nou Camp was dominated by a certain Lionel Messi, who scored all four goals, as Pochettino had to watch on as a mere footnote to a bigger story.

Six years on from Pochettino’s last meeting with Barcelona, and he was once again left to rue the genius of Messi, whose two second-half goals capped off an other-worldly display and punctured a spirited Spurs fightback from 2-0 down.