Every time Unai Emery has managed a team against Jose Mourinho 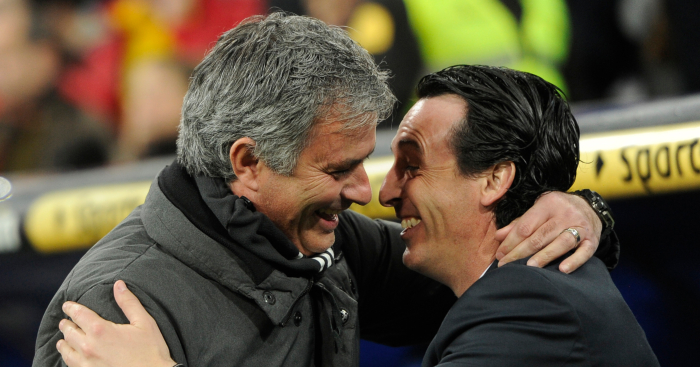 Unai Emery and Jose Mourinho will lock horns in the Premier League for the first time on Wednesday when Arsenal travel to Manchester United.

Emery has made an excellent start to life at Arsenal, summed up by their thrilling 4-2 victory over Tottenham in the north London derby, while Mourinho’s future at Old Trafford is in serious doubt after a miserable start to the season.

However, this won’t be the first time the two managers have faced each other, and we’ve taken a look back at their clashes in Spain.

Mourinho’s arrival as Real Madrid boss allowed Emery, who was by this point in his third season in charge of Valencia, to test himself against one of the biggest names in the game.

Valencia had to contend with the departures of David Villa and David Silva in the summer, whereas Real could afford to sign the likes of Angel Di Maria and Mesut Ozil.

But Los Blancos struggled to break down the visitors, taking until the last 20 minutes before Cristiano Ronaldo finished after a neat through ball from Ozil.

Ronaldo added a second with four minutes to play with an excellent solo goal on the break, dribbling from just inside his own half to fire home – albeit with the help of a Valencia defender falling over.

Now we’re talking. A nine-goal thriller which saw Real Madrid close the gap on Pep Guardiola’s Barcelona in the title race only three days after beating their fierce rivals to lift the Copa Del Rey.

Mourinho opted to rotate his squad with another meeting with Barcelona, in the Champions League semi-finals, on the horizon, meaning the likes of Cristiano Ronaldo, Xabi Alonso, Mesut Ozil, Pepe and Marcelo all started on the bench, while there were starts for Esteban Granero, Sergio Canales and Ezequiel Garay.

But that didn’t stop the visitors powering into a 5-0 lead as Gonzalo Higuain bagged a hat-trick alongside goals from Karim Benzema and Kaka.

But Emery’s side, featuring Manchester United’s Juan Mata and Leeds United’s Pablo Hernandez, refused to throw in the towel as Jonas and Jordi Alba continued the madness.

Remarkably, Mourinho would be involved in a similar fixture when he returned to England three years later, as his Chelsea side won 6-3 at Everton in an equally-ludicrous encounter.

Making it 14 goals in the previous two encounters between the two sides, Real Madrid were on their way to overcoming Pep’s Barcelona to become La Liga champions, while Valencia continued to cement their status as the third best team in Spain, despite having now also lost Juan Mata to Chelsea.

Emery’s side had made an excellent start to the season, losing just once – against Barcelona – in their opening 11 La Liga fixtures, while Madrid had dropped points just twice and were coming off the back of a 7-1 thrashing of Osasuna.

The clashes between the two clubs were now developing into a fierce rivalry. Valencian newspaper Super Deporte dubbed the game “soldiers against mercenaries”, placing a target on Cristiano Ronaldo’s head on their website.

El País went for “legends against giants”, while Valencia themselves stoked passions by encouraging fans to carry the Senyera, the flag of the Valencian community.

In a fiery encounter at the Mestalla, 10 players in total were booked, and Jose Mourinho called Jordi Alba a “clown” during a heated confrontation on the touchline.

During the football itself, Valencia came painfully close to pulling off a remarkable comeback.

Karim Benzema had given the visitors a slender half-time lead with a brilliantly-taken goal from a quick free-kick, and Sergio Ramos doubled their advantage in the 72nd minute, kickstarting a frantic 10-minute period.

Roberto Soldado pulled one back three minutes later, only for Ronaldo to make it 3-1 on 79 minutes after a gaffe from goalkeeper Diego Alves.

Again it was Soldado, so potent in comparison to his spell in the Premier League, who dragged Valencia back in the game, but they could not find an equaliser in the remaining seven minutes – despite having a goal ruled out for offside, a panicked goalmouth scramble, a controversial decision not to award a penalty and a shot which cannoned off the crossbar.

This was a proper belter.

The scoreline may suggest something of a damp squib in comparison to the two previous encounters, but it could, and perhaps should, have finished 3-3 or 4-4 as both sides missed a host of big chances.

What is the only time Emery has managed to steal a point of a Mourinho-managed side, it would be the last time Real Madrid dropped points before they won their final seven league matches to romp to the title with 100 points.

Valencia, meanwhile, were beginning to run out of steam and were lacking the finishing touch of Roberto Soldado (stop laughing, Spurs fans).

They went on to win four and lose three of their remaining fixtures in a bizarre run which featured three 4-0 wins and a 4-1 defeat.