The nine youngsters to have played under Unai Emery at Arsenal 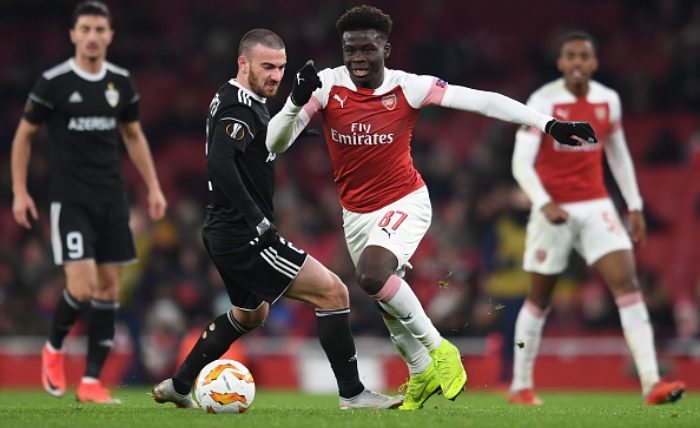 Arsenal extended their unbeaten run to 22 games this week as they beat Qarabag 1-0 in the Europa League.

While it was Alexandre Lacazette who got the only goal of the game, Unai Emery utilised several youth team players in his side, including some who were making their full debuts for the club.

And we’ve run down every Arsenal player aged 21 or under who Emery has called upon so far.

This curly haired Frenchman has already made a big impression at Arsenal. His carefree attitude and competence beyond his years have earned praise from all quarters and he looks to be great signing at £7million from Lorient.

Guendouzi scored his first Arsenal goal away at Qarabag in October and has already made 20 appearances for the club.

An academy graduate with great promise, Smith Rowe has shone in his first team appearances so far with three goals in six games. In September he became the first Arsenal player born in the 2000s to play for the club.

Emery is a big fan and heaped praise on him after Arsenal’s 3-0 win away at Vorskla Poltava. “He is taking confidence, he is taking responsibility and also I think today his performance in 90 minutes is very good,” he said. “He is a good example for the other young players”.

Another academy graduate, Maitland-Niles started in Emery’s first game at Arsenal against Manchester City but was forced off with an injury after 35 minutes.

Now back to full fitness, Maitland-Niles has featured in the Europa League and will be looking to re-establish himself, having broken into the first team towards the end of Arsene Wenger’s tenure.

Having made his full Premier League debut against Newcastle last season, Willock has continued to hover around the first team under Emery.

He is the youngest of three brothers to all come through the Arsenal academy, but is the only one currently at the club – Matty, 22, is on loan at St Mirren from Manchester United, while Chris, 20, is at Benfica.

Nketiah hit the headlines last season when he came off the bench in the 85th minute against Norwich to score two goals and take Arsenal through to the next round of the League Cup. A capable striker with bags of energy, Nketiah is tipped for a bright future at Arsenal.

Saka featured on the left against Qarabag last week and caught the eye with his running down the wing. He was unlucky not to find the net too. Emery liked what he saw, saying after the game: “Today Saka played with a good performance, with a very big personality.”

Michael Owen was also impressed with the 17-year-old. “Just him having the courage to run at players was really refreshing to see,” he told BT Sport. “Some of the skill…I watched Ronaldo doing this the other day for Juventus.” Not a bad comparison.

A Scottish central midfielder with great promise, Gilmour signed for Arsenal when he was just six. His inspiration is Santi Cazorla and he said recently: “I use both feet and am developing my skills with Santi as a model.”

Pleguezuelo has been at Arsenal since 2013, having signed from Barcelona. A highly-rated defender who has captained the Under-21 side, he made his long-awaited Arsenal debut against Blackpool in the League Cup this October.