Everything Gary Neville has said about Arsenal & Arteta in 22-23 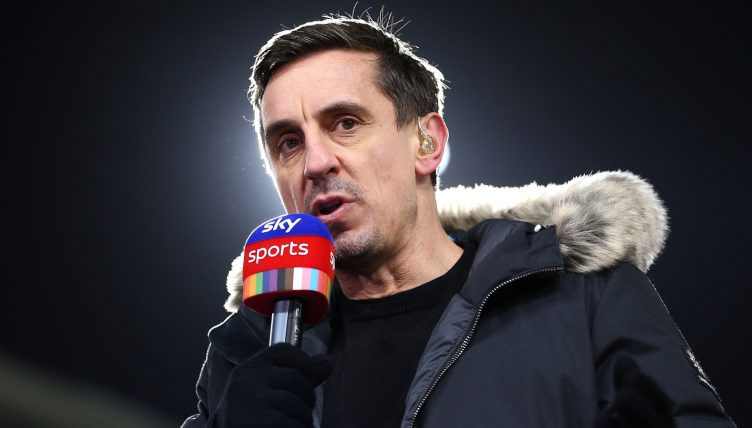 Arsenal’s sensational form in the 2022-23 season has caught plenty of pundits by surprise, but perhaps none more so than Gary Neville.

Neville prides himself on his pragmatic takes and knowledgeable insight, but Arsenal’s transformation from Europa League also-rans to serious title contenders has caught the former Manchester United defender unawares.

As recently as March 2022, Neville had said: “My concern is if Arsenal finish fourth this season – which to be fair, I think is 50/50, I still think there’s a long way to go in that race – but if they finish fourth, that’s in some ways as good as it gets.

“Mikel Arteta is a brilliant coach, I love that we’re seeing a team that he’s getting the maximum out of, I can see exactly how he wants to play, we all can.

“But he gets to fourth [and] if he was really hard about it, he’d probably say ‘right, that’s the best I can do there, I’m going now and getting my next job’.”

As Gooners pinch themselves at the prospect of a first league title since 2004, we’ve collected together everything Neville has said about Arsenal this season.

Bolstered by the signings of Gabriel Jesus and Oleksandr Zinchenko, Arsenal fans were optimistic heading into 2022-23.

But Neville, speaking on The Overlap, said: “I just worry about the experience in terms of a young manager.

“‘To be fair, it’s not unfounded, the evidence is there! Last season, Arsenal should have finished in the top four. But in the end the experience of Antonio Conte, the experience of the Tottenham Hotspur players [meant they didn’t].

“In that game, Spurs’ experience on that night, it was alarming how naïve Arsenal were and how short they were. My concern is just purely around [that].

“I know Chelsea and Manchester United are struggling a bit in terms of where they are and they might both blow up, but I think both will have to happen in order for Arsenal to land in the top four.”

Despite preaching caution, Neville believed Arsenal would finish above his former side – at this point, anyway.

“There’s definitely more questions on United because they haven’t got their business done and their star player is in a position where he might leave. You have to say Arsenal.”

Despite their fast start, many observers began to take Arsenal seriously when they beat Liverpool in a thrilling encounter in October.

Speaking after the 3-2 victory, Neville told Sky Sports viewers: “Huge day for Arsenal, it was a big test, and they have come through it in the second half. They outran Liverpool and outplayed them.

“He [Mikel Arteta] is so relieved, I was worried about him at the end of last season when they didn’t qualify for the Champions League, thinking it could be fatal for him.

But the recruitment in the summer has been good and the start to the season has been electric. They are going neck to neck with Man City at the moment, which is some achievement in itself.”

🗣 "The tough part of the season for Arsenal is still to come."@GNev2 believes that despite Arsenal beating Tottenham and Liverpool, they still have a big test around the corner pic.twitter.com/eBmtyBpaoV

“We have to question Arsenal,” Neville said on the Sky Sports Gary Neville podcast.

“Arsenal fans come at me every single week, every single week, because I will still continue to question them until I don’t see a moment like I did with five or six games to go last season and they get through those moments and they finish in the top four.

“They haven’t proven it yet. It’s like a boxer who hasn’t won a title. You have to question them. But what you can’t question is that was a really, really good performance.

“It’s still very early in the season and we’ve got this unique break for the World Cup, we don’t know how players are going to react to that. There has to be questions because we don’t know what will happen after that but Arsenal have been fantastic in this first part of the season.”

He went on to predict: “I do think they’re bang on to finish in the top four. I think they’ll fall behind Man City by some distance but that would be no shame. If they finish second that would be a magnificent achievement for Mikel Arteta.

“I’m getting more confident that it’s going to happen but I don’t think we’re wrong to continue to question because they haven’t proved it yet.”

‘And that’s the sort of conundrum that will be going through the Arsenal board’s mind at this moment in time.

The Sky Sports pundit again predicted Arteta’s side would fall away, saying: “I don’t think they’ll win the title, I think City will. I do think they will get into the top four. But I do think it will be interesting, come sort of February and March, where they end up.

‘Because I still think there will be an element of them still having to prove themselves. I’ll say it time and time again until they show me different.

Gary Neville on #Arsenal this season 😅

After watching Arsenal ease past Tottenham to go eight points clear at the Premier League summit, Neville caused an epidemic of dropped jaws in north London by claiming both Manchester clubs would still finish above the Gunners.

Speaking on Sky Sports, he said: “They won’t win the league. Manchester City will win the league, and I think Man Utd will finish second, and I know that will annoy Arsenal fans!

“I’d rather Arsenal win the league than Man City. I think it would be absolutely sensational for the Premier League.

“The reality of it is, I think at some point Man City will hit a run. Once they do, they’ve got to play Arsenal twice.

“If Erling Haaland starts to kick on, if City start to purr, if the defence starts to shore up a bit more than it has done, and they need Ruben Dias back if they can, I think City will win it.

“At some point, there will be a very difficult period for Arsenal this season. Is it conceivable that Arsenal are going to continue as they are? I don’t think it is.

“Could they draw two and lose one in a three-game period, and if they did that, their lead is gone, and the pack is up with them?

“That’s what I think is going to happen, we’ll see a traditional Premier League season where a team goes out, the pacemaker, and then they’ll get drawn back in a little bit.”

Gary Neville: "No. Manchester City will win the league and Manchester United will finish second"

But the former England defender still praised Arteta for his work at the Emirates.

“It’s so difficult for young managers to break that [Antonio] Conte, [Jurgen] Klopp, [Carlo] Ancelotti, [Pep] Guardiola, [Jose] Mourinho mould and become one of those super managers,” Neville said. “You can’t break them.

“If Arteta wins the league this season, he breaks into that bunch. He’s doing it anyway, because his football is fantastic. But he needs to win that trophy.”