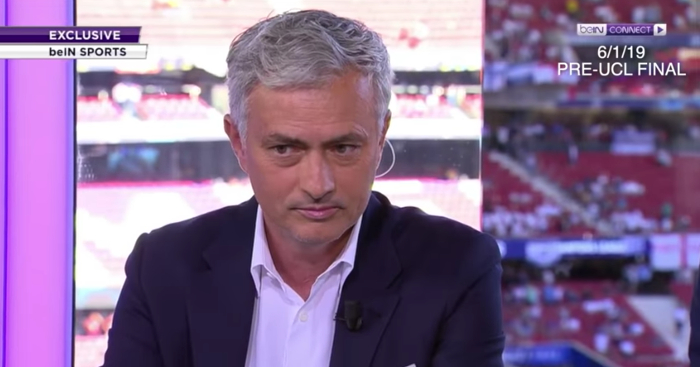 Jose Mourinho is Tottenham‘s new manager – but just a few months ago he was giving his thoughts on the team on Champions League final night.

The former Manchester United and Chelsea coach has taken over from Mauricio Pochettino, who was relieved of his duties after five years earlier in the week.

What he said about Spurs as a pundit for beIN Sports alongside Arsene Wenger back in May will certainly be of interest to the club’s fans, from how they got to the final, to the squad, their transfer business and his analysis of the game itself.

On run to the final

“I think it’s not fair for people to say one of them failed,” he said, speaking before the game.

“In the case of the managers, even more. They are in the club for four years, I think, and they both couldn’t win a trophy.

“I think we are here to protect the loser because the loser doesn’t deserve to be called a loser tonight, because they both did amazingly well to be here.”

These quotes should be of particular interest to Daniel Levy, and he may well have repeated them in his interview for the job.

“I think that a team needs to buy players when the players they have are not good enough.

“When the players are good enough, the best you can do is not to sell them, not to lose them, so I think the big business that Tottenham did in the last couple of years, is to have offers for Kane, for Eriksen, for Dele Alli, for Verthonghen, for all of them and not to sell any of them.

“This is the best business that they could do.”

“The reality is that Tottenham had 61% of possession but had zero shots on target. And they missed lots of passes, they couldn’t link the play.

“Harry Kane was hidden all the time,” Mourinho noted of his new centre-forward.

Analysis on another level! 🙌

Arsene Wenger and Jose Mourinho give their thoughts on that first half (Spoiler: they both agree with each other AGAIN!)

“Mr Wenger is speaking about two set-pieces (for Liverpool) and I can add, three shots on target in 90 minutes, two goals and the two goals in set-pieces.

“I think the three midfield players of Liverpool, if we are going to see the wave of their positioning, a shadow, they play in a straight line in front of the back four.

“They played with a block of seven, they were very pragmatic, they were very solid defensively. And when Tottenham managed to do something, to create something, the player that missed them last season, was there today. He was not phenomenal, but he had a couple of saves to stop Tottenham to draw.

“If this match is not the Champions League final, if it’s a Premier League match, if it’s the final of the League Cup, we would all say the game was not good.

“Tottenham has to be frustrated, because they lost, but not just that. Because they feel that they are better than this, and in these big moments you have to be at your best level.”

“Mauricio has four very good years at Spurs, brings Spurs to the final of the Champions League and he’s still waiting for the first trophy, with not just Tottenham but the first trophy of his career.

“I feel very sorry for Mauricio, but I think – and Mr Wenger worked in England much more years than me – I think the English supporter is very loyal, and they know when people give everything, and they are a bit different in other countries where everything is about just the winning.

“I think the Tottenham fans are proud of their team, they still look to this team, to this manager. It’s a historical team that’s took to the first time to the Champions League final so I think Tottenham will feel some love at home.

“I think next season when they go back to their stadium, back to life, back to business, they will go with the pride of what they did and not in a low.”