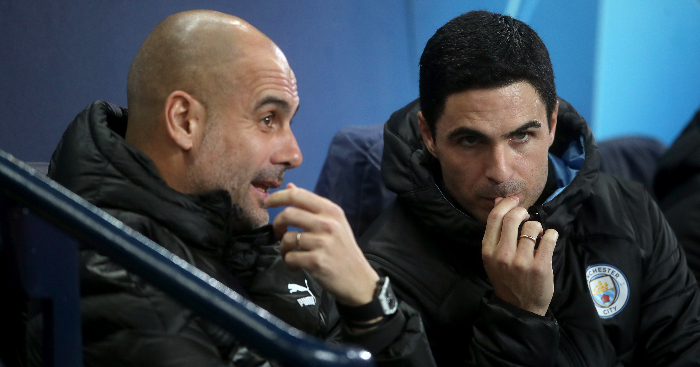 There will be no lack of respect between Pep Guardiola and his old friend and assistant Mikel Arteta when Manchester City host Arsenal on Saturday.

The pair’s relationship stretches back over two decades, when Guardiola was winding down his playing career at boyhood club Barcelona and Arteta was following in his footsteps and emerging through the youth set-up, before the duo reunited as manager and assistant manager at Manchester City.

City cruised to a 3-0 victory in Arteta’s first visit back to the Etihad since being appointing Arsenal manager last December, but he got his revenge with a 2-0 victory in the FA Cup semi-final at Wembley in August. But there’s always been mutual admiration between the two.

“He’s helped me a lot,” Guardiola told The Times last September, speaking about his assistant at the time.

“From day one, so not just the last two seasons, from day one. He has an incredible work ethic, and he has a special talent to analyse what happens, and to find the solutions.

“He can tell me about the players we will face better than myself, because he played against them and was in the Premier League for 10 or 11 years. That’s a long time.

“He’s so happy when we win but suffers when we don’t and that is why he tries to find a solution. He’s an incredible human being, with incredible values about what it means in the locker room to be together, and he is already an incredible manager and he’ll have incredible success in his future.

“We see the football in really quite a close way.”

"They could be brothers!

The similarities in management style between Mikel Arteta and Pep Guardiola are clear for all to see 👊#EmiratesFACup pic.twitter.com/jNCxyoUyJn

Guardiola has kept up the same respectful and flattering tone since Arteta left to succeed Unai Emery at Arsenal and was looking forward to their first meeting as opposition matches in the first match back after the lockdown hiatus in the summer.

“I’m so excited to see him, one of the nicest people I ever met. It was a joy for me and for all of us to work with him,” he said pre-match.

“The feeling I have is he’s happy there and doing an incredible job. I’m looking forward to seeing him.”

The City boss later added when coming up against Arteta’s Arsenal in the FA Cup semi-final back in July, which the Gunners went on win 2-0: “They have something special already, they have a team spirit Mikel has created.

“Arsenal were one of the elite clubs in English football for the last 20, 30 years. I am pretty sure he is the right person to take them back to the position they were.

“When the club supports him there is no better person to do the job than Mikel. I have the feeling he is creating something unique. If he can be supported by the club with investment, get the players they need, they can be contenders for the next years.”

“Well, he [Guardiola] was an influence for me since I was 15 years old and we met at Barcelona, both as players,” said the Gunners coach ahead of his first managerial meeting with his old mentor in June.

“And in my coaching career and my personal life, he has an enormous influence.

“If I have to talk about the person he is, his values, the way he has treated me and how he deals with the players and the staff around him, it’s phenomenal.

“As a coach, I have learned so much from him, we have spent some amazing moments together, some difficult ones as well, but the experience next to him has been incredible.”

Arteta after winning his first title with Arsenal “Thank you Pep Guardiola. I am a manager because of you” #Pep pic.twitter.com/AqVC5dZTH5

“He has been a key figure in my development as a coach,” he added in his post-match press conference after leading Arsenal to the FA Cup at Wembley in August.

“He has my gratitude. I wouldn’t be sitting here today without him. I have to thank him big time.”