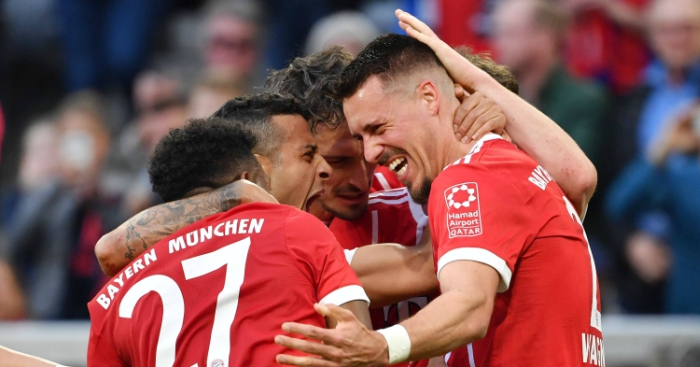 Manchester City and PSG both won their respective leagues at the weekend, while Bayern Munich claimed the Bundesliga title at the start of the month – but there’s still plenty not yet decided in Europe.

Outside of those league winners, there is still a lot to play for in the big four leagues, with the vast majority of Champions League qualification places still up for grabs.

With less than a month until the season’s end, we decided to take a look at what is left to be played for in each of the top leagues, with European football, relegation and promotion all at stake.

Despite still being unbeaten in the league, Barcelona are yet to secure the La Liga trophy, with Atletico currently 11 points behind them with six games to play.

The pair have both already secured qualification to next season’s Champions League, with Real Madrid and Valencia not far off, then a significant gap to fifth-placed Real Betis.

Despite their impressive performances in Europe, Sevilla are only seventh in the league, which earns a spot in the Europa League qualifying round, but the chasing pack is large and well within reach.

At the other end, Las Palmas and Malaga are cut adrift, 10 and 14 points from safety respectively, while it would be a good achievement for Clarence Seedorf’s Deportivo La Coruna to escape the relegation zone.

They are five points off fourth-bottom Levante, with a further five points to 16th-placed Espanyol.

In the second tier, Rayo Vallecano and Sporting Gijon are neck and neck at the top of the table, while Barcelona B – the only second team still in the Segunda Division – are in danger of being relegated.

RECORD: Barcelona have now gone 39 games without losing in LaLiga; the longest unbeaten run in the competition's history.

In their straight battle for the Italian title, both Juventus and Napoli have qualified for the Champions League with six games of the season remaining.

Napoli currently lie in second spot, six points off the top, but the pair meet on Sunday at the Juventus Stadium.

It’s a case of three into two with the remaining two Champions League spots, with Inter currently one point off Lazio and Roma.

Only Bologna and Genoa are left with nothing to play for, with 13th placed Udinese just six points above third-bottom Crotone.

League first-timers Benevento are all-but down, while SPAL, in the top tier for the first time in 49 years, and after two reformations, sit just one point above the drop.

The second tier is littered with stellar names, Empoli and Parma currently holding the automatic promotion spots, though with six-team play-offs as well as “relegation play-outs” anything could happen.

If we beat Napoli next Sunday at the Juventus stadium then the Scudetto race is practically over. Forza ragazzi. ⚫️⚪️ pic.twitter.com/kzBqXygutH

Bayern Munich’s stronghold on German football continues as they have already secured their sixth successive Bundesliga title, and their 13th since the turn of the millennium.

Schalke, in second, are the only team to secure themselves at least a Europa League spot with just four games remaining.

RB Leipzig, Hoffenheim and Eintracht Frankfurt are all in with a shout of making the top four, though the third and fourth placed spots are currently occupied by Bayer Leverkusen and Borussia Dortmund.

FC Koln and Hamburg look set for relegation as they sit nine and eight points from safety, while it is a three-way race to avoid finishing in the relegation play-off spot.

If Mainz were to win their game in hand, they could draw level on points with Wolfsburg and Freiburg – their opponents for said game in hand.

The top three of 2.Bundesliga is Fortuna Dusseldorf, Nurnberg and Holstein Kiel, a side who have never played in the Bundesliga before, with third place playing in the play-off for the final Bundesliga spot.

A spectacularly tight division, current bottom side Kaiserslautern could theoretically finish as high as eighth, while technically Kiel could still find themselves in either the promotion or relegation play-off.

Bundesliga 2 is mad. The team in 4th could still go down pic.twitter.com/aqKjMwuNoJ

The French league table is the most complete in Europe: PSG having already secured the title, while Monaco, Lyon and Marseille have all assured themselves Europa League spots, the trio fighting for two remaining places in the Champions League.

Metz find themselves bottom of the division, five points from safety, with Troyes and Lille both on 29 points, France being another country to employ a relegation/promotion play-off.

The Domino’s Ligue 2 (yes the pizza) sees Reims at the top, with Nimes and Ajaccio fighting for automatic promotion.