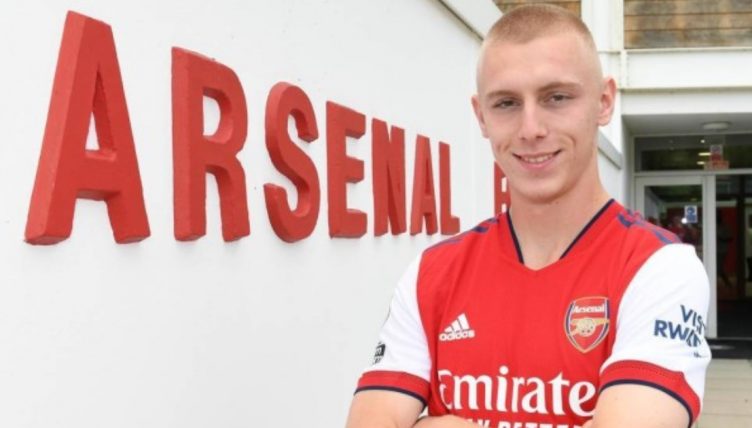 Bukayo Saka, Emile Smith Rowe… Arsenal have reared some brilliant young footballers recently and Mika Biereth may be the next to make an impression at the Emirates.

Biereth joined the club from Fulham this summer and his form for their Under-23 side has reportedly caught manager Mikel Arteta’s attention. While a loan move has been planned for the 18-year-old, Biereth may yet get his opportunity in one of the domestic cup competitions in the near future.

We’ve compiled everything you need to know about the young Arsenal striker that may be appearing in the first team soon.

Born in 2003, Biereth first caught the eye with his goalscoring prowess at Fulham.

Fulham blitzed all before them, including Arsenal, Chelsea and Tottenham, to win their second consecutive Premier League South title last season.

And Biereth was central to their charge, scoring 21 goals in as many games, as well as providing 13 assists. But Fulham ultimately came up short against Manchester City in the Premier League National final and failed to qualify for European football.

With the Cottagers suffering relegation from the Premier League, it’s perhaps not surprising that Biereth attracted attention from bigger fish and Arsenal signed the striker after he turned down a professional contract with Fulham.

The 18-year-old has hit the ground running at Arsenal. In 12 PL2 appearances this season, Biereth has five goals and three assists which has attracted the attention of Arteta.

Football.London have reported that he will now get a chance to train with the senior team, with Arsenal prepared to give him the chance to join another club on loan for the 2022-23 season so he can get regular first-team chances.

Biereth has also received his first call-up to the Denmark Under-19s this season and scored his first international goal in a win over Georgia in November 2021.

Although he is usually deployed upfront, Biereth is also capable of playing out wide or as an attacking midfielder – demonstrating the versatility that would make him an asset to any Premier League club.

His goal against Chelsea this season showed just how good he can be. Latching on to a long pass from Florian Balogun, Biereth acrobatically lofted the ball over the goalkeeper before wheeling away in delight.

That combination of athleticism, poise and improvisation makes Biereth stand out amongst his peers.

While Biereth possesses a goalscoring record that demands respect, he seems to be playing more of a supporting role to Balogun for Arsenal this season.

Of course, this is no bad thing as it allows the young striker to further develop aspects of his game. According to staff at Arsenal, his link-up and hold-up play are already showing signs of improvement.

This shows how Biereth’s game has already evolved since joining Arsenal and his potential is yet to be fully explored. Expect big things from the 18-year-old.

📍 That pass
🔥 That finish

↩️ Throwing it back to this perfect link-up vs Chelsea@balogun 🤝 Biereth pic.twitter.com/9QVizx9sl6

“To be honest, I don’t get too hung up with stats because I know that strikers go through hot patches and cold patches,” he said in an interview with Arsenal’s official website in September 2021.

“It’s important to stay balanced. I just go into every game hoping to score and then over the course of the season, those numbers tend to tally up anyway.

“Sometimes you can go three or four games without scoring, but then end up with a hat-trick in the following match. I just try to remain level-headed with that.

“It’s funny because, while I’m not overly big on the numbers, my dad definitely is. In fact, he’s kept stats on me since my first Sunday league game! He’s got stats on everything – even down to the percentage of goals I’ve been involved in.

“He keeps an in-depth Excel spreadsheet of them.”

“The recruitment team did a terrific job in bringing him to the club and he’s a boy who has a fantastic character and attitude,” said Kevin Betsy, the Head Youth coach at Arsenal.

“His willingness to work for the team is excellent, his movement to get into space in behind is also very prominent in his game and he can finish. He’s a really good finisher.”