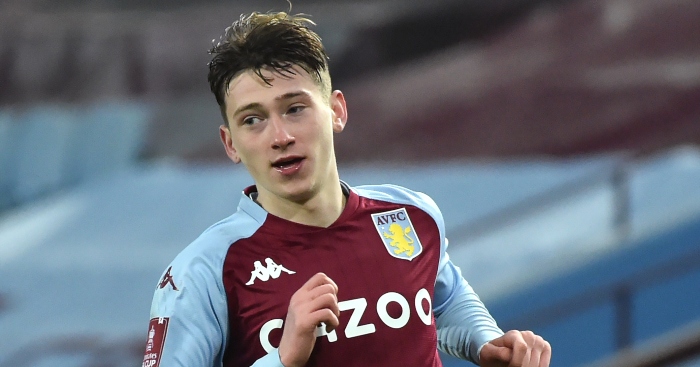 After being thrown into the deep end against Liverpool in the FA Cup, Aston Villa‘s Louie Barry marked his debut with a famous equaliser.

Barry, no relation to club legend Gareth, was called into action after the entire Villa first-team squad were placed into self-isolation. A promising player in the club’s academy, the 17-year-old’s exploits against the league champions will do his career prospects no harm.

He is one of England’s most exciting young talents, and we’ve brought you the lowdown on the Villa prospect.

Born in Birmingham in 2003, Barry grew up a massive Villa fan but actually started his career at local rivals West Bromwich Albion.

He reached Under-18 level at the age of just 15 and was even named on the bench for their Under-23s for an EFL Trophy clash with Blackpool.

Despite having a medical with PSG, he was eventually lured to Barcelona in 2019, becoming the first-ever English player to join the Catalan giants’ famed La Masia academy.

This deal proved controversial. In September 2019, West Brom announced they were going to report Barcelona to FIFA over the transfer, claiming that they had not received the compensation they were due. The wrangling that ensured meant Barry missed the first three months of the season.

Making his debut for Barca under-19s in October 2019, Barry scored during a 6-0 win over Ebro and then made three appearances in the UEFA Youth League.

Having demonstrated his talent in Spain, it wasn’t long before his boyhood club came calling, and he joined Villa in January 2020 for an initial fee of £800,000.

Later that season, he started training with the first-team and now has seven goals in his first 10 appearances for their Under-23s in Premier League 2.

Oh my goodness, Aston Villa have scored a brilliant goal to equalise against Liverpool! 😱

Louie Barry has put his name up in lights and he can't quite believe it!#EmiratesFACup pic.twitter.com/WrKE2yG0ZR

The forward, who can play as a striker or on the wing, is known for his strong work rate and constantly pressurising the opposition when they are on the ball.

Barry already has a wide array of skills, combining the clever movement and clinical finishing of a top-class centre forward with the incredible dribbling ability of a tricky winger.

– “Louie has been an academy signing first and foremost but he is one with an awful lot of potential,” Dean Smith said in January 2020.

“I saw him for 20 minutes in a game last week for the under-23s. He has really good movement and is a bright young kid. I am sure he will be a hit at Aston Villa but we can’t forget he is only 16.

“I am excited by the potential he has got, that is for sure. That is why we have gone and got him.”

– “He is still a very young man but as he’s developed, he’s always been one player that you always recognise as having outstanding attributes,” academy manager Mark Harrison told VillaTV. “He’s got a fantastic mentality, he’s desperate to do well for this football club.

“He’s really driven, he’s got great family support, but in terms of what he can achieve, we firmly believe that he can be an outstanding number nine for this football club.”

– “This Louie Barry, he looks like a young Jamie Vardy!” Jurgen Klopp said after seeing Barry score against his Liverpool side.

– Speaking to the Birmingham Mail after moving to Villa Park, Barry said: “I understand they’re quite fired up about it. I loved West Brom as a club. I was there from the age of six to 15. I will always have love for them and will never say a bad word against them.

“I came to Aston Villa to work with Mark Harrison. I just wanted to come back. I really enjoyed it at Barcelona. I am coming back home – but I wasn’t homesick. I was born in Aston. I have supported Villa all my life.”

– “The ball came through from Rowie and I knew that I had it as soon as I seen it,” Barry told BT Sport after scoring against Liverpool. “I put the ball in the back of the net and obviously it was the proudest I’ve ever been in myself.

When I scored I thought we might have a chance but obviously, it wasn’t meant to be. I was cramping up towards the end but with age comes more physicality and mentality.”

An ode to Alan Hutton at Aston Villa: From the bomb squad to Scottish Cafu