Everything you need to know about Man United target Borna Sosa 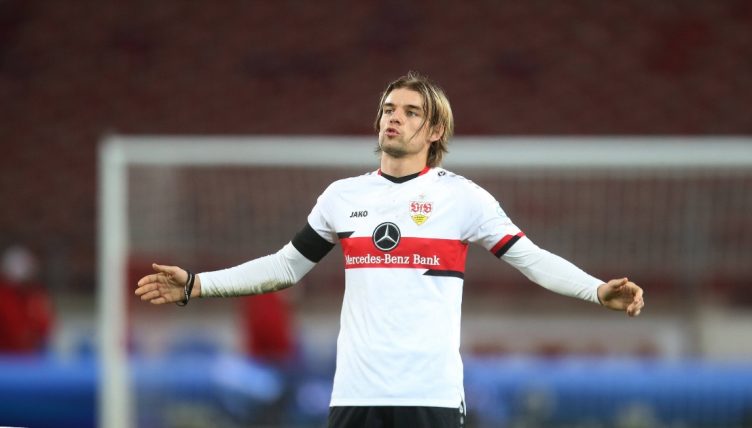 Manchester United are in the market for a new left-back this summer – and Erik ten Hag has reportedly identified Stuttgart’s Borna Sosa.

Sosa, who has also been linked with Arsenal, Chelsea and Tottenham in recent months, is reportedly valued at around £21million and could become part of Ten Hag’s rebuild at Old Trafford.

We’ve compiled everything you need to know about the Croatia international.

Like most of the talent in Croatian football, Borna Sosa came through the academy of serial champions Dinamo Zagreb.

Whereas the trio of Dejan Lovren, Mateo Kovacic and Luka Modric played upwards of 60 matches for the club, Sosa was prized away after just one season for Dinamo, moving to Stuttgart in 2018.

After seeing his first two seasons in Germany disrupted by injuries, Sosa found form and consistency in Pellegrino Matarazzo’s 3-4-2-1 formation as Stuttgart made a decent fist of their Bundesliga return.

After registering nine assists in the Bundesliga in 2020-21, he has eight in 2021-22. Hoffenheim’s David Raum and Freiburg’s Christian Gunter are the only defenders to have registered more this season.

With star striker Sasa Kalajdzic clocking in as the tallest player in the Bundesliga, Sosa has had the ideal recipient for all of his creative production.

His exploits have led to international recognition – but not without a little controversy.

In May 2021, it was announced that Sosa had been given German citizenship with the expectation he’d be selected for that summer’s European Championship.

But it was soon discovered that the defender was ineligible to represent Germany under FIFA rules. After issuing an apology to the Croatian public, Sosa made his international debut for the 2018 World Cup runners-up in August 2021.

He soon became a national hero in the crucial World Cup qualifier with Russia in November 2021, providing the cross that caused Fyodor Kudryashov’s own goal and sent Croatia to Qatar.

Reports in January 2022 linked Sosa with a move to Chelsea – to replace the injured Ben Chilwell – and Aston Villa before they signed Lucas Digne.

And German outlet Kicker are now reporting that new Ten Hag wants to bring him to Old Trafford in the summer.

Sosa’s style of play revolves around crossing the ball. Everything else is secondary.

He’s renowned for his ‘deep crosses’ and has an almost unravelled ability to pick out a man in the most crowded of penalty areas from 20 or 30 yards away.

At 6ft 2in, Sosa can play either left-back or left wing-back and his versatility would make him an asset to a number of Premier League managers.

With Stuttgart struggling this season, partly because of injuries to Kalajdzic, Sosa has been unable to showcase his crossing abilities as often as last year.

Most of his standout moments have come when going directly towards goal himself or, when he has been sparingly used from the right, cutting into the halfspaces and combining as an auxiliary midfielder.

An 🅰️🅰️🅰️ start to the #Bundesliga season for Borna Sosa! 🙇‍♂️ pic.twitter.com/azsGdJG1W3

– “When I came to Stuttgart, Mario Gomez told me he hadn’t been served these kinds of crosses since his time at Bayern Munich. That was great to hear, and motivates me to this day,” Sosa said in relation to his uptick in goals and assists.

“As far as I can remember, my strengths have always been my speed and a good left foot. Not just crosses but in general. Passing, shooting, free kicks, corners, et cetera. Regardless of which team I played in, I was the fastest in testing.”

– When asked about his weaknesses by the Bundesliga website in 2021, the full-back said:  “I wouldn’t call it a weakness, but because I’ve not done so much of it, is defending.

“Because I grew up playing football at Dinamo and we always played offensively, always to win, in every game. And so you automatically have less defensive tasks.”

– He admitted that, while David Alaba was an inspiration growing up, his idol was more obvious, saying: “David Alaba was my favourite player in my position. Because back then he played left-back, today he plays as a centre-back.

“He was really my favourite player in my position, but overall my idol was Leo Messi.”

– “Borna Sosa has blossomed,” said Stuttgart manager Matarazzo back in 2020. “We knew he had enormous potential. He plays very consistently over 90 minutes. We’re really glad.”

– “Borna’s said himself that David Beckham is his role model, and I think he has the same qualities,” Stuttgart sporting director Sven Mislintat told Bild.

– Former Germany international Didi Hamann has backed Sosa to be a success in the Premier League should he move to England.

Speaking about rumours linking Sosa with Chelsea, Hamman said in February 2022: “There was actually talk of him [Sosa] being sold a couple of years back, but he’s come back to life with the arrival of Kalajdzic.

“He crosses the ball as well as anyone around and I think he’s assisted at least half of the goals Kalajdzic has scored this season.

“He’s a danger going forward and he’s very good at defending his own goal as well.

“I think he’s a very decent player who could do a job in the Premier League and at a club like Chelsea.”