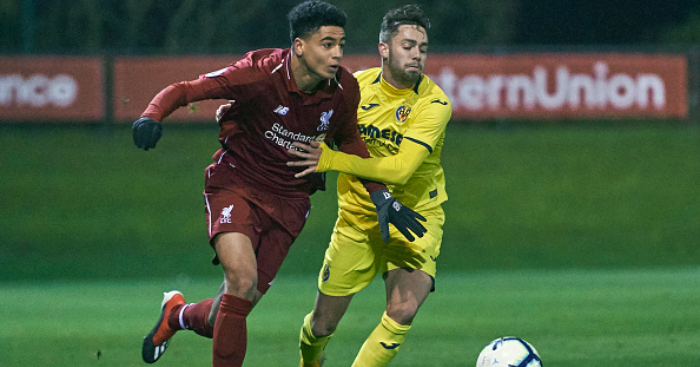 Sixteen-year-old Ki-Jana Hoever had a day to remember last week when he trained with the Liverpool first team for the first time.

Hoever has caught the eye playing for the club’s youth sides and Jurgen Klopp asked him to join senior training at Melwood.

While it would be bold even by Klopp’s standards to expect Hoever to start against Manchester United on Sunday, his rise through the ranks at Liverpool has taken place at remarkable speed.

Hoever joined Liverpool this summer from Ajax, completing his move in September once he was granted international clearance, and he bears all the hallmarks of a Dutch youth prospect.

Born in Amsterdam, Hoever started his time at Liverpool in Barry Lewtas’ Under-18s, playing in the U18 Premier League and UEFA Youth League.

He was then called up to the Under-23s last month and shone in his debut against league leaders Everton at Goodison Park.

Hoever has already been called up to the Netherlands Under-17 squad, scoring three goals in five games. Not bad for a defender.

Hoever has featured predominantly as a right-back so far but can also play in the centre. It’s hard to think of many better mentors than fellow Dutchman Virgil van Dijk at centre back, and Hoever will have no doubt enjoyed linking up with him at first-team training last week.

He played further up the pitch on his Under-23 debut at Everton, as a right-winger, showing the typical versatility of an Ajax academy graduate.

“Unbelievable. Sixteen. Wow,” was the assessment of Liverpool Under-23 boss Neil Critchley following his recent debut.

“Considering he played in the week as well…He tired towards the end, which was understandable. But I thought his calmness and assurance, his decision-making, his intelligence without the ball, it was terrific.

“Playing against a good player, I was very impressed with him indeed.”

“We are all keeping our feet on the floor with him. He’s still got a lot to do, sometimes you can ride the wave when you first get into teams, but he knows it’s a long process.

“He’s very mature, he’s a good boy and he knows he’s got lots to improve on.”