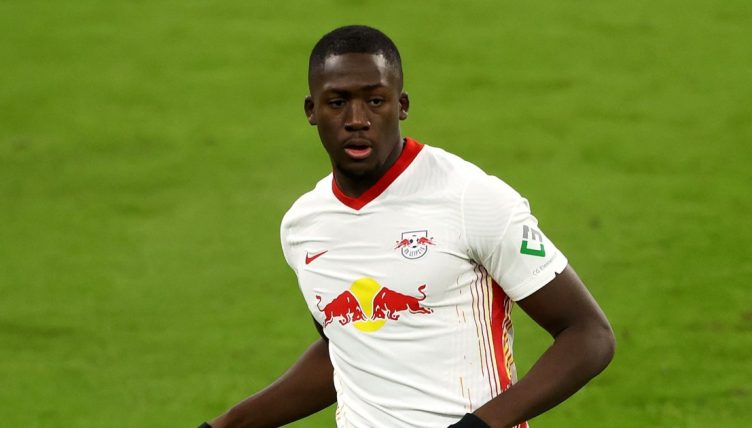 After a difficult 2020-21, Liverpool are already making plans for next season and are reportedly set to sign RB Leipzig’s Ibrahima Konate.

According to The Athletic, Liverpool are in the process of finalising a deal to bring Konate to Anfield and they will have to pay his €40million buyout clause.

We’ve brought you the lowdown on the 21-year-old, who has previously been linked with Manchester United, Chelsea and Arsenal.

Born in Paris, Konate started his career at local side Paris FC and spent five years in their academy before joining Sochaux in 2014.

He made his first-team debut at the age of 17 in the Coupe de la Ligue in January 2017 and went on to make 12 Ligue 2 appearances, scoring one goal in the process.

After Konate decided not to sign a new contract with Sochaux, Bundesliga side RB Leipzig won the race for his signature in the summer of 2017.

The 21-year-old enjoyed a promising debut season at Leipzig under Ralph Hasenhuttl before cementing his place in the side in 2018-19.

He made 43 appearances in all competitions during his second season, helping Die Roten Bullen reach the DFB-Pokal final and finish third in the Bundesliga.

However, a string of injury problems have restricted him to just 17 Bundesliga appearances since the start of 2019-20 and his team-mates have nicknamed him ‘Ibuprofen’.

Konate is yet to represent France at senior level but has made 12 appearances for their Under-21s and is currently playing at the European Under-21 European Championship.

Konate is a commanding, modern-day centre-back who often plays on the right side of a back four or a back three.

Standing at 6’4”, he wins most of his aerial duels and cuts an imposing figure at the back, refusing to be bullied by more experienced strikers.

The 21-year-old also has the pace to match the quickest of attackers and can play out from the back with excellent composure on the ball.

He has formed an impressive partnership alongside compatriot Dayot Upamecano, who recently agreed to join fellow Bundesliga side Bayern Munich.

Konate to The Reds then?pic.twitter.com/aV40G3o3Sy

– “I’ve developed well and I enjoy the style of play you encounter in the Bundesliga every week: it’s attack-minded with lots of pace and passion,” Konate said in 2019.

– “I wasn’t born a defender,” Konate told Bild in 2019. “I was as a midfielder for a long time and even played as a striker. And you can see that I got something out of that. It means I can move forward a bit too.”

– “My idol is Sergio Ramos. For me, Sergio is like Vegeta. He always works,” Konate said on UMM’s YouTube channel in February 2021.

Konate saying Sergio Ramos is his idol and the best defender in the world pic.twitter.com/9Tlviuu84L

“He’s a young, highly-gifted player who’ll strengthen our defence. We’re very happy to have been able to bring in this top talent and that Ibrahima can take the next step in his career here.

“He shows great qualities despite being only 18, and we’re convinced he’ll bring us a lot of joy.”

– “I’m obviously delighted with Konate and Upamecano’s development,” Hasenhuttl said in 2018. “They have made huge strides this past year and gained valuable experience.”

– “I’m particularly delighted with our coup in signing Ibrahima Konate,” Rangnick said in 2019. “We got him on a free transfer from Sochaux. He’s is so good that he could play for Real Madrid or Barcelona one day.”

– “There are a few others in Leipzig: I see Ibrahim Konate on the same level [as Upamecano],” Ragnick told Sport1 in November 2020.

–  “I think the release clause [for Ibrahima Konate] is €40million,” said Guido Schafer, a former teammate of Jurgen Klopp’s at Mainz and a journalist currently covering RB Leipzig, on an Under The Radar podcast.

“It is a really good price for the player – he is only 21 years old and he is as good as Dayot Upamecano when he is fit. They are absolutely at the same level.

“He is tall, fast, good technique and he is a little bit of Virgil van Dijk. He is the chief, in a positive way, of the French connection in the Leipzig squad, on and off the field. He learned German as fast as no other guy.

“He has very high-class potential. He is a great athlete, he has good speed and there are no silly tackles – he is an intelligent player. And in the 100 metres, Konate is the fastest player in RB Leipzig.

“It is a potentially world-class package. He is really good in passing and that is from Julian Nagelsmann – he needs players who can pass. Konate is the right player for [teams who play out from the back] and for Liverpool.”